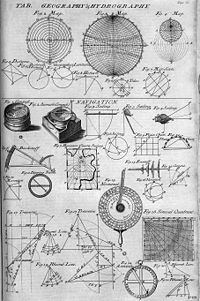 Table of geography, hydrography, and navigation, from the 1728 Cyclopaedia.

Large scale hydrography is usually undertaken by national or international organizations that sponsor data collection through precise surveys and the publication of charts and descriptive material for navigational purposes. The science of oceanography is, in part, an outgrowth of classical hydrography. In many respects the data are interchangeable, but marine hydrographic data will be particularly directed toward marine navigation and safety of that navigation. Marine resource exploration and exploitation is a significant application of hydrography, principally focused on the search for hydrocarbons.

Hydrographical measurements will include the tidal, current and wave information of physical oceanography. They will include bottom measurements, with particular emphasis on those marine geographical features that pose a hazard to navigation such as rocks, shoals, reefs and other features that obstruct ship passage. Unlike oceanography, hydrography will include shore features, natural and man-made, that aid in navigation. A hydrographic survey will therefore include accurate positions and representations of hills, mountains and even lights and towers that will aid in fixing a ship's position as well as the aspects of the sea and seabed.

Hydrography, mostly for reasons of safety, had adopted a number of conventions that affect its portrayal of the data collected for charting. For example, hydrographic charts are designed to portray what is safe for navigation, and therefore will usually tend to maintain least depths and occasionally de-emphasize the actual submarine topography that will be portrayed on bathymetric charts. The former are the mariner's tools to avoid accident. The latter are best representations of the actual seabed, as in a topographic map, for scientific and other purposes. Trends in hydrographic practice since ca. 2003-2005 have lead to a narrowing of this difference, with many more hydrographic offices maintaining "best observed" databases, and then making navigationaly "safe" products as required. This has been coupled with a preference for multi-use surveys, so that the same data collected for nautical charting purposes can also be used for bathymetric portrayal.

A hydrographic survey is quite different from a bathymetric survey in some important respects, particularly in a bias toward least depths due to the safety requirements of the former and geomorphologic descriptive requirements of the latter. Historically, this could include echo soundings being conducted under settings biased toward least depths, but in modern practice hydrographic surveys typically attempt to best measure the depths observed, with the adjustments for navigational safety being applied after the fact.

Hydrography of streams will include information on the stream bed, flows, water quality and surrounding land. Basin or Interior Hydrography pays special attention to rivers and potable water.

Hydrography's origin lies in the making of chart like drawings and notations made by individual mariners. These were usually the private property, even closely held secrets, of individuals who used them for commercial or military advantage. Eventually organizations, particularly navies, realized the collection of this individualized knowledge and distribution to their members gave an organizational advantage. The next step was to organize members to actively collect information. Thus were born dedicated hydrographic organizations for the collection, organization, publication and distribution of hydrography incorporated into charts and sailing directions.

An interesting historical relationship is that of James Whistler to hydrography. His artistic talents were applied to the sometimes beautiful shore profiles that appeared on charts during his work as a cartographer with both the civilian and naval U. S. hydrographic organizations. Those profiles on early charts were etchings designed to aid mariners in identifying their landfall and harbor approaches.

The United Kingdom Hydrographic Office is one of the oldest and most respected hydrography organisations in the world, supplying the widest range of charts covering the globe to other countries, allied military organisations and the public.