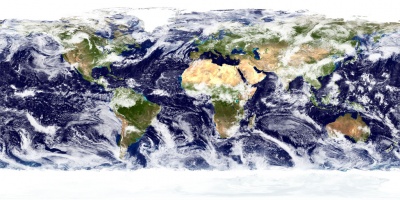 Water covers 70% of the Earth's surface. 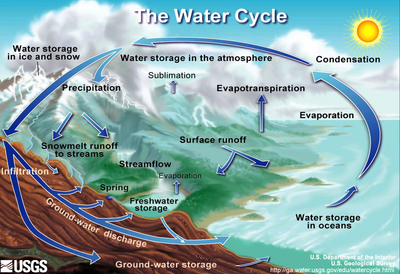 Schematic representation of the Hydrologic (or Water) Cycle

Hydrology (from Greek: Yδωϝ, hydŝr, "water"; and λόγος, logos, "study") is the study of the movement, distribution, and quality of water throughout Earth, and thus addresses both the hydrologic cycle and water resources. A practitioner of hydrology is a hydrologist, working within the fields of either earth or environmental science, physical geography or civil and environmental engineering.

Domains of hydrology include hydrometeorology, surface hydrology, hydrogeology, drainage basin management and water quality, where water plays the central role. Oceanography and meteorology are not included because water is only one of many important aspects.

Hydrological research is useful as it allows us to better understand the world in which we live, and also provides insight for environmental engineering, policy and planning.

Hydrology has been a subject of investigation and engineering for millennia. For example, about 4000 B.C. the Nile was dammed to improve agricultural productivity of previously barren lands. Mesopotamian towns were protected from flooding with high earthen walls. Aqueducts were built by the Greeks and Ancient Romans, while the History of China shows they built irrigation and flood control works. The ancient Sinhalese used hydrology to build complex irrigation Works in Sri Lanka, also known for invention of the Valve Pit which allowed construction of large reservoirs, anicuts and canals which still function.

Marcus Vitruvius, in the first century B.C., described a philosophical theory of the hydrologic cycle, in which precipitation falling in the mountains infiltrated the Earth's surface and led to streams and springs in the lowlands. With adoption of a more scientific approach, Leonardo da Vinci and Bernard Palissy independently reached an accurate representation of the hydrologic cycle. It was not until the 17th century that hydrologic variables began to be quantified.

Pioneers of the modern science of hydrology include Pierre Perrault, Edme Mariotte and Edmund Halley. By measuring rainfall, runoff, and drainage area, Perrault showed that rainfall was sufficient to account for flow of the Seine. Marriotte combined velocity and river cross-section measurements to obtain discharge, again in the Seine. Halley showed that the evaporation from the Mediterranean Sea was sufficient to account for the outflow of rivers flowing into the sea.

Since the 1950s, hydrology has been approached with a more theoretical basis than in the past, facilitated by advances in the physical understanding of hydrological processes and by the advent of computers and especially Geographic Information Systems (GIS).

The central theme of hydrology is that water moves throughout the Earth through different pathways and at different rates. The most vivid image of this is in the evaporation of water from the ocean, which forms clouds. These clouds drift over the land and produce rain. The rainwater flows into lakes, rivers, or aquifers. The water in lakes, rivers, and aquifers then either evaporates back to the atmosphere or eventually flows back to the ocean, completing a cycle.

Chemical hydrology is the study of the chemical characteristics of water.

Ecohydrology is the study of interactions between organisms and the hydrologic cycle.

Hydrogeology is the study of the presence and movement of water in aquifers.

Hydroinformatics is the adaptation of information technology to hydrology and water resources applications.

Hydrometeorology is the study of the transfer of water and energy between land and water body surfaces and the lower atmosphere.

Isotope hydrology is the study of the isotopic signatures of water.

Surface hydrology is the study of hydrologic processes that operate at or near Earth's surface.

Observations of hydrologic processes are used to make predictions of the future behaviour of hydrologic systems (water flow, water quality). One of the major current concerns in hydrologic research is the Prediction in Ungauged Basins (PUB), i.e. in basins where no or only very few data exist.

By analysing the statistical properties of hydrologic records, such as rainfall or river flow, hydrologists can estimate future hydrologic phenomena, assuming the characteristics of the processes remain unchanged.

These estimates are important for engineers and economists so that proper risk analysis can be performed to influence investment decisions in future infrastructure and to determine the yield reliability characteristics of water supply systems. Statistical information is utilised to formulate operating rules for large dams forming part of systems which include agricultural, industrial and residential demands.

Recent research in hydrologic modeling tries to have a more global approach to the understanding of the behaviour of hydrologic systems to make better predictions and to face the major challenges in water resources management.

Water movement is a significant means by which other material, such as soil or pollutants, are transported from place to place. Initial input to receiving waters may arise from a point source discharge or a line source or area source, such as surface runoff. Since the 1960s rather complex mathematical models have been developed, facilitated by the availability of high speed computers. The most common pollutant classes analyzed are nutrients, pesticides, total dissolved solids and sediment.