The index model, also known as the Fuzzy Suitability Model, is a probabilistic representation of nominal data. Values in the form of interval or ratio-scaled variables represent the level of certainty that a feature belongs to a nominal class.

In general, these numbers are assigned based on the criteria of the analysis. It is termed fuzzy due to the fact that there is not a clear-cut distinction between data assigned to each class, and is in many cases considered a more accurate means of classifying real-world phenomena. Unlike cities, states, or countries, many natural distributions do not have distinct borders. Overlapping conditions and properties create unequal patterns.

An index model makes it possible to see the variance of different facts based on a scale and not based on absolutes. The boundary between a heavily vegetated area, for example, and a less vegetated area are an arbitrary or subjective boundary that varies from high to low density. Rather than a designation of each feature as part of a strictly-defined class, there are varying shades between the extremes. Based on a criteria, values of areas might be a range of values rather than true or false. An example would be models where desirable areas may be given a 5 while undesirable areas are given a 0 under several specific criteria on a scale. Between the two areas, one area might be given a 4.5 and another area might be given a 2, creating a range of values. Because each feature isn’t classified by only one value but rather an array of values, the borderline is said to be fuzzy.

Common applications of fuzzy suitability modeling are vegetation, habitats[1], and soil classification. There is not always a clear boundary between one vegetation type and the next in nature; it is a gradual change that varies depending on multiple factors. The pH value of soils will change as it becomes further from a polluted area. These gradual changes are more accurately represented through a fuzzy suitability model than a map with hard boundaries between classes. The fuzzy index model could also be used to find suitable groundwater. Under this usage geographers can show where suitable groundwater is located in areas where water is scarce. This can also be helpful in showing where groundwater is getting contaminated by pollutants in the earth.[2] Disaster relief and prevention are also used as fuzzy index models to predict at risk areas during severe weather and other possible hazardous events.

1. Select study area and cover types to be modeled.

2. Select an appropriate standard of comparison.

5. Modify the model if needed. 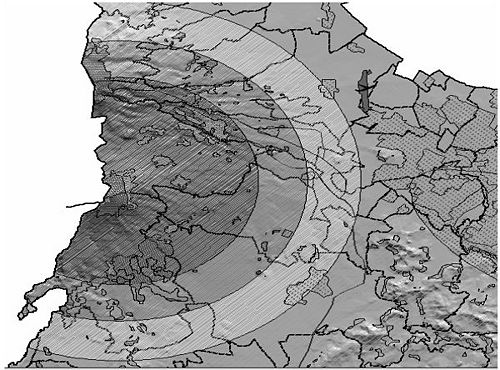 Example of a fuzzy index model depicting risk areas during a volcanic eruption in the city of Puebla, Mexico.[3]

Fuzzy models are covered in section GC9 in the 2006 GIS&T Body of Knowledge.