Example of inset map which shows a smaller portion of the map in greater detail. 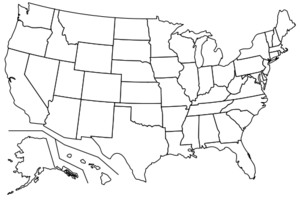 Example of inset map showing related information that would not easily fit in the same frame. (Alaska and Hawaii included on USA map)

An inset map is a smaller map featured on the same page as the main map. Traditionally, inset maps are shown at a larger scale (smaller area) than the main map [1]. Often, an inset map is used as a locator map that shows the area of the main map in a broader, more familiar geographical frame of reference. Inset maps may also be used to show the detail of a particular area of interest on a map.

Inset maps are used by cartographers to highlight information that would be difficult to perceive at the scale of the main map. This highlighted information may include symbols or points of interest that add to the purpose of the map and address its audience. This technique should be done for a highlighted area of significance, as the viewer will attach greater importance to the inset map.

An effective inset map follows the same design principles as any map, even though it is featured in a smaller frame. The inset should be placed away from the visual center of the map but in a balanced location where the viewer will be able to clearly see it and recognize that it is not an extension of the main map [2]. The most common way this distinction is made is through a border around the area of interest on the main map or through a text explanation on the insert map itself. A good inset should use similar colors and text as the main map to give them a feeling of unity. The scale should be clearly indicated on the inset map if it is not the same as the main map [3]. If the inset map is not North oriented, an indication such as a north arrow or graticule should be used. [4]

Inset maps are a great asset to Cartographic Design, but if overused, will create a choppy, cluttered appearance and the design will not appear unified [5].

There are several kinds of inset maps that each serve a very different purpose:

There could be many reasons to have an inset map, some of these reasons might include: