Interoperability is a property referring to the ability of diverse systems and organizations to work together (inter-operate). The term is often used in a technical systems engineering sense, or alternatively in a broad sense, taking into account social, political, and organizational factors that impact system to system performance.

The IEEE defines interoperability as:

the ability of two or more systems or components to exchange information and to use the information that has been exchanged.[1]

In telecommunication, the term can be defined as:

Source: from Federal Standard 1037C and from the Department of Defense Dictionary of Military and Associated Terms in support of MIL-STD-188.

In two-way radio, interoperability is composed of three dimensions: 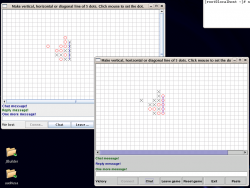 Interoperability: playing the two role network game, when one of the player clients (top left) runs under Sun Microsystems and another under GNU Classpath with JamVM. The applications execute the same bytecode and interoperate using the standard RMI-IIOP messages for communication

According to ISO/IEC 2382-01, Information Technology Vocabulary, Fundamental Terms, interoperability is defined as follows: "The capability to communicate, execute programs, or transfer data among various functional units in a manner that requires the user to have little or no knowledge of the unique characteristics of those units". [1]

Note that the definition is somewhat ambiguous because the user of a program can be another program and, if the latter is a portion of the set of program that is required to be interoperable, it might well be that it does need to have knowledge of the characteristics of other units. This definition focuses on the technical side of interoperability, while it has also been pointed out that interoperability is often more of an organizational issue: often interoperability has a significant impact on the organizations concerned, raising issues of ownership (do people want to share their data?), labor relations (are people prepared to undergo training?) and usability. In this context, a more apt definition is captured in the term "business process interoperability".

Interoperability can have important economic consequences, such as network externalities. If competitors' products are not interoperable (due to causes such as patents, trade secrets or coordination failures), the result may well be monopoly or market failure. For this reason, it may be prudent for user communities or governments to take steps to encourage interoperability in various situations. In the United Kingdom, for example, there is an eGovernment-based interoperability initiative called e-GIF. As far as user communities, Neutral Third Party is creating standards for business process interoperability. Another example of a neutral party is the RFC documents from the Internet Engineering Task Force (IETF).

New technologies are being introduced in hospitals and labs at an ever-increasing rate, and many of these innovations have the potential to interact synergistically if they can be integrated effectively. The need for “plug-and-play” interoperability – the ability to take a medical device out of its box and easily make it work with one’s other devices – has attracted great attention from both healthcare providers and industry.

Interoperability helps patients get the most out of technology, and it also encourages innovation in the industrial sphere. When different products can be combined without complicated and expensive interfaces, small companies can enter a field and make specialized products. Without interoperability, hospitals are forced to turn to large vendors that provide suites of compatible devices but that do not specialize in any one area. Interoperability promotes competition, and competition encourages innovation and quality.

From the perspective of Intel, a major producer of consumer healthcare devices, there are six major factors that affect an industry’s ability to achieve interoperability. First there needs to be a demand for interoperable products. Second, there must be standards, or rules, defining what interoperability means in the field. Third, business conditions must encourage manufacturers to make their products interoperable. Fourth, guidelines must exist that make the often-complicated standards easier for companies to interpret. Fifth, compliance must be verified by independent testing; and finally, interoperability must be actively promoted. The rapid rise of wireless technology illustrates that interoperability is attainable.

Conditions in the biomedical industry are still in the process of becoming conducive to the development of interoperable systems. A potential market of interested hospitals exists, and standards for interoperability are being developed. Nevertheless, it seems that current business conditions do not encourage manufacturers to pursue interoperability. Only sixteen to twenty percent of hospitals, for example, use electronic medical records (EMR). With such a low rate of EMR adoption, most manufacturers can get away with not investing in interoperability. In fact, not pursuing interoperability allows some of them to tout the inter-compatibility of their own products while excluding competitors. By promoting EMR adoption, companies such as Intel hope to create an environment in which hospitals will have the collective leverage to demand interoperable products.

Speaking from an eGovernment perspective, interoperability refers to the collaboration ability of cross-border services for citizens, businesses and public administrations. Exchanging data can be a challenge due to language barriers, different specifications of formats and varieties of categorisations. Many more hindrances can be identified.

If data is interpreted differently, collaboration is limited, takes longer and is not efficient. For instance if a citizen of country A wants to purchase land in country B, the person will be asked to submit the proper address data. Address data in both countries include: Full name details, street name and number as well as a post code. The order of the address details might vary. In the same language it is not an obstacle to order the provided address data; but across language barriers it becomes more and more difficult. If the language requires other characters it is almost impossible, if no translation tools are available.

Hence eGovernment applications need to exchange data in a semantically interoperable manner. This saves time and money and reduces sources of errors. Fields of practical use are found in every policy area, be it justice, trade or participation etc. Clear concepts of interpretation patterns are required.

Many organisations are dedicated to interoperability. All have in common that they want to push the development of the World Wide Web towards the semantic web. Some concentrate on eGovernment, eBusiness or data exchange in general. In Europe, for instance, the European Commission and its IDABC programme issue the European Interoperability Framework. They also initiated the Semantic Interoperability Centre Europe (SEMIC.EU). A European Land Information Service (EULIS) was established in 2006, as a consortium of European National Land Registers. The aim of the service is to establish a single portal through which customers are provided with access to information about individual properties, about land and property registration services, and about the associated legal environment[2]. In the United States, the government's CORE.gov service provides a collaboration environment for component development, sharing, registration, and reuse.

Interoperability is an important issue for law enforcement, fire fighting, EMS, and other public health and safety departments, because first responders need to be able to communicate during wide-scale emergencies. Traditionally, agencies could not exchange information because they operated widely disparate hardware that was incompatible. Agencies' information systems such as computer-aided dispatch systems (CAD) and records management systems (RMS) functioned largely in isolation, so-called "information islands." Agencies tried to bridge this isolation with inefficient, stop-gap methods while large agencies began implementing limited interoperable systems. These approaches were inadequate and the nation's lack of interoperability in the public safety realm become evident during the 9/11 attacks on the Pentagon and World Trade Center structures. Further evidence of a lack of interoperability surfaced when agencies tackled the aftermath of the Hurricane Katrina disaster.

In contrast to the overall national picture, some states, including Utah, have already made great strides forward. The Utah Highway Patrol and other departments in Utah have created a statewide data-sharing network using technology from a company based in Bountiful, Utah, FATPOT Technologies.

The Commonwealth of Virginia is one of the leading states in the United States when it comes to improving interoperability and is continually recognized as a National Best Practice by Department of Homeland Security (DHS). Virginia's proven practitioner-driven Governance Structure ensures that all the right players are involved in decision making, training & exercises, planning efforts, etc. The Interoperability Coordinator leverages a regional structure to better allocate grant funding around the Commonwealth so that all areas have an opportunity to improve communications interoperability. Virginia's strategic plan for communications is updated yearly to include new initiatives for the Commonwealth - all projects and efforts are tied to this plan, which is aligned with the National Emergency Communications Plan, authored by Department of Homeland Security's Office of Emergency Communications (OEC).

This important work saves the lives of emergency personnel and the citizens they serve.

The U.S. government is making a concerted effort to overcome the nation's lack of public safety interoperability. The Department of Homeland Security's Office for Interoperability and Compatibility (OIC) is pursuing the SAFECOM and CADIP programs, which are designed to help agencies as they integrate their CAD and other IT systems.

The OIC launched CADIP in August 2007. This project will partner the OIC with agencies in several locations, including Silicon Valley. This program will use case studies to identify the best practices and challenges associated with linking CAD systems across jurisdictional boundaries. These lessons will create the tools and resources public safety agencies can use to build interoperable CAD systems and communicate across local, state, and federal boundaries.

Each of these has an important role in reducing variability in intercommunication software and enhancing a common understanding of the end goal to be achieved.

Interoperability as a question of power and market dominance

Interoperability has also surfaced in the Software patent debate in the European Parliament (June/July 2005). Critics claim that because patents on techniques required for interoperability are kept under RAND (reasonable and non discriminatory licensing) conditions, customers will have to pay license fees twice: once for the product and, in the appropriate case, once for the patent protected programme the product uses.

Railways have greater or lesser interoperability depending on conforming to standards of gauge, couplings, brakes, signalling, communications, loading gauge, operating rules, to mention a few parameters. North American railroads are highly interoperable, Europe, Asia, Africa, Central and South America, and Australia much less so. The parameter most difficult to overcome (at reasonable cost) is incompatibility of gauge, though variable gauge axle systems such as the SUW 2000 are starting to come to the rescue.