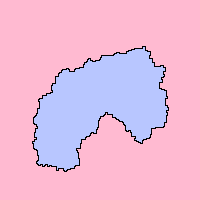 In topology, the Jordan curve theorem states that every non-self-intersecting loop in the plane (also known as a Jordan curve) divides the plane into an "inside" and an "outside" region, and any path connecting a point of one region to a point of the other intersects that loop somewhere.

The precise mathematical statement is as follows.

Let c be a simple closed curve (i.e. a Jordan curve) in the plane R2. Then the complement of the image of c consists of two distinct connected components. One of these components is bounded (the interior) and the other is unbounded (the exterior). The image of c is the boundary of each component.

The statement of the Jordan curve theorem seems obvious, but it was a very difficult theorem to prove. It was easy to establish the result for simple curves such as polygonal lines but the problem came in generalising it for all kind of curves which included nowhere differentiable curves such as the Koch snowflake. The theorem also holds for Jordan curves on the sphere, but not on the torus.

The first to formulate a version of the theorem, observing that it was not a self-evident statement but one requiring proof, was Bernard Bolzano. The first to present a proof was Camille Jordan in his book series Cours d'analyse de l'École Polytechnique (1882-7), after whom the theorem is named. Jordan's proof was however judged unsatisfactory by many mathematicians and it was Oswald Veblen who gave the first widely accepted proof in 1905. Several alternative proofs, some considerably simpler (but still relatively complex for such a seemingly simple statement) have been found since then.

A rigorous 6,500-line formal proof of the Jordan curve theorem was produced in 2005 by an international team of mathematicians using the Mizar system. This was actually the second formally verified proof of the Jordan curve theorem. The first formal proof was done by Thomas Callister Hales in the HOL Light system several months earlier, in January 2005. The HOL Light proof script has ca. 60,000 lines, however both the Mizar and the HOL Light proof rely on libraries of previously proved theorems, so these two sizes are not comparable. Hales' work is a part of a larger Flyspeck project aimed at formal verification of his proof of the Kepler conjecture.

Particularly useful special cases of the theorem are when the simple, closed curve is polygonal or smooth. These cases can be proven easily.

There is a generalisation of the Jordan curve theorem to higher dimensions.

Let X be a continuous, injective mapping of the sphere Sn into Rn+1. Then the complement of the image of X consists of two distinct connected components. One of these components is bounded (the interior) and the other is unbounded (the exterior). The image of X is their common boundary.

Another generalization of the Jordan curve theorem states that if M is any compact, connected boundaryless n-dimensional sub-manifold of Rn+1, then M separates Rn+1 into two regions: one compact, the other non-compact.