Kriging is a group of statistical techniques to interpolate the value of a random field (e.g., the elevation, z, of the landscape as a function of the geographic location) at an unobserved location from observations of its value at nearby locations.

The theory behind interpolation and extrapolation by kriging was developed by the French mathematician Georges Matheron based on the Master's thesis of Daniel Gerhardus Krige, the pioneering plotter of distance-weighted average gold grades at the Witwatersrand reef complex in South Africa. The English verb is to krige and the most common noun is kriging; both are often pronounced with a hard "g", following the pronunciation of the name "Krige". 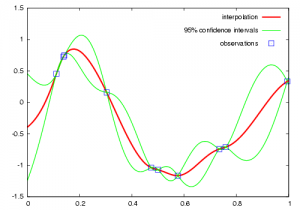 Kriging belongs to the family of linear least squares estimation algorithms. As illustrated in Figure 1, the aim of kriging is to estimate the value of an unknown real-valued function,

, given the values of the function at some other points,

. A kriging estimator is said to be linear because the predicted value

is a linear combination that may be written as

is a sample-path of a random process

, and that the error of prediction

is to be minimized in some sense. For instance, the so-called simple kriging assumption is that the mean and the covariance of

is known and then, the kriging predictor is the one that minimizes the variance of the prediction error.

From the geological point of view, the practice of kriging is based on assuming continued mineralization between measured values. Assuming prior knowledge encapsulates how minerals co-occur as a function of space. Then, given an ordered set of measured grades, interpolation by kriging predicts mineral concentrations at unobserved points.

The application of kriging to problems in geology and mining as well as to hydrology started in the mid-60s and especially in the 70s with the work of Georges Matheron. The connection between kriging and geostatistics remains prevalent today.

Kriging has been used in:

Kriging is a group of statistical techniques to interpolate the value

of a random field

of the landscape as a function of the geographic location

) at an unobserved location

of the random field at nearby locations

and the covariance function

of the random field.

The kriging estimator is given by a linear combination

of the observed values

chosen such that the variance (also called kriging variance or kriging error):

is minimized subject to the unbiasedness condition:

The kriging variance must not be confused with the variance

of the kriging predictor

The types of kriging

Depending on the stochastic properties of the random field different types of kriging apply. The type of kriging determines the linear constraint on the weights

implied by the unbiasedness condition; i.e. the linear constraint, and hence the method for calculating the weights, depends upon the type of kriging.

Classical types of kriging are

Simple kriging is mathematically the simplest, but the least general. It assumes the expectation of the random field to be known, and relies on a covariance function. However, in most applications neither the expectation nor the covariance are known beforehand.

The practical assumptions for the application of simple kriging are:

This is analogous to a linear regression of

The interpolation by simple kriging is given by:

The kriging error is given by:

which leads to the generalised least squares version of the Gauss-Markov theorem (Chiles & Delfiner 1999, p. 159):

Ordinary kriging is the most commonly used type of kriging. It assumes a constant but unknown mean.

The typical assumptions for the practical application of ordinary kriging are:

The mathematical condition for applicability of ordinary kriging are:

The kriging weights of ordinary kriging fulfill the unbiasedness condition

and are given by the ordinary kriging equation system:

to honor the unbiasedness condition.

The interpolation by ordinary kriging is given by:

The kriging error is given by:

Kriging is mathematically closely related to regression analysis. Both theories derive a best linear unbiased estimator, based on assumptions on covariances, make use of Gauss-Markov theorem to prove independence of the estimate and error, and make use of very similar formulae. They are nevertheless useful in different frameworks: Kriging is made for interpolation of a single realisation of a random field, while regression models are based on multiple observations of a multivariate dataset.

The kriging interpolation may also be seen as a spline in a reproducing kernel Hilbert space, with reproducing kernel given by the covariance function.[11] The difference with the classical kriging approach is provided by the interpretation: while the spline is motivated by a minimum norm interpolation based on a Hilbert space structure, kriging is motivated by an expected squared prediction error based on a stochastic model.

Kriging can also be understood as a form of Bayesian inference.[12] Kriging starts with a prior distribution over functions. This prior takes the form of a Gaussian process:

samples from a function will be normally distributed, where the covariance between any two samples is the covariance function (or kernel) of the Gaussian process evaluated at the spatial location of two points. A set of values is then observed, each value associated with a spatial location. Now, a new value can be predicted at any new spatial location, by combining the Gaussian prior with a Gaussian likelihood function for each of the observed values. The resulting posterior distribution is also Gaussian, with a mean and covariance that can be simply computed from the observed values, their variance, and the kernel matrix derived from the prior.

The theory of Kriging was developed by the French mathematician Georges Matheron based on the Master's thesis of Daniel Gerhardus Krige, the pioneering plotter of distance-weighted average gold grades at the Witwatersrand reef complex. The English verb is to krige and the most common adjective is kriging. The method was called krigeage for the first time in Matheron's 1960 Krigeage d’un Panneau Rectangulaire par sa Périphérie. Matheron, in this Note Géostatistique No 28, derives k*, his 'estimateur' and a precursor to the kriged estimate or kriged estimator. In classical statistics, Matheron’s k* is the length-weighted average grade of each of his panneaux in his set. What Matheron failed to derive was var(k*), the variance of his estimateur. On the contrary, he computed the length-weighted average grade of each panneau but did not compute the variance of its central value. In time, he replaced length-weighted average grades for three-dimensional sample spaces such as Matheronian blocks of ore with more abundant distance-weighted average grades for zero-dimensional sample spaces such as Matheronian points.

A central doctrine of geostatistics is that spatial dependence need not be verified but may be assumed to exist between two or more Matheronian points, determined in samples selected at positions with different coordinates. This doctrine of assumed causality is the quintessence of Matheron's new science of geostatistics. The question remains whether assumed causality makes sense in any other scientific discipline. The more so because central values such as distance- and length-weighted averages metamorphosed so smoothly into either kriged estimates or kriged estimators.

Matheron’s 1967 Kriging, or Polynomial Interpolation Procedures? A contribution to polemics in mathematical geology, praises the precise probabilistic background of kriging and finds least-squares polynomial interpolation wanting. In fact, Matheron preferred kriging because it gives infinite sets of kriged estimates or kriged estimators in finite three-dimensional sample spaces. Infinite sets of points on polynomials were rather restrictive for Matheron’s new science of geostatistics.