Ground and aerial surveys have been primary source of original elevation measurements for most DEMs. Traditional distance and angle measurements with surveying equipments may provide precise elevations at specified locations but these methods are slow and cover only small areas. Large area surveys typically can only afford a sparse network of points. Global positioning system (GPS) technologies have greatly improved survey speed and accuracy, but even those technologies are too slow to be the sole elevation data collection method over all but the smallest areas. Aerial photographs complement field surveying by increasing number and density of measured elevations.

Laser-based contour mapping and DEM generation are becoming more common these days. These systems, also known as LIDAR, are based on a downward-pointing laser placed on an aircraft. The laser measures height above terrain, and may include pointing optics that can measure the heights of locations both directly below and either side of the aircraft. A precise GPS system measures flying heights, and these flying heights may be combined with laser measurements to produce a set of terrain heights from across the landscape. Height measurements may be combined to create a grid-based DEM.

A common method of representing the shape of the terrain, for use in various simulations or digital computer assisted studies, is to record the height of the terrain at regular intervals over a 2-dimensional grid and store this information in the computer. Once we have the matrix will all of the elevation values, we can then make the contour map. By threading contour lines through the matrix, we can also make shaded maps, arrow maps (that show slope) and 3-D maps, all based on the same grid.

How does it work?

A LIDAR Contour Mapping System comprises a laser source that projects a laser beam onto a spinning or scanning mirror that sends a brief pulse of light onto the earth’s surface. The mirror rotates or scans at an extremely fast rate, enabling the LIDAR system to project thousands of laser pulses per second, thus creating a dense swath of laser points on the ground. The reflected laser pulse is detected by the system which then, based on the time of travel and the aircraft position and attitude, computes the x, y and z position of each reflection point, i.e. the ground or other intermediate object.

Modern laser scanning systems are capable of emitting up to 100,000 pulses per second, providing a dense grid of points covering the ground surface and capable of penetrating vegetation. It is then possible to model not only the ground surface below trees but also the tops of trees and buildings.

A LIDAR Contour Mapping System comprises a laser source that projects a laser beam onto a spinning or scanning mirror that sends a brief pulse of light onto the earth’s surface. 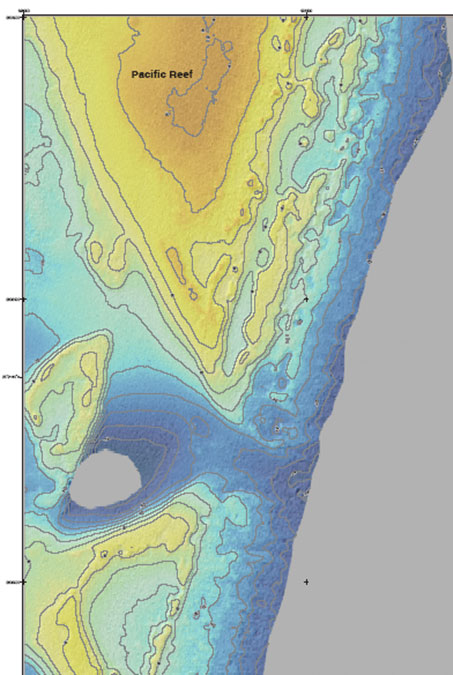 What are the benefits?

Accuracy: Airborne laser contour mapping uses a combination of three mature technologies; rugged compact laser rangefinders (LIDAR), highly accurate inertial reference systems (INS) and the global positioning satellite system (GPS). By integrating these subsystems in to a single instrument mounted in a small airplane or helicopter, it is possible to produce accurate digital topographic maps of the terrain beneath the flight path of the aircraft.The absolute accuracy of the elevation data is 15 cm; relative accuracy can be less than 5 cm. Absolute accuracy of the XY data is dependent on operating parameters such as flight altitude but is usually 10's of cm to 1 m.

Speed: The technology allows for extremely rapid rates of topographic data collection. With current commercial systems it is possible to survey one thousand square kilometers in less than 12 hours and have the geo-referenced DTM data available within 24 hours of the flight.The elevation data is generated at 1000s of points per second, resulting in elevation point densities far greater than traditional ground survey methods. One hour of data collection can result in over 10,000,000 individually geo-referenced elevation points. With these high sampling rates, it is possible to rapidly complete a large topographic survey and still generate DTMs with a grid spacing of 1 m or less.

Non-intrusive: Airborne laser mapping instruments are active sensor systems, as opposed to passive imagery such as cameras. Consequently, they offer advantages and unique capabilities when compared to traditional photogrammetry. For example, airborne laser mapping systems can penetrate forest canopy to map the floor beneath the treetops, accurately map the sag of electrical power lines between transmission towers or provide accurate elevation data in areas of low relief and contrast such as beaches.

Airborne laser mapping is a non-intrusive method of obtaining detailed and accurate elevation information. It can be used in situations where ground access is limited, prohibited or risky to field crews.

Commercial airborne laser mapping systems are now available from several instrument manufacturers while various survey companies have designed and built custom systems. Similar to aerial cameras, the instruments can be installed in small single or twin-engine planes or helicopters. Since the instruments are less sensitive to environmental conditions such as weather, sun angle or seasonal foliage, the envelope for survey operations is increased. In addition, airborne laser mapping can be conducted at night with no degradation performance.

Absolute accuracy has not been achieved on aerial lidar contour mapping; that is possible only with ground-fixed lasers. Once we place a laser system onto a moving platform, the position of the platform becomes the limiting factor. The technology does not provide a real-time solution; it requires additional post-processing after the field operations and data collection are completed to generate the final XYZ data points. Post-processing is based on proprietary software developed by each instrument manufacturer. Airborne LIDAR contour mapping systems are technically extremely complex bits of equipment. In fact, they are actually three very complex bits of equipment that everyone hopes will work together.

Not All LIDAR Contour Mapping Systems Are The Same:
There are a number of different LIDAR contour mapping systems made by different manufacturers. Each system has its own unique characteristics. As a rule of thumb, systems made to work over water do not work as well over land, and vice versa. The reason is, to penetrate water; a specific wavelength of laser is used (usually at the green end of the spectrum). To obtain good reflections over land, LIDAR are produced with wavelengths in the infrared/near infrared frequencies. If a LIDAR is made to cover large areas at high-level flying heights, unless the characteristics are changed, it will be too powerful to use on low-level flights. It might just burn out the sensor or be a hazard to things below. (Eye-safe use is a significant concern with some LIDAR systems.) Conversely, a system manufactured to operate at low flying heights will not have the power to work at greater heights. Each type of LIDAR has its special applications and use.

Forestry: The technology is also extensively used in forestry and natural resource management. Unlike other technologies, it can not only accurately map the ground underneath the trees but also measure the tree heights.

Coastal engineering: These days, Lidar is being extensively used for collecting topographic data. For instance, this technology is being used by the National Oceanic and Atmospheric Administration (NOAA) and NASA scientists to document topographic changes along shorelines. These data are collected with aircraft-mounted lasers capable of recording elevation measurements at a rate of 2,000 to 5,000 pulses per second and have a vertical precision of 15 centimeters (6 inches). After a baseline data set has been created, follow-up flights can be used to detect shoreline changes. 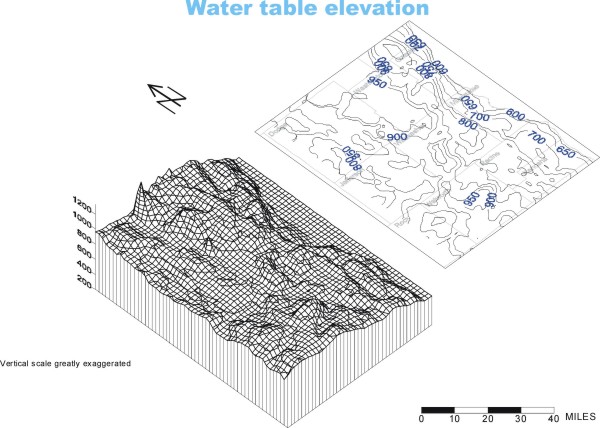 The following are some of the manufacturers of this technology around the world:

• Aero-metric Inc. - A nationally recognized Geo Spatial Solutions firm with a strong Lidar history with offices across the U.S. headquartered in Sheboygan, Wisconsin
• Bolstad,Paul,GIS Fundamentals: A First Text on Geographic Information Systems,ISBN 0-9717647-1-9
• Laser Map Image Plus – One of the North America’s leading providers of airborne lidar services and digital imagery.
• The International LIDAR Mapping Forum - The ILMF is the premier event for the LIDAR industry attracting professionals from all over the world. Its annual summits are the focal gathering of industry leaders, pioneers, experts from government, academia and professionals from industries looking to invest in and benefit from LIDAR technology and services.
• Airborne Laser Mapping - A reference source on the emerging technology of airborne mapping.
• 3D Laser Mapping - Based in Nottinghamshire, 3D Laser Mapping are a provider of LIDAR software and hardware, and provide pre and post sales support for both Riegl LMS and third-party products.
• Observation Magazine - A magazine for geographic, mapping, Earth information is the leading journal integrating all of the Geotechnologies.
• Airborne 1 - Airborne 1 is the leading provider of LIDAR services to U.S. photogrammetry, surveying, and mapping firms.
• AAMHatch - AAMHatch is a company established in 1959 that provides aerial surveying and mapping services throughout Australia, South East Asia and the Pacific.
• Lidar Technologies – A collection of frequently asked questions about LIDAR technology.
• Earth Data – A leading organization for remote sensing, mapping and GIS services.
• TopoSys GmbH - A German cutting-edge company operating in the field of Airborne Laser Scanning and Aerial Surveys.
• Terrain Tools 3D - 3D LIDAR modelling software.
• Leica Geosystems - A leading airborne LIDAR vendor.