The Lambert azimuthal equal-area projection is a map projection used in cartography. It accurately represents area in all regions of the sphere, but it does not accurately represent angles. It is named for the Alsatian mathematician Johann Heinrich Lambert, who discovered it in 1772.[1] The Lambert azimuthal equal-area projection is used for navigation, thematic and USGS maps.

Azimuthal equal-area projections are able to present the whole Earth in a single map and with constant radial scale (distances increase linearly from the center of projection). Like the superficially similar azimuthal equidistant, the Lambert azimuthal projection strongly distorts shapes in the boundary of a worldwide map. However, the radial scale is not constant: in the polar aspect, parallels (circles of latitude) get closer together towards the border, just enough to preserve areas.[2]

With the azimuthal (or planar) projection, a portion of the Earth's surface is transformed from a perspective point (or zenith point) to a flat surface. In the polar case, the parallels are represented by a system of concentric circles sharing a common point of origin from which radiate the meridians, spaced at true angles. This projection shows true direction only between the center point and other locations on the map.[3] 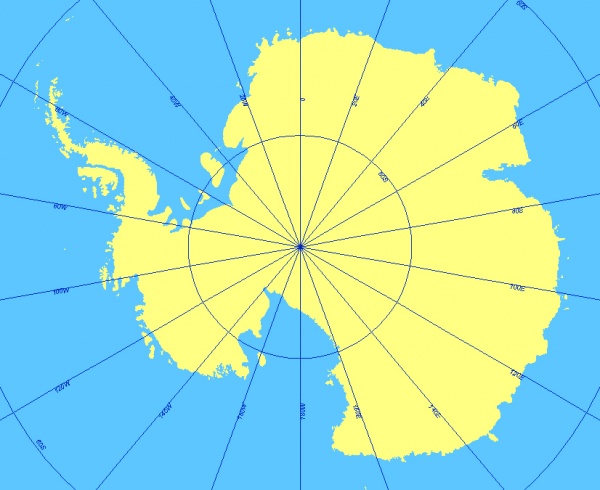 The oblique case of this projection is often used for continents. The construction of a network centered on parallel 40 (40th parallel north) is tabulated in the U.S. Coast and Geodetic Survey, Special Publication No. 68 (1934). The parallels appear as arcs which are flat in the center and curve sharply towards the sides, and the meridians are nearly elliptical. The scale error of this projection is very small; nowhere on the map of the [contiguous] United States does it exceed 2 percent.[4]

Lambert azimuthal equal-area maps are best used for thematic and presentation maps that represent regions of the earth such as continents, seas or countries. When the perspective point is centered on a region (as in an oblique aspect), areas represented on the map have the same area as the corresponding feature on the Earth's surface.