The Lambert conformal conic projection is a map projection in which all meridians are represented by straight lines radiating from a common point outside the mapped area (for example, a point on the polar axis) and the parallels are represented by arcs or circles whose center is this same common point: this projection may have one or two standard parallels that maintain exact scale, while the scale varies along the meridians, and, since the meridians and parallels intersect at right angles, angles between locations on the surface of the earth are correctly shown.[1] This projection is one of the best for middle latitudes; consequently it common to use this projection when mapping the continental United States. It is similar to the Albers equal-area conic projection except that Lambert Conformal Conic portrays shape more accurately than area. This is the only common conic projection that represents the poles as a single point. This projection has minimal distortion and correct scale near the standard parallels, and is used for many USGS maps.[2] 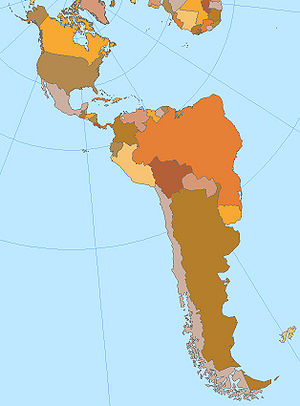 Canada Lambert Conformal Conic projection of North and South America demonstrates the increasing area and shape distortion with increased distance from the standard parallel.
The conic geometric shape can either be tangent or secant to the spheroid. In the tangent case the cone just touches the Earth along a single line or at a point. In the secant case, the cone, or cylinder intersects or cuts through the Earth as two circles. (The secant case for the plane intersects as one circle.) Whether tangent or secant, the location of this contact is important because it defines the line or point of least distortion on the map projection. This line of true scale is called the standard parallel or standard line. Secant conformal conics are commonly used to map the continental United States as a result of the increased accuracy present due to the secant line(see picture above). While distortion still exists, it is lessened using secant conic projections such as Lambert's. [3]

As in all conformal projections, scale distortion is greatly exaggerated on the borders of a worldwide map, although less than in Mercator's. Meridians converge at the pole nearest the standard parallels; the opposite pole lies at infinity and cannot be shown. Scale distortion is constant along each parallel. Meridian scale is less than true between the standard parallels, and greater "outside" them.[4]