'Land use' is also often used to refer to the distinct land use types in Zoning.

Land use is the human modification of natural environment or wilderness into built environment such as fields, pastures, and settlements. The major effect of land use on land cover since 1750 has been deforestation of temperate regions.[1] More recent significant effects of land use include urban sprawl, soil erosion, soil degradation, salinization, and desertification.[2] Land-use change, together with use of fossil fuels, are the major anthropogenic sources of carbon dioxide, a dominant greenhouse gas.[3] It has also been defined as "the total of arrangements, activities, and inputs that people undertake in a certain land cover type" (FAO, 1997a; FAO/UNEP, 1999). [4] 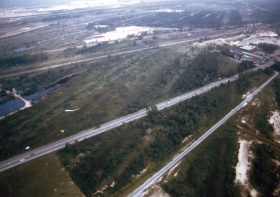 Each designation, known as a parcel’s zoning, comes with a list of approved uses that can legally operate on the zoned parcel. These are found in a government’s ordinances or zoning regulations.

Land use and the environment

Land use and land management practices have a major impact on natural resources including water, soil, nutrients, plants and animals. Land use information can be used to develop solutions for natural resource management issues such as salinity and water quality. For instance, water bodies in a region that has been deforested or having erosion will have different water quality than those in areas that are forested.

Multiple examples of suburban land use.

According to a report by the United Nations' Food and Agriculture Organisation, land degradation has been exacerbated where there has been an absence of any land use planning, or of its orderly execution, or the existence of financial or legal incentives that have led to the wrong land use decisions, or one-sided central planning leading to over-utilization of the land resources - for instance for immediate production at all costs. As a consequence the result has often been misery for large segments of the local population and destruction of valuable ecosystems. Such narrow approaches should be replaced by a technique for the planning and management of land resources that is integrated and holistic and where land users are central. This will ensure the long-term quality of the land for human use, the prevention or resolution of social conflicts related to land use, and the conservation of ecosystems of high biodiversity value.