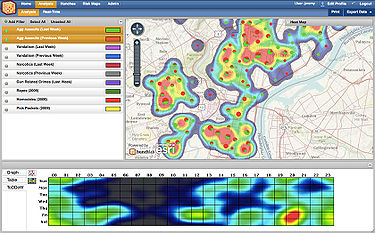 Geographic information systems (GIS) are useful in all areas of law enforcement, from crime prevention to corrections. Many layers of data can be geospatially visualized to allow law enforcement to gather more as well as more complete information than they would normally be able to using traditional maps, charts, and spreadsheets.

Crime mapping is the basis for nearly all police work. Traditionally, stations have large maps of the city and use pins to mark locations of crimes. GIS can take this necessary task and make it simpler as well as more useful. Starting with a base map of the city layout, officers can input crimes as they occur, making information instantly available to all users of the system. It is also possible to visualize multiple crimes that might have occurred at the same address which is not possible with old pushpin and wall map systems. Older records can also be visible in the system so that connections can be made that might be lost when comparing currents crime trends to reports of old crimes. Another important element of crime mapping is the ability to include other community characteristics on the map. These records can include things like slum areas, liquor stores, parks, markets, and any other facet of the city. Being able to see these elements is useful when using the maps for crime analysis. [1]

Crime analysis is the process of looking for trends in criminal data. By using GIS, officers can take crime maps and process information from them quickly and effectively. Hot spots are clusters of criminal activity and are one of the most important ways that data can be analyzed. Once discovered, these hot spots can be compared over periods of time to check for reduction in criminal activity. It is also easy to see if there are any interactions between the types of crimes that occur in a particular surrounding. Radial analysis is similar to hot spot analysis but it is not based around a specific crime, or series of crimes. Instead, it is based upon looking at what kinds of crimes occur around a specific location. Any single aspect can be chosen (bar, slum, intersection, etc.) or a particular type of business can be chosen (all schools, all bars, etc.). [1]

Crime investigation is similar to crime analysis in the way that it is used to look for patterns in crime data. However, it is more focused on figuring out the origin of criminal activity and how it can be prevented. By being able to map out serial offences, patterns can begin to emerge as to the lifestyle and frequented spots of the criminal in question. This is useful in predicting where future incidences are likely to happen and hopefully will allow officers to stop a criminal before they strike again.[1] GIS also allows police to analyze the time of day, week, month, or year that specific crimes happen so that extra resources can be allocated to these areas when they are most needed.[2]

Gangs are a problem that many cities have to deal with on a daily basis so law enforcement is always looking for new and inventive ways to reduce the toll they take on their city and the citizens in it. Gangs often "mark" their territory by tagging symbols on various parts of the city in which they reside. Certain symbols stand for different things within the gang. They can mean that a particular area is a part of their territory or they can be sending messages to rival gangs. By using GIS, field officers can capture a photo of graffiti and tie it to the location where it is found. Once multiple messages have been captured and mapped, a picture begins to emerge as to where gang territories begin and end. Areas where multiple gangs' graffiti interact can be marked as a "hot spot" of rival gang interaction and can be closely monitored. [3]

Monitoring high risk individuals on probation can be a difficult task for most law enforcement agencies. GIS and GPS coupled with ankle monitors can make this task much more manageable. Ankle monitors send off a signal which logs the parolee’s location every minute, and this report is sent to officers every ten minutes. GIS help in automating this very time consuming and manually intensive process. Alerts can be set to notify officers if a person goes to area which they are not supposed to be so they can be almost immediately apprehended and a possible crime can be avoided. If there is a crime committed in a specific area, the location of a parolee can be easily compared and affords officers a logical basis to question individuals, if necessary. [4]