Linear interpolation is a method of curve fitting using linear polynomials. It is heavily employed in mathematics (particularly numerical analysis), and numerous applications including computer graphics. It is a simple form of interpolation.

Lerp is a quasi-acronym for linear interpolation, which can also be used as a verb (Raymond 2003). 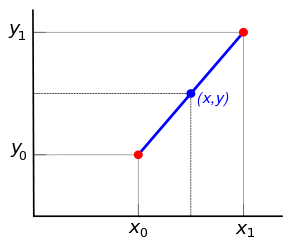 If the two known points are given by the coordinates

, the linear interpolant is the straight line between these points. For a value x in the interval

, the value y along the straight line is given from the equation

which can be derived geometrically from the figure on the right.

Solving this equation for y, which is the unknown value at x, gives

which is the formula for linear interpolation in the interval

. Outside this interval, the formula is identical to linear extrapolation.

Interpolation of a data set

Linear interpolation on a set of data points

is defined as the concatenation of linear interpolants between each pair of data points. This results in a continuous curve, with a discontinuous derivative, thus of differentiability class

Linear interpolation is often used to approximate a value of some function f using two known values of that function at other points. The error of this approximation is defined as

where p denotes the linear interpolation polynomial defined above

It can be proven using Rolle's theorem that if f has a continuous second derivative, the error is bounded by

The basic operation of linear interpolation between two values is so commonly used in computer graphics that it is sometimes called a lerp in that field's jargon. The term can be used as a verb or noun for the operation. e.g. "Bresenham's algorithm lerps incrementally between the two endpoints of the line."

Lerp operations are built into the hardware of all modern computer graphics processors. They are often used as building blocks for more complex operations: for example, a bilinear interpolation can be accomplished in two lerps. Because this operation is cheap, it's also a good way to implement accurate lookup tables with quick lookup for smooth functions without having too many table entries.

If a C0 function is insufficient, for example if the process that has produced the data points is known be smoother than C0, it is common to replace linear interpolation with spline interpolation, or even polynomial interpolation in some cases.

Linear interpolation has been used since antiquity for filling the gaps in tables, often with astronomical data. It is believed that it was used by Babylonian astronomers and mathematicians in Seleucid Mesopotamia (last three centuries BC), and by the Greek astronomer and mathematician, Hipparchus (second century BC). A description of linear interpolation can be found in the Almagest (second century AD) by Ptolemy.