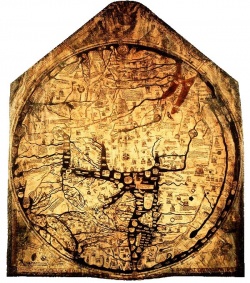 Mappa mundi (Latin [ˈmap˝a ˈmʊndi˝]; plural = mappae mundi) is a general term used to describe Medieval European maps of the world. These maps ranged in size and complexity from simple schematic maps an inch or less across, to elaborate wall maps, the largest of which was 11 ft. (3.5 m.) in diameter. The term derives from the Medieval Latin words mappa (cloth or chart) and mundi (of the world).

Approximately 1,100 mappae mundi are known to have survived from the Middle Ages. Of these, some 900 are found illustrating manuscripts and the remainder exist as stand-alone documents.[1]

Zonal maps are pictures of the East Hemisphere. Their purpose was to illustrate the concept that the world is a sphere with 5 climate zones: (i) The northern frigid zone, (ii) the northern temperate zone, (iii) the equatorial tropical zone, (iv) the southern temperate zone, and (v) the southern frigid zone. Of these, only the two temperate zones were believed to be inhabitable, and the known world was contained entirely within the northern temperate zone's Eastern Hemisphere. Because most surviving Zonal maps are found illustrating Macrobius' Commentary on Cicero's Dream of Scipio (an excerpt of Cicero's De Re Publica), this type of map is sometimes called "Macrobian". In their simplest and most common form, Zonal mappae mundi are merely circles divided into five parallel zones, but several larger Zonal maps with much more detail have survived.

T-O maps (unlike Zonal maps) illustrate only the habitable portion of the world known in Roman and Medieval times. The landmass was illustrated as a circle (an "O") divided into three portions by a "T". These three divisions were the continents of Asia, Africa and Europe. The vast majority of T-O maps place east at the top, hence the term "orienting" a map from the Latin word oriens for "east". The assertion that T-O maps depict a "flat earth", while common, is unwarranted. The "circle of the lands" in a T-O can just as easily be fit onto the sphere of the Earth as onto a flat, disk-shaped Earth[original research?]. The popularity of the Macrobian maps and the combination of T-O style continents on some of the larger Macrobian spheres illustrate that Earth's sphericity continued to be understood among scholars during the Middle Ages.

Quadripartite maps represent a sort of amalgam of the Zonal and T-O maps by illustrating the three known continents separated by an equatorial ocean from a fourth unknown land, often called Antipodes. Fourteen large quadripartite maps are found illustrating different manuscripts of Beatus of Liébana's popular Commentary on the Apocalypse of St. John. These "Beatus maps" are believed to derive from a single (now lost) original which was used to illustrate the missions of the twelve apostles of Jesus Christ.[2]

The Complex or "great" world maps are the most famous mappae mundi. Although most employ a modified T-O scheme, they are considerably more detailed than their smaller T-O cousins. These maps show coastal details, mountains, rivers, cities, towns and provinces. Some include figures and stories from history, the Bible and classical mythology. Also shown on some maps are exotic plants, beasts and races known to Medieval scholars only through Roman and Greek texts. Prior to its destruction in World War II, the Ebstorf map at 11 ft. (3.5 m; image) across was the largest surviving mappa mundi. Today that honor is held by the famous Hereford map which is 1.5 m. across.[citation needed] Other important maps in this group are the Cotton or Anglo-Saxon map, the Psalter map and the Henry of Mainz map. The somewhat later mappae mundi that accompany the popular Polychronicon of Ranulf Higden should probably be viewed as degenerate form of the earlier complex maps.

To modern eyes, mappae mundi can look superficially primitive and inaccurate. However, mappae mundi were never meant to be used as navigational charts and they make no pretense of showing land and water proportionately. Rather, mappae mundi were schematic and were meant to illustrate different principles. The simplest mappae mundi were diagrams meant to preserve and illustrate classical learning easily. The Zonal maps should be viewed as a kind of teaching aid — easily reproduced and designed to reinforce the idea of the Earth's sphericity and climate zones. T-O maps were designed to schematically illustrate the three land masses of the world as it was known to the Romans and their Medieval European heirs.[citation needed]

The larger mappae mundi have the space and detail to illustrate further concepts, such as the cardinal directions, distant lands, Bible stories, history, mythology, flora, fauna and exotic races. In their fullest form, such as the Ebstorf and Hereford maps, they become minor encyclopedias of Medieval knowledge.

In her study, Brigitte Englisch shows that the medieval world maps (the mappae mundi) both from their concept and in their concrete practice are founded on a systematically geometric projection of the known world. The basis of this projection, however, is not geographical surveying but the harmonious order of God’s creation.[citation needed] Using regular geometric forms like circles and triangles which are also regarded as religiously perfect, they created a coherent planispheric system. This quite basically presents the known world in its real geographic appearance which is visible in the so called Vatican Map of Isidor (776), the world maps of Beatus of Liebana’s Commentary on the Apocalypse of St. John (8th century), the Anglo-Saxon Map (ca. 1000), the Sawley map, the Psalter map, or the large mappaemundi of the 13th century (Hereford/Ebstorf).

End of the tradition

In the central Middle Ages a new type of map developed as an aid to navigating the Mediterranean Sea. Known as "Portolan charts", these maps are characterized by extremely accurate coastlines with criss-crossing rhumb lines. A particularly famous example is the Catalan Atlas of Abraham Cresques. During the late Middle Ages and with the coming of the Renaissance, western Europeans became reacquainted with the work of many ancient Greek scholars. In the field of geography and map-making, the coordinate system which Claudius Ptolemy outlined in the Geographia became extremely influential. Over time maps influenced by these new ideas displaced the older traditions of mappae mundi. The last examples of the tradition, including the massive map of Fra Mauro, may be seen as hybrids, incorporating Portolan-style coastlines into the frame of a traditional mappamundi.