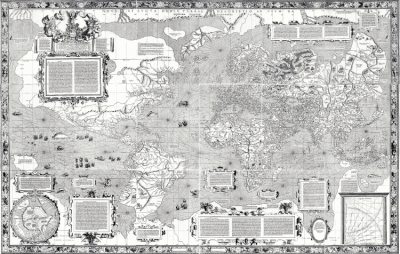 The Mercator projection is a cylindrical map projection presented by the Flemish geographer and cartographer Gerardus Mercator, in 1569. It became the standard map projection for nautical purposes because of its ability to represent lines of constant course, known as rhumb lines or loxodromes, as straight segments. While the linear scale is constant in all directions around any point, thus preserving the angles and the shapes of small objects (which makes the projection conformal), the Mercator projection distorts the size and shape of large objects, as the scale increases from the Equator to the poles, where it becomes infinite.

Mercator's 1569 edition was a large planisphere measuring 202 by 124 cm, printed in eighteen separate sheets. As in all cylindrical projections, parallels and meridians are straight and perpendicular to each other. In accomplishing this, the unavoidable east-west stretching of the map, which increases as distance away from the equator increases, is accompanied by a corresponding north-south stretching, so that at every point location, the east-west scale is the same as the north-south scale, making the projection conformal. A Mercator map can never fully show the polar areas, since linear scale becomes infinitely high at the poles. Being a conformal projection, angles are preserved around all locations. However scale varies from place to place, distorting the size of geographical objects and transmitting a wrong idea of the overall geometry of our planet. At latitudes higher than 70° north or south, the Mercator projection is practically unusable.

All lines of constant bearing (rhumb lines or loxodromes — those making constant angles with the meridians), are represented by straight segments on a Mercator map. This is precisely the type of route usually employed by ships at sea, where compasses are used to indicate geographical directions and to steer the ships. The two properties, conformality and straight rhumb lines, make this projection uniquely suited to marine navigation: courses and bearings are measured using wind roses or protractors, and the corresponding directions are easily transferred from point to point, on the map, with the help of a parallel ruler or a pair of navigational squares.

The name and explanations given by Mercator to his world map (Nova et Aucta Orbis Terrae Descriptio ad Usum Navigatium Emendate: "new and augmented description of Earth corrected for the use of navigation") show that it was expressly conceived for the use of marine navigation. Although the method of construction is not explained by the author, Mercator probably used a graphical method, transferring some rhumb lines previously plotted on a globe to a square graticule, and then adjusting the spacing between parallels so that those lines became straight, making the same angle with the meridians as in the globe.

The development of the Mercator projection represented a major breakthrough in the nautical cartography of the 16th century. However, it was much ahead of its time, since the old navigational and surveying techniques were not compatible with its use in navigation. Two main problems prevented its immediate application: the impossibility of determining the longitude at sea with adequate accuracy and the fact that magnetic directions, instead of geographical directions, were used in navigation. Only in the middle of the 18th century, after the marine chronometer was invented and the spatial distribution of magnetic declination was known, could the Mercator projection be fully adopted by navigators.

Several authors are associated with the development of Mercator projection:

Mathematics of the projection

The following equations determine the x and y coordinates of points on a Mercator map from its latitude φs and longitude λs (with λ0 being the longitude in the center of map): 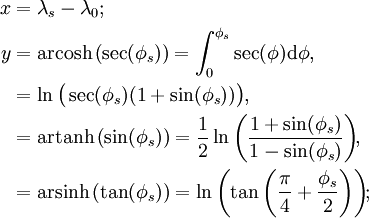 This is the inverse of the Gudermannian function: 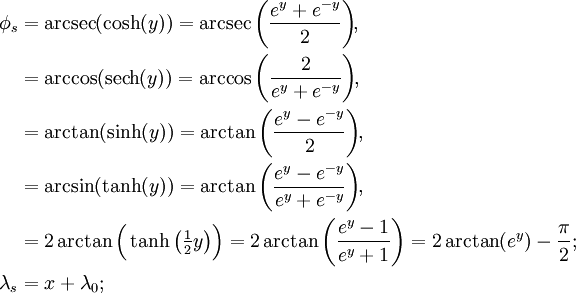 The scale is proportional to the secant of the latitude φs, getting arbitrarily large near the poles, where φs = ±90°. Moreover, as seen from the formulas, the pole's y is plus or minus infinity.

Derivation of the projection

The Mercator projection is a cylindrical projection.

Assume a spherical Earth. (It is actually slightly flattened, but for small-scale maps the difference is immaterial. For more precision, interpose conformal latitude.) We seek a transform of longitude-latitude (λ, φ) to Cartesian (x, y) that is "a cylinder tangent to the equator" (i.e. x = λ) and conformal, so that:

Thus y is a function only of φ with

from which a table of integrals gives 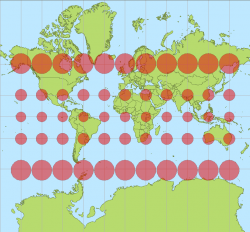 The above reprojected as sinusoidal

Like all map projections that attempt to fit a curved surface onto a flat sheet, the shape of the map is a distortion of the true layout of the Earth's surface. The Mercator projection exaggerates the size of areas far from the equator. For example:

Arno Peters stirred controversy when he proposed what is known as the Gall-Peters projection, a slight modification of the Lambert Cylindrical Equal-Area projection, as the alternative to the Mercator. A 1989 resolution by seven North American geographical groups decried the use of all rectangular-coordinate world maps, including the Mercator and Gall-Peters.[1]

Google Maps currently uses a Mercator projection for its map images. Despite its obvious scale distortions at small scales, the projection is well-suited as an interactive world map that can be zoomed seamlessly to large-scale (local) maps, where there is relatively little distortion due to the projection's conformal nature. (Google Satellite Maps, on the other hand, used a plate carrée projection until July 22, 2005.)

The Google Maps tiling system displays most of the world at zoom level 0 as a single 256 pixel-square image, excluding the polar regions. Since the Mercator coordinate x varies over 2π, the other coordinate is limited to -π ≤ y ≤ π. Because

the corresponding latitude extrema are φ = ±85.05113°. Latitude values outside this range are mapped using a different relationship that doesn't diverge at φ = ±90°.