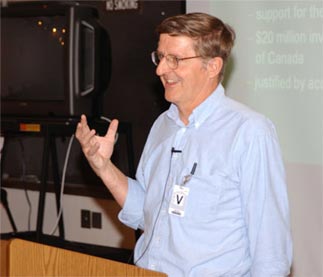 Michael Frank Goodchild (born February 24,1944) is a British-American geographer. He is currently a professor of geography at the University of California, Santa Barbara. After nineteen years at the University of Western Ontario, including three years as chair, he moved to Santa Barbara in 1988, as part of the establishment of the National Center for Geographic Information and Analysis, which he has directed for nearly 20 years. Goodchild became a member of the National Academy of Sciences in 2002, and received the Royal Geographical Society's Founder's Medal in 2003.

His most influential work has involved research on Geographic Information Science (aka GIS or computer mapping).