A nautical chart is a graphic representation of a maritime area and adjacent coastal regions. Depending on the scale of the chart, it may show depths of water and heights of land (topographic map), natural features of the seabed, details of the coastline, navigational hazards, locations of natural and man-made aids to navigation, information on tides and currents, local details of the Earth's magnetic field, and man-made structures such as harbours, buildings, and bridges. Nautical charts are essential tools for marine navigation; many countries require vessels, especially commercial ships, to carry them. Nautical charting may take the form of charts printed on paper or computerised electronic navigational charts. 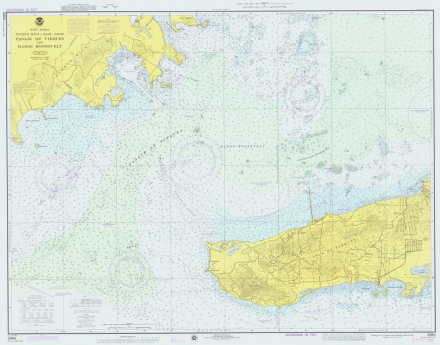 A 1976 United States NOAA chart of part of Puerto Rico

Sources and publication of nautical charts

Nautical charts are based on hydrographic surveys. As surveying is laborious and time-consuming, hydrographic data for many areas of sea may be dated and not always reliable. Depths are measured in a variety of ways. Historically the sounding line was used. In modern times, echo sounding is used for measuring the seabed in the open sea. When measuring the safe depth of water over an entire obstruction, such as a shipwreck, the minimum depth is checked by sweeping the area with a length of horizontal wire. This ensures that difficult to find projections, such as masts, do not present a danger to vessels navigating over the obstruction.

There are also commercially published charts, some of which may carry additional information of particular interest, e.g. for yacht skippers.

The US National Oceanic and Atmospheric Administration is now offering complete detailed nautical charts for free download for home printing for the entire US coast. The charts are continuously updated. This should improve the safety at sea, while reducing costs for mariners.

The nature of a waterway depicted by a chart may change, and artificial aids to navigation may be altered at short notice. Therefore, old or uncorrected charts should never be used for navigation. Every producer of nautical charts also provides a system to inform mariners of changes that affect the chart. In the United States, chart corrections and notifications of new editions are provided by various governmental agencies by way of Notice to Mariners, Local Notice to Mariners, Summary of Corrections, and Broadcast Notice to Mariners. Radio broadcasts give advance notice of urgent corrections.

A convenient way to keep track of corrections is with a Chart and Publication Correction Record Card system. Using this system, the navigator does not immediately update every chart in the portfolio when a new Notice to Mariners arrives, instead creating a card for every chart and noting the correction on this card. When the time comes to use the chart, he pulls the chart and chart's card, and makes the indicated corrections on the chart. This system ensures that every chart is properly corrected prior to use.

Various and diverse methods exist for the correction of electronic navigational charts.

-
A pre-Mercator nautical chart of 1571, from Portuguese cartographer Fernão Vaz Dourado (c. 1520-c.1580). It belongs to the so-called plane chart model, where observed latitudes and magnetic directions are plotted directly into the plane, with a constant scale, as if the Earth's surface were a flat plane (Portuguese National Archives of Torre do Tombo, Lisbon)

Positions of places shown on the chart can be measured from the longitude and latitude scales on the borders of the chart, relative to a map datum such as WGS 84.

A bearing is the angle between the line joining the two points of interest and the line from one of the points to the north, such as a ship’s course or a compass reading to a landmark. On nautical charts, the top of the chart is always true north, rather than magnetic north, towards which a magnetic compass points. Most charts include a compass rose depicting the variation between magnetic and true north. 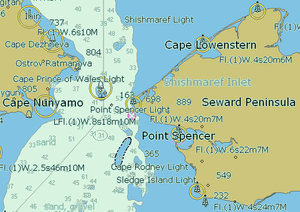 Portion of an electronic chart of the Bering Strait

Conventional nautical charts are printed on large sheets of paper at a variety of scales. Mariners will generally carry many charts to provide sufficient detail for the areas they might need to visit. Electronic navigational charts, which use computer software and electronic databases to provide navigation information, can augment or in some cases replace paper charts, though most mariners carry paper charts as a back up in case the electronic charting system fails. 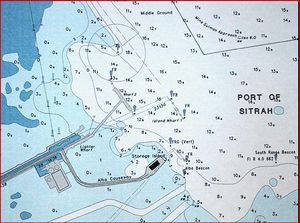 Nautical charts must be labeled with navigational and depth information. There are a few software solutions in the market that do label placement automatically for any kind of map or chart. For more information visit the wiki.gis.com article on Automatic label placement.

Details on a nautical chart 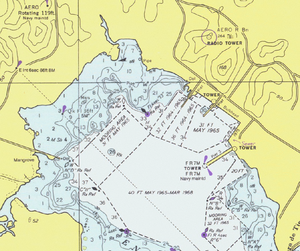 The chart uses symbols to provide pilotage information about the nature and position of features useful to navigators, such as sea bed information, seamarks and landmarks. Some symbols describe the sea bed with information such as its depth, materials as well as possible hazards such as shipwrecks. Other symbols show the position and characteristics of buoys, lights, lighthouses, coastal and land features and structures that are useful for position fixing.

Colours distinguish between man-made features, dry land, sea bed that dries with the tide and seabed that is permanently underwater and indicate water depth.

Use of colour in British Admiralty charts

Depths which have been measured are indicated by the numbers shown on the chart. Depths on charts published in most parts of the world use metres. Older charts, as well as those published by the United States government, may use feet or fathoms. Depth contour lines show the shape of underwater relief. Coloured areas of the sea emphasise shallow water and dangerous underwater obstructions. Depths are measured from the chart datum, which will be stated on the chart; this is often the depth of the lowest tide caused by gravity alone which is known as the "Lowest Astronomical Tide."

Tidal races and other strong currents have special chart symbols. Tidal flow information may be shown on charts using tidal diamonds, indicating the speed and bearing of the tidal flow during each hour of the tidal cycle.