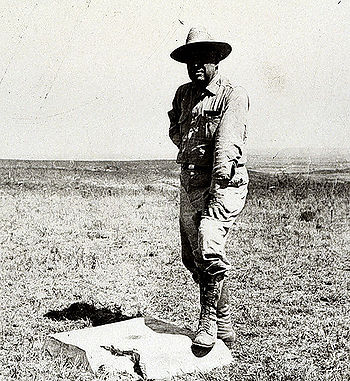 Triangulation station at Meade's Ranch circa 1940. Control point for the North American Datum of 1927

The North American Datum of 1927 (NAD27) is a datum based on the Clarke Ellipsoid of 1866. This Ellipsoid was created by way of manual surveying of the entire continent. The geodetic "center" of NAD27 is a base station at Meades Ranch in Kansas.

Because Earth deviates significantly from a perfect ellipsoid, the ellipsoid that best approximates its shape varies region by region across the world. Clarke 1866, and North American Datum of 1927 with it, were surveyed to best suit North America as a whole. Likewise, historically most regions of the world used ellipsoids measured locally to best suit the vagaries of earth's shape in their respective locales. While ensuring the most accuracy locally, this practice makes integrating and disseminating information across regions troublesome.

As satellite geodesy and remote sensing technology reached high precision and were made available for civilian applications, it became feasible to acquire information referred to a single global ellipsoid. This is because satellites naturally deal with Earth as a monolithic body. Therefore the GRS 80 ellipsoid was developed for best approximating the earth as a whole, and it became the foundation for the North American Datum of 1983. Though generally GRS 80 and its close relative WGS 84 are not the best fit for any given region, a need for the closest fit largely evaporates when a global survey is combined with computers, databases, and software able to compensate for local conditions.

HARN or the High Accuracy Reference Network was an effort to establish GPS control points consistent with NAD 83. The effort started in Tennessee in 1989 and continued throughout all states

CORS or the Continuously Operating Reference Stations are fixed stations at locations throughout the United States and several other locations. These CORS are equipped with GPS receivers. Individuals may use CORS data to improve GPS precision to within 2cm. 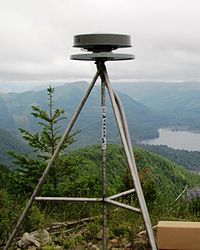 A CORS station near Ravensdale, Washington

Comparisons Between NAD27 and NAD83

A point having a given latitude and longitude in NAD27 may be displaced on the order of many tens of meters from another point having the identical latitude and longitude in NAD83, so it is important to specify the datum along with the coordinates. The North American Datum of 1927 is defined by the latitude and longitude of an initial point (Meades Ranch in Kansas), the direction of a line between this point and a specified second point, and two dimensions that define the spheroid. The North American Datum of 1983 is based on a newer defined spheroid (GRS 80); it is an Earth-centered (or "geocentric") datum having no initial point or initial direction.