An oblate spheroid, or oblatum, is a rotationally symmetric ellipsoid having a polar axis shorter than the diameter of the equatorial circle whose plane bisects it.[1] An M&M's candy or Skittles is an approximate example of an oblate spheroid. Oblate spheroids stand in contrast to prolate spheroids.

It can be formed by rotating an ellipse about its minor axis, forming an equator with the end points of the major axis. As with all ellipsoids, it can also be described by the lengths of three mutually perpendicular principal axes, which are in this case two arbitrary equatorial semi-major axes and one semi-minor axis. 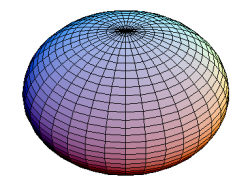 These are just two of several different parameters used to define an ellipse and its solid body counterparts, all of which are ultimately trigonometric functions of the ellipse's modular angle, or angular eccentricity, ɶ:

The oblate spheroid is the approximate shape of many planets and celestial bodies, including Saturn and Altair, and – to a lesser extent – the Earth (with a = 6378.137 km and b ≈ 6356.752 km, providing a circularity of 0.99664717 and inverse flattening of 298.2572). It is therefore the most-used geometric figure for defining reference ellipsoids, upon which cartographic and geodetic systems are based.