OpenStreetMap (OSM) is a collaborative project to create a free editable map of the world.

The maps are created using data from portable GPS devices, aerial photography, other free sources or simply from local knowledge. Both rendered images and the vector dataset are available for download under a Creative Commons Attribution-ShareAlike 2.0 licence.[1] It is expected that the project will adopt the Open Database License shortly.[1]

The map display features a prominent 'Edit' tab and a full revision history is maintained. Registered users can upload GPS track logs and edit the vector data using the given editing tools.

OpenStreetMap (OSM) was founded in July 2004 by Steve Coast. In April 2006, a foundation was established with the aim of encouraging the growth, development and distribution of free geospatial data and providing geospatial data for anybody to use and share. In December 2006 Yahoo confirmed that OpenStreetMap could use their aerial photography as a backdrop for map production.[2]

In April 2007 Automotive Navigation Data donated a complete road dataset for the Netherlands and trunk road data for India and China to the project[3] and by July 2007, when the first OSM international The State of the Map conference was held there were 9,000 registered users. Sponsors of the event included Google, Yahoo and Multimap. In August 2007 an independent project, OpenAerialMap, was launched, to hold a database of aerial photography available on open licensing[4] and in October 2007 OpenStreetMap completed the import of a US Census TIGER road dataset.[5] In December Oxford University became the first major organisation to use OpenStreetMap data on their main website.[6]

In January 2008 functionality was made available to download map data into a GPS unit for use by cyclists.[7] In February 2008 a series of workshops were held in India.[8] In March two founders announced that they have received venture capital funding of 2.4m euros for Cloud Made, a commercial company that will use OpenStreetMap data.[9] 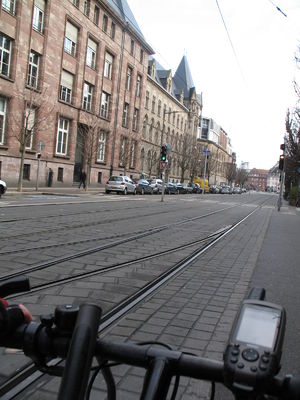 Recording of a GPS trace.

The initial map data was built from scratch by volunteers performing systematic ground surveys using a handheld GPS unit and a notebook or a voice recorder. Data was then entered into the OpenStreetMap database on a computer.

The availability of aerial photography and other data sources from commercial and government sources has greatly increased the speed of this work and has allowed land-use data to be collected more accurately.

When large datasets are available, a technical team will manage the conversion and import of the data. 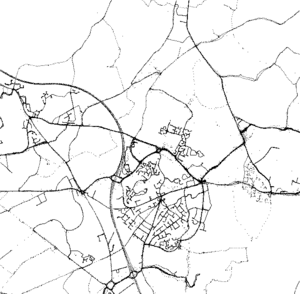 Ground surveys are usually performed by a volunteer. Map data is usually collected using a GPS unit, though this isn't strictly necessary if an area has already been traced from satellite imagery.

Once the data has been collected, it's entered into the database using one of several purpose-built map editors. Some committed contributors are systematically mapping whole towns and cities over a period of time, or organizing mapping parties to intensively map a particular area over an evening or a weekend.

In addition to structured surveys, a number of smaller edits are made by contributors to correct errors or add features.

Some government agencies have released official data on appropriate licenses. Much of this data has come from the United States, where the federal government cannot copyright such data.

The UK Ordnance Survey is legally a Trading Fund and as such is required to earn money from selling its data and is not open to contributing data to the project.[12] Consideration is however currently being given to changing the structure of the organization to make its data more available.[13] In 2006, The Guardian launched a campaign named 'Free our data' to support freeing up government data, including mapping data[14]. The Government's Shareholder Executive will report on its latest review of the Trading Funds in the 2008 Pre-Budget Report, due Fall 2008.

Out-of-copyright maps can be good sources of information about features which don't change frequently. Copyright periods vary, but in the UK 'Crown copyright' expires after 50 years and hence Ordnance Survey maps until the 1960s can legally be used. A complete set of UK 1 inch/mile maps from the late 1940s and early 1950s have been collected, scanned and are available online as a resource for contributors.

Some commercial companies have donated data to the project on suitable licenses. Notably, Automotive Navigation Data (AND) provided a complete road dataset for the Netherlands and also details of trunk roads in China and India.

During December 2006, Yahoo! confirmed that OpenStreetMap was now able to make use of their vertical aerial imagery. The imagery is now available within the editing software as an overlay. Contributors can create vector-based maps as a derived work released with a free and open license.[15]

OpenStreetMap data is published under an open content license, with the intention of promoting free use and re-distribution of the data (both commercial and non-commercial). The license used is currently the Creative Commons Attribution-Share Alike 2.0 licence, however legal investigation work and community consultation is under-way to re-license the project under the Open Database License (ODbL) from Open Data Commons (ODC) which is more suitable for a map dataset.[1]

All data added to the project needs to have a license compatible with the Creative Commons Attribution-Share Alike license. These licenses can include out of copyright information, public domain or other licenses. All contributors must register the project and agree to provide data on a Creative Commons BY-SA 2.0 license if the licensing of the source data is unsuitable. This involves examining licenses from government data to determine if they are suitable. The use of unfree data is a severe problem for a map. The only way to prove that there is no data that comes from unfree sources is to verify the whole area in question.

A subset of contributors have made their contributions available as public domain.[16]

Software used in the production and presentation of OpenStreetMap data is available from many different projects and each may have their own licencing. The core software to manage the databases, user interaction and the API are available under a GNU General Public License.[17]

OpenStreetMap data is available through an increasing number of sites and in different formats:

Mapping is available online both on general mapping sites:

A wide variety of programs exist that use OpenStreetMap data to display maps on mobile phones[20], supporting a large number of different devices. Among supported devices are nearly all phones that can run java for mobiles. This makes OpenStreetMap available to the majority of current phones as well as platforms like the iPhone[21], Windows Mobile[22] or Openmoko. The various programs distinguish themselves according to key features. Some of these key features are: whether they use raster maps or vector maps, whether they need an internet connection or can be used offline, whether they support address search or advanced features like routing; thus catering for a large number of different needs for viewing maps. With the inclusion of OpenStreetMap, there is now support in several programming libraries for mobile phones[23][24]. It is also possible to include OpenStreetMap (OSM) in other location-based services.

Yahoo has started using OpenStreetMap data within its Flickr service for various cities around the world, including Baghdad, Beijing, Kabul, Sydney and Tokyo.[25][26][27].

Map data is available for download in a variety of formats and for different geographical areas: 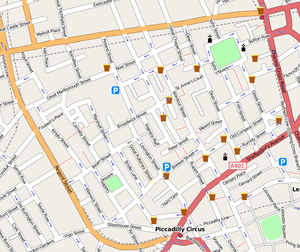 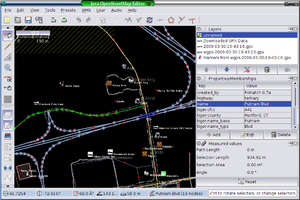 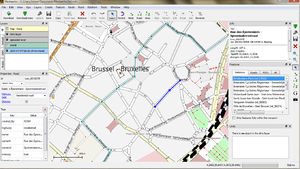 Up to version 0.4 of its protocol, an intermediate element between nodes and ways (segments) was also used.

An optional ontology of map features (the meaning of tags) is maintained on a wiki.