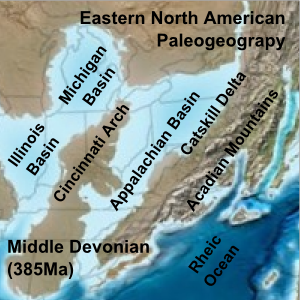 Palaeogeography (also spelled paleogeography) is the study of what the geography was in times past. It is most often used about the physical landscape, although nothing excludes its use in reference to the human or cultural environment. If the topic is landforms it could also be called paleogeomorphology.

In petroleum geology the term paleogeographic analysis is used for the detailed study of sedimentary basins, since the ancient geomorphological environments of the Earth's surface are preserved in the stratigraphic record. Paleogeographers also study the sedimentary environment associated with fossils to aid in the understanding of evolutionary development of extinct species. The reconstruction of prehistoric continents and oceans depends on paleogeographic evidence. Thus paleogeography provides critical evidence for the development of continental drift and current plate tectonic theories. For example, knowledge of the shape and latitudinal location of supercontinents such as Pangaea and ancient oceans such as Panthalassa result from paleogeographic studies.