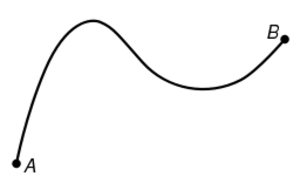 The points traced by a path from A to B in R². However, different paths can trace the same set of points.

In mathematics, a path in a topological space X is a continuous map f from the unit interval I = [0,1] to X

The initial point of the path is f(0) and the terminal point is f(1). One often speaks of a "path from x to y" where x and y are the initial and terminal points of the path. Note that a path is not just a subset of X which "looks like" a curve, it also includes a parametrization. For example, the maps f(x) = x and g(x) = x2 represent two different paths from 0 to 1 on the real line.

This is because S1 may be regarded as a quotient of I under the identification 0 ∼ 1. The set of all loops in X forms a space called the loop space of X.

One can also define paths and loops in pointed spaces, which are important in homotopy theory. If X is a topological space with basepoint x0, then a path in X is one whose initial point in x0. Likewise, a loop in X is one that is based at x0. 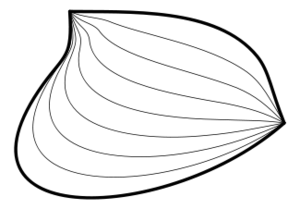 A homotopy between two paths.

Paths and loops are central subjects of study in the branch of algebraic topology called homotopy theory. A homotopy of paths makes precise the notion of continuously deforming a path while keeping its endpoints fixed.

Specifically, a homotopy of paths, or path-homotopy, in X is a family of paths ft : I → X indexed by I such that

The paths f0 and f1 connected by a homotopy are said to homotopic (or more precisely path-homotopic, to distinguish between the relation defined on all continuous functions between fixed spaces). One can likewise define a homotopy of loops keeping the base point fixed.

The relation of being homotopic is an equivalence relation on paths in a topological space. The equivalence class of a path f under this relation is called the homotopy class of f, often denoted [f].

One can compose paths in a topological space in an obvious manner. Suppose f is a path from x to y and g is a path from y to z. The path fg is defined as the path obtained by first traversing f and then traversing g:

Path composition, whenever defined, is not associative due to the difference in parametrization. However it is associative up to path-homotopy. That is, [(fg)h] = [f(gh)]. Path composition defines a group structure on the set of homotopy classes of loops based at a point x0 in X. The resultant group is called the fundamental group of X based at x0, usually denoted π1(X,x0).

In situations calling for associativity of path composition "on the nose," a path in X may instead be defined as a continuous map from an interval [0,a] to X for any real a ≥ 0. A path f of this kind has a length |f| defined as a. Path composition is then defined as before with the following modification: