Photomapping involves the process of drawing a map from a photographic base. “In all likelihood, computer map making, including analogue processing, will have replaced manual map making for well over 90 per cent of all maps"[1].

Photomapping is the process of making a map with “cartographic enhancements”[2] that have been drawn from a photomosaic[3] that is a “a composite photographic image of the ground” or more precisely as a controlled photomosaic where “individual photographs are rectified for tilt and brought to a common scale (at least at certain control points).”

Rectification of imagery is generally achieved by "fitting the projected images of each photograph to a set of four control points whose positions have been derived from an existing map or from ground measurements. When these rectified, scaled photographs are positioned on a grid of control points, a good correspondence can be achieved between them through skillful trimming and fitting and the use of the areas around the principal point where the relief displacements (which cannot be removed) are at a minimum.”[2]

“It is quite reasonable to conclude that some form of photomap will become the standard general map of the future.” [4] go on to suggest that, “photomapping would appear to be the only way to take reasonable advantage” of future data sources like high altitude aircraft and satellite imagery. 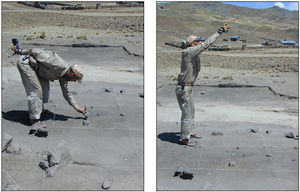 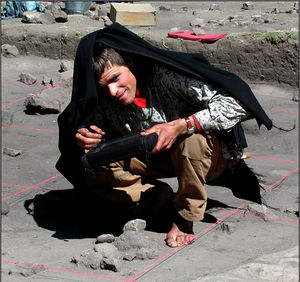 Demonstrating the link between orthophotomapping and archaeology [5], historic airphotos photos were used to aid in developing a reconstruction of the Ventura mission that guided excavations of the structure's walls.

Hand held near nadir over head digital photographs have been used with geographic information systems (GIS) to record excavation exposures[19][20][21][22][23].