From wiki.gis.com
Jump to: navigation, search
Pictorial maps are a category of maps that are also loosely called illustrated maps, panoramic maps, perspective maps, bird’s-eye view maps and Geopictorial maps amongst others. 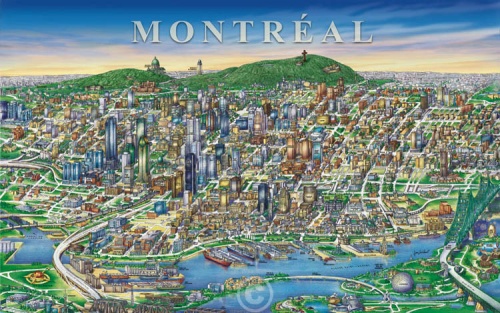 In contrast to the regular road map, Atlas or topographic cartography, pictorial maps depict a given territory with a more artistic rather than technical style. The cartography can be a sophisticated 3-D perspective landscape or a simple map graphic enlivened with illustrations of buildings, people and animals. They can feature all sorts of varied topics like historical events, legendary figures or local agricultural products and cover anything from an entire continent to a college campus. Drawn by specialized artists and illustrators, pictorial maps are a rich, centuries-old tradition and a diverse art form that ranges from cartoon maps on restaurant placemats to treasured art prints in museums.

Pictorial maps usually show an area as if viewed from above at an oblique angle. They are not generally drawn to scale in order to show street patterns, individual buildings, and major landscape features in perspective. While regular maps focus on the accurate rendition of distances, pictorial maps enhance landmarks and often incorporate a complex interplay of different scales into one image in order to give the viewer a more familiar sense of recognition. With an emphasis on objects and style, these maps cover an artistic spectrum from childlike caricature to spectacular landscape graphic with the better ones being attractive, informative and highly accurate. Some require thousands of hours to produce.

The history and tradition of pictorial maps

Will Durant said that maps show us the face of History. This is especially true of pictorial maps because their vocation has always been to present a visual message. Throughout the ages, pictorial maps have been used to show the cuisine of a country, the industries of a city, the attractions of a tourist town, the history of a region or its holy shrines.

In Medieval cartography, pictorial icons as well as religious and historical ideas usually overshadowed accurate geographic proportions. A classic example of this is the T and O map which represented the three known continents in the form of a cross with Jerusalem at its center. The more precise art of illustrating detailed bird’s-eye-view urban landscapes flourished during the European Renaissance. As emerging trade centers such as Venice began to prosper, local rulers commissioned artists to develop pictorial overviews of their towns to help them organize trade fairs and direct the increasing flow of visiting merchants. When printing came around, pictorial maps evolved into some of the earliest forms of advertising as cities competed amongst themselves to attract larger shares of the known world’s commerce.

Later, during the Age of Exploration, maps became progressively more accurate for navigation needs and were often sprinkled with sketches and drawings such as sailing ships showing the direction of trade winds, little trees and mounds to represent forests and mountains and of course, plenty of sea creatures and exotic natives much of them imaginary. As the need for geographical accuracy increased, these illustrations gradually slipped off the map and onto the borders and eventually disappeared altogether in the wake of modern scientific cartography. 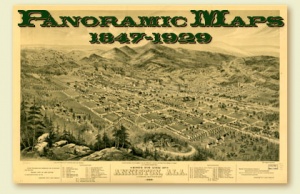 As cartography evolved, the pictorial art form went its own way and regained popularity in the 19th century with the development of the railroads. Between 1825 and 1875, the production and collection of panoramic maps of cities rose to something of a mania. In the U.S. alone, thousands of panoramic maps were produced. Somewhat like the websites of their time, every town had to have one to remain competitive in attracting industry and the immigrant trade. Sometimes artistic exaggeration bordered on the fraudulent as some travelers were drawn by images of idyllic, bustling towns with humming factories only to find a sad little bunch of mud-soaked shacks when they got there. A vast collection of these prints is maintained by the Library of Congress and many of the more beautiful ones continue to be reprinted and sold to this day [1]. 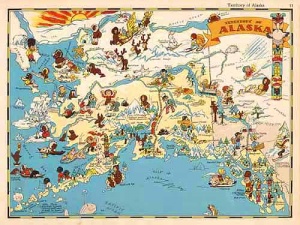 With the growth of tourism, pictorial mapmaking reappeared as a popular culture art form in the 1920s through the 1950s, often with a whimsical Art Deco style that reflects the period.

Another resurgence occurred in the 1970s and 80s. This was the heyday of companies like Archar and Descartes who produced hundreds of colorful promotional maps of mainly American and Canadian cities. Local businesses were flatteringly drawn on these 'Character maps' with their logos proudly embedded on their buildings. Looking at these maps and who sponsored them over the years, one can clearly see the changing face of industry as the dominant illustrations of manufacturing plants gave way to those of business parks and logos of the service and high tech economy.

Today, like in all other forms of media, the digital revolution has changed the way pictorial maps are researched and executed. But like good writing, a good pictorial map is always a result of intricate labor, esthetic choices and creative editing rather than technology. In the era when Google Earth can give us fly-over access to nearly any spot on the globe, it is amazing to realize that many of the beautiful prints of yore were executed before there were airplanes or even cameras.
Whether drawn with quill, pen or pixels, pictorial maps are always scaled in the perspective of the imagination. 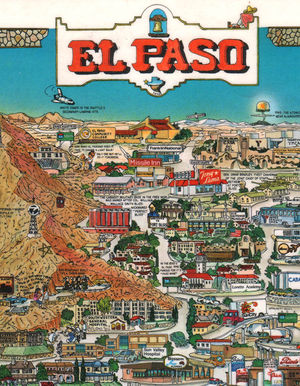 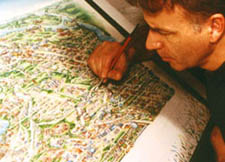 Ironically, despite all the changes that they record, very little has changed in the business of creating pictorial maps over the centuries. Showing off a given town, attracting visitors and stirring up local pride is what they have always been about. Most of these maps were and continue to be created by a handful of itinerant specialists who keep up the tradition. Many of them traveled from city to city enlisting the support of local merchants, industrialists and civic organizations whose endorsement would of course guarantee a prominent place for their properties on the map.

Edwin Whitefield for instance, one of the more prolific 19th century American pictorial map artists, would require about 200 subscribers before he put pen to paper. Once he secured the profitability of the venture, Whitefield would be seen all over town furiously sketching every building. Then, choosing an imaginary aerial vantage point, he would integrate all his sketches into a complete and detailed drawing of the city. Then after that, say the chroniclers of the time, Whitefield would once again be seen furiously darting all over town to collect from all his sponsors. Says Jean-Louis Rheault, a contemporary pictorial map illustrator: 'Pictorial maps - with their emphasis on what's important and eye-catching - make it easier to figure out what's where.'.[2]