From wiki.gis.com
Jump to: navigation, search
For other uses, see Plot (graphics). 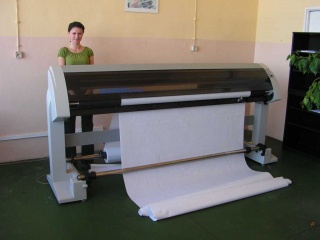 A plotter is a vector graphics printing device to print graphical plots, that connects to a computer. There are two types of main plotters. Those are pen plotters and electrostatic plotters.

Pen plotters print by moving a pen across the surface of a piece of paper. This means that plotters are restricted to line art, rather than raster graphics as with other printers. Pen plotters can draw complex line art, including text, but do so very slowly because of the mechanical movement of the pens. Pen Plotters are incapable of creating a solid region of color; but can hatch an area by drawing a number of close, regular lines. When computer memory was very expensive, and processor power was very limited, this was often the fastest way to produce color high-resolution vector-based artwork, or very large drawings efficiently.

Traditionally, printers are primarily for printing text. This makes it fairly easy to control, simply sending the text to the printer is usually enough to generate a page of output. This is not the case of the line art on a plotter, where a number of printer control languages were created to send the more detailed commands like "lift pen from paper", "place pen on paper", or "draw a line from here to here". The two common ASCII-based plotter control languages are Hewlett-Packard's HPGL2 or Houston Instruments DMPL with commands such as "PA 3000, 2000; PD".

Programmers using FORTRAN or BASIC generally did not program these directly, but used software packages such as the Calcomp library, or device independent graphics packages such as Hewlett-Packard's AGL libraries or BASIC extensions or high end packages such as DISSPLA. These would establish scaling factors from world coordinates to device coordinates, and translating to the low level device commands. For example to plot X*X in HP 9830 BASIC, the program would be

Early plotters (e.g. the Calcomp 565 of 1959) worked by placing the paper over a roller which moved the paper back and forth for X motion, while the pen moved back and forth on a single arm for Y motion. Another approach (e.g. Computervision's Interact I) involved attaching ball-point pens to drafting pantographs and driving the machines with motors controlled by the computer. This had the disadvantage of being somewhat slow to move, as well as requiring floor space equal to the size of the paper, but could double as a digitizer. A later change was the addition of an electrically controlled clamp to hold the pens, which allowed them to be changed and thus create multi-colored output.

Hewlett Packard and Tektronix created desk-sized flatbed plotters in the late 1970s. In the 1980s, the small and lightweight HP 7470 used an innovative "grit wheel" mechanism which moved only the paper. Modern desktop scanners use a somewhat similar arrangement. These smaller "home-use" plotters became popular for desktop business graphics, but their low speed meant they were not useful for general printing purposes, and another conventional printer would be required for those jobs. One category introduced by Hewlett Packard's MultiPlot for the HP 2647 was the "word chart" which used the plotter to draw large letters on a transparency. This was the forerunner of the modern Powerpoint chart. With the widespread availability of high-resolution inkjet and laser printers, inexpensive memory and computers fast enough to rasterize color images, pen plotters have all but disappeared.

Plotters were also used in the Create-A-Card kiosks that were available for a while in the greeting card area of supermarkets that used the HP 7475 6 pen plotter.

Plotters are used primarily in technical drawing and CAD applications, where they have the advantage of working on very large paper sizes while maintaining high resolution. Another use has been found by replacing the pen with a cutter, and in this form plotters can be found in many garment and sign shops.

If a plotter was commanded to use different colors it had to replace the pen and select the wanted color and/or width.

A niche application of plotters is in creating tactile images for visually handicapped people on special thermal cell paper.

Pen plotters have essentially become obsolete, and have been replaced by large-format inkjet printers and LED toner based printers. Such printers are often still known as plotters, even though they are raster devices rather than pen based plotters by the definition of this article. The newer plotters still understand vector languages such as HPGL2. This is because the language is an efficient way to describe how to draw the file using just text commands. A technical drawing in HPGL2 can be quite a bit smaller file than the same drawing in a pure raster form.

A pen plotter's speed is primarily limited by the type of pen used.

One type of plotter pen uses a cellulose fiber rod inserted through a circular foam tube saturated with ink, with the end of the rod sharpened into a conical tip. As the pen moves across the paper surface, capillary wicking draws the ink from the foam, down the rod, and onto the paper. As the ink supply in the foam is depleted, the migration of ink to the tip begins to slow down, resulting in faint lines. Slowing the plotting speed will allow the lines drawn by a worn-out pen to remain dark, but the fading will continue until the foam is completely depleted. Also as the fiber tip pen is used, the fiber tip slowly wears away from rubbing against the media, wearing down the thin conical tip into a thicker smudged line.

Ball-point plotter pens with refillable clear plastic ink reservoirs are available. They do not have the fading or wear effects of fiber pens, but are generally more expensive and uncommon.

A vinyl sign cutter (sometimes known as a cutting plotter) is used by professional poster and billboard sign-making businesses to produce weather-resistant signs, posters, and billboards using self-colored adhesive-backed vinyl film that has a removable paper backing material. The vinyl can also be applied to car bodies and windows for large, bright company advertising and to sailboat transoms. A similar process is used to cut tinted vinyl for automotive windows.

Colors available are generally limited only by the collection of vinyl on hand. To prevent creasing of the material, it is stored in rolls. Typical vinyl roll sizes are 24-inch and 36-inch width.

Generally the hardware is identical to a traditional plotter except that the ink pen is replaced by a very sharp knife that is use to cut out each shape, and the plotter may have a pressure control to adjust how hard the knife presses down into the vinyl film, allowing designs to be fully or partly cut out. The vinyl knife is usually shaped like a plotter pen and is mounted on ball-bearings so that the knife edge rotates to face the correct direction as the plotter head moves.

Once the letters or designs have been cut out, there are two methods for handling the application.

The most common method:

Sign cutters are primarily used to produce single-color line art. Multiple colors can be cut and assembled but the assembly process is extremely painstaking if the cut sections are thin and flexible.

As with the pen plotter, sign cutting plotters are in decline for general billboard and sign design. They are being replaced by wide-format inkjet printers that use special fade-resistant UV-protected solvent-based inks, which can directly print onto fabrics, vinyls, or plastic sheeting. These large inkjet printers have the added advantage of performing smooth color transitions and photo printing, which sign cutters cannot duplicate.

However, sign cutting plotters are still very much in use for precision cutting of graphics produced by wide-format inkjet printers, for example to produce shaped stickers and window graphics.

A sign cutter typically functions like a traditional roll-fed or sheet-fed plotter, in that the media to be cut is kept rigid by a backing sheet as pieces of vinyl are cut out. As the letters are cut, the backing keeps the material properly aligned in the moving rollers. This does not work when cutting a non-rigid material with no backing, such as fabric textiles or leather. Cutting a hole or slit will cause the unsupported material to droop and fall out of alignment.

The static cutting table uses a large flat vacuum cutting table instead of a roll feed. The surface of the table has a series of small pinholes drilled in it. Material is placed on the table, and a sheet of plastic overlaid onto the fabric. A vacuum pump is turned on, and air pressure pushes down on the plastic cover sheet to hold the fabric in place. The table then operates like a normal vector plotter, using various cutting tools to cut holes or slits into the fabric. The plastic overlay is also cut, which leads to a slight loss of vacuum, but this loss is usually not significant.

This configuration allows static cutting tables to cut flexible and non-rigid materials that are difficult or impossible to cut with roll-fed plotters. Static cutters are also capable of cutting much thicker and heavier materials than a typical roll-fed or sheet-fed plotter.