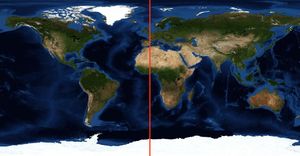 The Prime Meridian is the meridian (line of longitude) at which the longitude is defined to be 0°.

The Prime Meridian and its opposite the 180th meridian (at 180° longitude), which the International Date Line generally follows, form a great circle that divides the Earth into the Eastern and Western Hemispheres.

By international convention, the modern Prime Meridian passes through the Royal Observatory, Greenwich (at 51°28′38″N 0°00′00″E﻿ / ﻿51.47722°N 0°E﻿ / 51.47722; 0﻿ (Greenwich Observatory)), in southeast London, United Kingdom, known as the International Meridian or Greenwich Meridian, although the Prime Meridian is ultimately arbitrary unlike the parallels of latitude, which are defined by the rotational axis of the Earth with the Poles at 90° and the Equator at 0°.