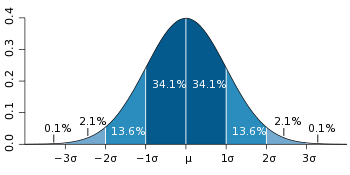 The concept of the probability distribution and the random variables which they describe underlies the mathematical discipline of probability theory, and the science of statistics. There is spread or variability in almost any value that can be measured in a population (e.g. height of people, durability of a metal, etc.); almost all measurements are made with some intrinsic error; in physics many processes are described probabilistically, from the kinetic properties of gases to the quantum mechanical description of fundamental particles. For these and many other reasons, simple numbers are often inadequate for describing a quantity, while probability distributions are often more appropriate.

In the measure-theoretic formalization of probability theory, a random variable is defined as a measurable function X from a probability space

to its observation space

. A probability distribution is the pushforward measure X*P = PX −1 on

Discrete distributions are characterized by a probability mass function,

By one convention, a probability distribution

is called continuous if its cumulative distribution function

is continuous and, therefore, the probability measure of singletons

defined on the real numbers such that

The support of a distribution is the smallest closed interval/set whose complement has probability zero. It may be understood as the points or elements that are actual members of the distribution.

If one is programming and one wishes to sample from a probability distribution (either discrete or continuous), the following algorithm lets one do so. This algorithm assumes that one has access to the inverse of the cumulative distribution (easy to calculate with a discrete distribution, can be approximated for continuous distributions) and a computational primitive called "random()" which returns an arbitrary-precision floating-point-value in the range of [0,1).

Note that often, mathematics environments and computer algebra systems will have some way to represent probability distributions and sample from them. This functionality might even have been developed in third-party libraries. Such packages greatly facilitate such sampling, most likely have optimizations for common distributions, and are likely to be more elegant than the above bare-bones solution.