Transformations on the projective line 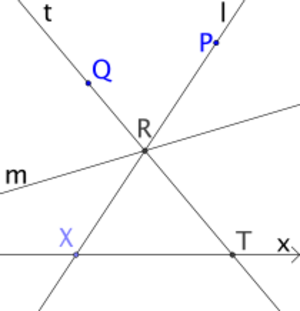 Let X be a point on the x-axis. A projective transformation can be defined geometrically for this line by picking a pair of points P, Q, and a line m, all within the same x-y plane which contains the x-axis upon which the transformation will be performed.

Points P and Q represent two different observers, or points of view. Point R is the position of some object they are observing. Line m is the objective world which they are observing, and the x-axis is the subjective perception of m.

The above is a synthetic description of a one-dimensional projective transformation. It is now desired to convert it to an analytical (Cartesian) description.

. Let line m have slope m (m is being overloaded in meaning).

The slope of line l is

so an arbitrary point (x,y) on line l is given by the equation

On the other hand, any point (x,y) on line m is described by

The intersection of lines l and m is point R, and it is obtained by combining equations (1) and (2):

and solving for x we obtain

x1 is the abscissa of R. The ordinate of R is

Now, knowing both Q and R, the slope of line n is

We want to find the intersection of line n and the x-axis, so let

The equation for abscissas is

which together with equation (4) yields

which is the abscissa of T.

Substitute the values of x1 and y1 into equation (5),

Dissolve the fractions in both numerator and denominator:

Simplify and relabel x as t(x):

t(x) is the projective transformation.

Transformation t(x) can be simplified further. First, add its two terms to form a fraction:

Then, define the coefficients α, β, γ and δ to be the following

Substitute these coefficients into equation (6), in order to produce

It is clear from the synthetic definition that the inverse transformation is obtained by exchanging points P and Q. This can also be shown analytically. If P ↔ Q, then α → α′, β → β′, γ → γ′, and δ → δ′, where

Therefore if the forwards transformation is

then the transformation t′ obtained by exchanging P and Q (P ↔ Q) is:

Dissolve the fractions in both numerator and denominator of the right side of this last equation:

Therefore t′(x) = t−1(x): the inverse projective transformation is obtained by exchanging observers P and Q, or by letting α ↔ δ, β → −β, and γ → −γ. This is, by the way, analogous to the procedure for obtaining the inverse of a two-dimensional matrix:

The composition of these two transformations is

Substitute these coefficients into

Projections operate in a way analogous to matrices. In fact, the composition of transformations can be obtained by multiplying matrices:

Since matrices multiply associatively, it follows that composition of projections is also associative.

Projections have: an operation (composition), associativity, an identity, an inverse and closure, so they form a group.

The cross-ratio defined by means of a projection

Let there be a transformation ts such that ts(A) =

then the three conditions for ts(x) are met when

In equation (10), it is seen that ts(D) does not depend on the coefficients of the projection ts. It only depends on the positions of the points on the "subjective" projective line. This means that the cross-ratio depends only on the relative distances among four collinear points, and not on the projective transformation which was used to obtain (or define) the cross-ratio. The cross ratio is therefore

Transformations on the projective line preserve cross ratio. This will now be proven. Let there be four (collinear) points A, B, C, D. Their cross-ratio is given by equation (11). Let S(x) be a projective transformation:

Transformations on the projective plane

Two-dimensional projective transformations are a type of automorphism of the projective plane onto itself.

Planar transformations can be defined synthetically as follows: point X on a "subjective" plane must be transformed to a point T also on the subjective plane. The transformations uses these tools: a pair of "observation points" P and Q, and an "objective" plane. The subjective and objective planes and the two points all lie in three-dimensional space, and the two planes can intersect at some line.

where the constants m and n are partial slopes and b is the z-intercept.

Let there be a pair of "observation" points P and Q,

Point X must be transformed to a point T,

also on the "subjective" plane.

The analytical results are a pair of equations, one for abscissa Tx and one for ordinate Ty:

There are (at most) nine degrees of freedom for defining a 2D transformation: Px, Py, Pz, Qx, Qy, Qz, m, n, b. Notice that equations (12) and (13) have the same denominators, and that Ty can be obtained from Tx by exchanging m with n, and x with y (including subscripts of P and Q).

Equations (14) and (15) together describe the trilinear fractional transformation.

Given T1 defined by

and given T2 defined by

then T3 can be calculated by substituting T1 into T2,

Multiply numerator and denominator by the same trinomial,

Group the coefficients of x, y, and 1:

The remaining three coefficients can be verified thus

Multiply numerator and denominator by the same trinomial,

Group the coefficients of x, y, and 1:

The three remaining coefficients just obtained are the same as those obtained through equation (16). Q.E.D.

into another straight line

where n and c are constants and equal to

We should now obtain c to be

Add the two fractions in the numerator:

Distribute binomials in parentheses in the numerator, then cancel out equal and opposite terms:

The terms with the numeri cossici cancel out, therefore

Comparing c with n, notice that their denominators are the same. Also, n is obtained from c by exchanging the following coefficients:

There is also the following exchange symmetry between the numerator and denominator of n:

The numerator and denominator of c also have exchange symmetry:

The exchange symmetry between n and c can be chunked into binomials:

All of these exchange symmetries amount to exchanging pairs of rows in the coefficient matrix.

into another conic section

Equation (17) can be expressed in terms of the inverse transformation:

The denominators can be "dissolved" by multiplying both sides of the equation by the square of a trinomial:

Expand the products of trinomials and collect common powers of Tx and Ty:

where Δ is the determinant of the unprimed coefficient matrix.

Let four points A, B, C, D be collinear. Let there be a planar projectivity T which transforms these points into points A′, B′, C′, and D′. It was already shown that lines are transformed into lines, so that the transformed points A′ through D′ will also be collinear. Then it will turn out that the cross-ratio of the original four points is the same as the cross-ratio of their transforms:

If the two-dimensional coordinates of four points are known, and if the four points are collinear, then their cross-ratio can be found from their abscissas alone. It is possible to project the points onto a horizontal line by means of a pencil of vertical lines issuing from a point on the line at infinity:

be the first half of a trilinear transformation. Then

It is not necessary to calculate the transformed cross-ratio. Just let

but it has already been shown that bilinear fractional transformations preserve cross-ratio. Q.E.D.

The following is a rather simple example of a planar projectivity:

The coefficient matrix of this projectivity T is

and it is easy to verify that MT is its own inverse.

The locus of points described parametrically as

describe a circle, due to the trigonometric identity

which has the same form as the canonical equation of a circle. Applying the projectivity T yields the locus of points described parametrically by

which describe a hyperbola, due to the trigonometric identity

which has the same form as the canonical equation of a hyperbola. Notice that points

The ratio of infinity over infinity is indeterminate which means that it can be set to any value y desired.

This example emphasizes that in the real projective plane, RP², a hyperbola is a closed curve which passes twice through the line at infinity. But what does the transformation do to a parabola?

Let the locus of points

describe a parabola. Its transformation is

which is a hyperbola whose asymptotes are the x-axis and the y-axis and whose wings lie in the first quadrant and the third quadrant. Likewise, the hyperbola

is transformed by T into the parabola

On the other hand, the parabola described by the locus of points

is transformed by T into itself: this demonstrates that a parabola intersects the line at infinity at a single point.

Three-dimensional transformations can be defined synthetically as follows: point X on a "subjective" 3-space must be transformed to a point T also on the subjective space. The transformations uses these elements: a pair of "observation points" P and Q, and an "objective" 3-space. The subjective and objective spaces and the two points all lie in four-dimensional space, and the two 3-spaces can intersect at some plane.

Let there be an "objective" 3-space described by

Draw line l1 through points P and X. This line intersects the objective plane at R. This intersection can be described parametrically as follows:

This implies the following four equations:

Substitute the first three equations into the last one:

Draw line l2 through points R and Q. This line intersects the subjective 3-space at T. This intersection can be represented parametrically as follows:

This implies the following four equations:

The last equation can be solved for λ2,

which can then be substituted into the other three equations:

Substitute the values for Rx, Ry, Rz, and Rt obtained from the first intersection into the above equations for Tx, Ty, and Tz,

Multiply both numerators and denominators of the above three equations by the denominator of lambda1: λ1D,

Plug in the values of the numerator and denominator of lambda1:

The numerator TxN can be expanded. It will be found that second-degree terms of x, y, and z will cancel each other out. Then collecting terms with common x, y, and z yields

The numerator TyN, when expanded and then simplified, becomes

Then the transformation in 3-space can be expressed as follows,

Whenever this matrix is invertible, its coefficients will describe a quadrilinear fractional transformation.

such that the submatrix

Given a pair of quadrilinear fractional transformations T1 and T2, whose coefficient matrices are

is equal to the product of the first and second coefficient matrices,

Given a spatial projectivity T1 whose coefficient matrix is

is the inverse of T1′s coefficient matrix,

This subgroup of quadrilinear transformations all have the form

be the equation of a plane. This is equivalent to

Equation (21) can be expressed as a matrix product: 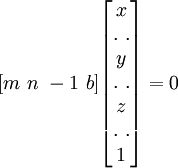 A permutation matrix can be interposed between the two vectors, in order to make the plane vector have homogeneous coordinates:

A quadrilinear transformation should convert this to

Equation (22) is equivalent to

Equation (27) describes how 3-space transformations convert a plane (m, n, b) into another plane (Tm, Tn, Tb) where