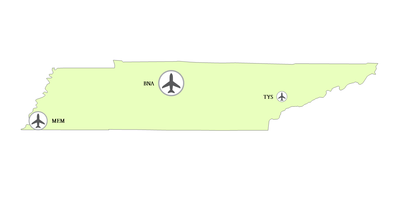 An example of a Proportional Symbol Map of major airports in Tennessee based on air traffic.

A Proportional symbol map is a type of Thematic map that uses map symbols that vary in size to represent a quantitative variable. [1]Symbols vary in height, length, area, or volume from place to place depending on the variable that they represent. [2] For example, discs may be used to show the location of cities within the map where the size of the disc is proportional to the population of the city.

This type of map is useful for visualization when raw data cannot be dealt with as a ratio or proportion. Although circles are the most typical symbol because they are more compact due to their low perimeter to area ratio, studies show that it is easier for the reader to estimate the size of the symbol if it is a square or a bar. [3] The best way to increase the reader's ability to correctly estimate the size of a circle is through effective legend design, including providing examples of different sized circles which will be shown in the map. Proportional symbol maps are effective because they allow the reader to understand large quantities of data in a fast and simple way.

There are two different types of proportional symbols: geometric and pictographic. Geometric are symbols of shapes typically circles, triangles or squares. Pictographic symbols are those of pictures. Typically the picture symbol is in very similar relation to the value, such as a house or a field of wheat represented by small bushels of wheat. Three-dimensional versions of geometric and pictographic symbols can also be used.

It is important to keep in mind that it should be easy for the user to estimate the value of each proportional symbol. Research has been conducted to determine how map users interpret symbols, and it was discovered that users can interpret values of bars and rectangle symbols better than circle proportional symbols. However, the rectangle and bar symbols can also make a map more cluttered. Pictographic symbols can be difficult to interpret because of their complexity, especially if they are in a congested area. Three-dimensional symbols, though fascinating to look at, are also more difficult to interpret. Choosing the right symbol can be difficult, but it is a critical step in making an effective proportional symbol map. [4]

The above mentioned proportional symbols are examples of point symbols. Proportional data can be represented in other ways, such as on flow maps and cartograms. A flow map uses arrows or lines of varying thickness to represent the movement of objects. A cartogram is an abstract map that scales geographic areas (i.e. countries) proportionally to the value of an attribute.

Arguably the most important part of proportional symbol maps is the scaling technique used to represent data. Though under some debate, absolute scaling, apparent magnitude scaling, and range grading are the three most common types of scaling. [5] Scaling is important to ensure that the map is legible by making it possible for the reader to estimate the value of the symbol.

If circles are being used, the sizes of all symbols are calculated based on a chosen size for any one of the symbols. Say the cartographer decides that a value v0 will have a circle of radius r0. Then for any other value v, the radius r is determined by setting the areas in direct proportion to the values:

This can then be solved for r: 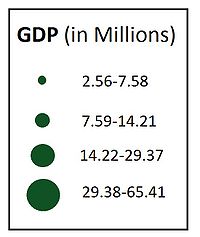 This is an example of a legend for a symbol using range grading. Notice how the four symbols can represent all ranges of the GDP variable.

This method classifies the data being represented into different groups or classes. These groups will be a range of values, and all cases that have values within a given range will all have the same-sized symbol. Range Grading makes it relatively easy to match a symbol to its proportional values.

A common problem with proportional symbol maps is that there can be overlap and congestion of different symbols. A way to fix this problem would be to make the symbols on top of the overlapped symbols transparent so that the map viewer can see the symbols beneath. Another way to combat this problem is to manually move the symbols apart from each other. This, however, brings up a problem with disassociating the feature with its symbol. Moving the symbols apart from each other would only work if the features were still associated with their symbol after they were moved. [7]