From wiki.gis.com
(Redirected from Puck)
Jump to: navigation, search
This article is about the computer input device. For tablet computers, see tablet PC. 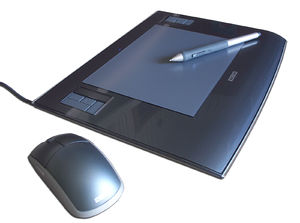 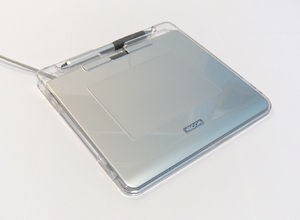 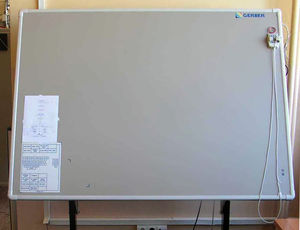 A graphics tablet (or digitizing tablet, graphics pad, drawing tablet[1]) is a computer input device that allows one to hand-draw images and graphics, similar to the way one draws images with a pencil and paper. These tablets may also be used to capture data or handwritten signatures.

A Graphics tablet (also called pen pad or digitizer) consists of a flat surface upon which the user may "draw" an image using an attached stylus, a pen-like drawing apparatus. The image generally does not appear on the tablet itself but, rather, is displayed on the computer monitor. Some tablets however, come as a functioning secondary computer screen that you can interact with directly using the stylus.

Some tablets are intended as a general replacement for a mouse as the primary pointing and navigation device for desktop computers.

Early graphics tablets are most commonly known as spark or acoustic tablets, used a stylus that generated clicks with a spark plug. The clicks were then triangulated by a series of microphones to locate the pen in space. The system was fairly complex and expensive, and the sensors were susceptible to interference by external noise.

The first electronic handwriting tablet was the Telautograph, patented by Elisha Gray in 1888 [2]. Elisha Gray is best known as a contemporaneous inventor of the telephone to Alexander Graham Bell.

The first graphics tablet resembling contemporary tablets and used for handwriting recognition by a computer was the Styalator[3] in 1957. Better known (and often mis-stated as the first digitizer tablet) is the RAND Tablet[4] also known as the Grafacon (for Graphic Converter), introduced in 1964. The RAND Tablet employed a grid of wires under the surface of the pad that encoded horizontal and vertical coordinates in a small magnetic signal. The stylus would receive the magnetic signal, which could then be decoded back as coordinate information.

Digitizers were popularized in the mid 1970s and early 1980s by the commercial success of the ID (Intelligent Digitizer) and BitPad manufactured by the Summagraphics Corp. These digitizers were used as the input device for many high-end CAD (Computer Aided Design) systems as well as bundled with PC's and PC based CAD software like AutoCAD.

Summagraphics also made an OEM version of its BitPad which was sold by Apple Computer as the Apple Graphics Tablet accessory to their Apple II. These tablets used a magnetostriction technology which used wires made of a special alloy stretched over a solid substrate to accurately locate the tip of a stylus or the center of a digitizer cursor on the surface of the tablet. This technology also allowed Proximity or "Z" axis measurement.

The first home computer graphics tablet was the KoalaPad. Though originally designed for the Apple II, the Koala eventually broadened its applicability to practically all home computers with graphics support, examples of which include the TRS-80 Color Computer, Commodore 64, and Atari 8-bit family. Competing tablets were eventually produced; the tablets produced by Atari were generally considered to be of high quality.

In 1981, musician Todd Rundgren created the first color graphics tablet software for personal computers, which was licensed to Apple as the Utopia Graphics Tablet System.[5]

In the 1980s, several vendors of graphics tablets began to include additional functions, such as handwriting recognition and on-tablet menus.[6] [7]

There have been many attempts to categorize the technologies that have been used for graphics tablets. Some of the resulting categories include:

Passive tablets
Passive tablets, most notably those by Wacom, make use of electromagnetic induction technology, where the horizontal and vertical wires of the tablet operate as both transmitting and receiving coils (as opposed to the wires of the RAND Tablet which only transmit). The tablet generates an electromagnetic signal, which is received by the LC circuit in the stylus. The wires in the tablet then change to a receiving mode and read the signal generated by the stylus. Modern arrangements also provide pressure sensitivity and one or more switches (similar to the buttons on a mouse), with the electronics for this information present in the stylus itself, not the tablet. On older tablets, changing the pressure on the stylus nib or pressing a switch changed the properties of the LC circuit, affecting the signal generated by the pen, which modern ones often encode into the signal as a digital data stream. By using electromagnetic signals, the tablet is able to sense the stylus position without the stylus having to even touch the surface, and powering the pen with this signal means that devices used with the tablet never need batteries. Wacom's patents don't permit their competitors to employ such techniques.
Active tablets
Active tablets differ in that the stylus used contains self-powered electronics that generate and transmit a signal to the tablet. These styli rely on an internal battery rather than the tablet for their power, resulting in a bulkier stylus. Eliminating the need to power the pen means that such tablets may listen for pen signals constantly, as they do not have to alternate between transmit and receive modes, which can result in less jitter.
Optical tablets
Optical tablets operate by a very small digital camera in the stylus, and then doing pattern matching on the image of the paper. The most successful example is the technology developed by Anoto.
Acoustic tablets
Early models were described as spark tablets -- a small sound generator was mounted in the stylus, and the acoustic signal picked up by two microphones placed near the writing surface. Some modern designs are able to read positions in three dimensions.[8] [9]

Electromagnetic tablets
Wacom's are one example of a graphics tablet that works by generating and detecting an electromagnetic signal: in the Wacom design, the signal is generated by the pen, and detected by a grid of wires in the tablet. Other designs such as those by Pencept generate a signal in the grid of wires in the tablet, and detect it in the pen.
Capacitive tablets
have also been designed to use an electrostatic or capacitive signal. Scriptel's [10] [11] [12]designs are one example of a high-performance tablet detecting an electrostatic signal. Unlike the type of capacitive design used for touchscreens, the Scriptel design is able to detect the position of the pen while it is in proximity to, or hovering above, the tablet.

For all these technologies, the tablet can use the received signal to also determine the distance of the stylus from the surface of the tablet, the tilt (angle from vertical) of the stylus, and other information in addition to the horizontal and vertical positions.

Compared to touch-sensitive touchscreens, a graphics tablet generally offers much higher precision, the ability to track an object which is not touching the tablet, and can gather much more information about the stylus, but is typically more expensive, and can only be used with the special stylus or other accessories.

Some tablets, especially inexpensive ones aimed at young children, come with a corded stylus, using technology similar to older RAND tablets, although this design is no longer used on any normal tablets.

After styli, pucks are the most commonly used tablet accessory. A puck is a mouse-like device that can detect its absolute position, as opposed to mice, which can only sense their relative velocity on a surface (most tablet drivers are capable of allowing a puck to emulate a mouse in operation, and many pucks are marketed as “mice.”) Pucks range in size and shape, some are externally indistinguishable from a mouse, while others are fairly large device with dozens of buttons and controls. Professional pucks often have a reticule or loupe which allows the user to see the exact point on the tablet's surface targeted by the puck, for detailed tracing and CAD work.

Graphics tablets, because of their stylus-based interface and ability to detect some or all of pressure, tilt, and other attributes of the stylus and its interaction with the tablet, are widely considered to offer a very natural way to create computer graphics, especially two-dimensional computer graphics. Indeed, many graphics packages are able to make use of the pressure (and, in some cases, stylus tilt or rotation) information generated by a tablet, by modifying the brush size, shape, opacity, color, or other attributes based on data received from the graphics tablet.

In East Asia, graphics tablets, or pen tablets as they are known, are widely used in conjunction with input method editor software (IMEs) to write Chinese, Japanese, Korean characters (CJK). The technology is popular and inexpensive and offers a methodology for interacting with the computer in a more natural manner than typing on the keyboard, with the pen tablet supplanting the role of the computer mouse. Uptake of handwriting recognition among users of latin script has been slower.

Tablets are also popular for technical drawings and CAD, as one can put a piece of paper on them without interfering with their function. Finally, tablets are gaining popularity as a replacement for the computer mouse as a pointing device. They can be more intuitive to some users than the mouse, as the position of the pen on the tablet typically corresponds to the location of the pointer on the GUI shown on the computer screen. Those artists using the pen for graphics work will as a matter of convenience use the tablet and pen for standard computer operations rather than put down the pen and find the mouse.

A solution for injuries

Advocates of tablets and pens cite relief from occupational overuse syndrome varieties such as repetitive strain injury [2]. Sufferers of carpal tunnel syndrome also report good results. This is because the use of a computer mouse tends to be very repetitive on the wrist, whereas operating a pen is more natural and tends to involve the movement of the entire arm [3].

Interactive whiteboards offer high resolution wall size graphic tablets up to 95" along with options for pressure and multiple input. These are becoming commonplace in schools and meeting rooms around the world. [13]

Touch screens like those found on some Tablet PCs and the Nintendo DS are operated in similar ways, but they usually use either optical grids or a pressure sensitive film instead, and therefore they do not need a special pointing device.

The graphics tablet are also used for Audio Haptic products where blind or visually impaired people touch swelled graphics on a graphic tablet and get audio feedback from that.[14] The product that is using this technology is called Tactile Talking Tablet or T3.