Quantile classification is a data classification method that distributes a set of values into groups that contain an equal number of values. The attribute values are added up, then divided into the predetermined number of classes. 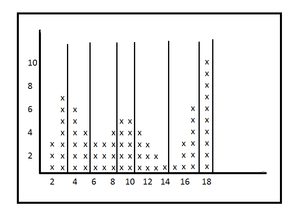 Graph showing 10 points in each interval, which makes the intervals uneven sizes.

Classes are not left empty nor do they have limited or excessive number of values. Because of the way the classes are grouped, the maps can sometimes be confusing or ‘misleading’. This happens because the values that are put into the classes can be similar to one another, or very different from others in the same class [1].

The term quartiles is used when the attribute values are divided into four classes, quintiles for five, sextiles for six etc [2]. 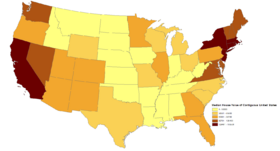 Shows the Median House Value in the Contiguous United States represented by the Quantile Data Classification.

When using quantile classification gaps can occur between the attribute values. These gaps can sometimes lead to an over-weighting of the outlier in that class division [3].

Another disadvantage is that if the number of classes is not correctly created two areas with the same value can end up in different groups. For example, imagine you have data for the number of fast food restaurants in each county for 21 counties and you want to divide the counties into 7 groups with 3 counties in each group. If 4 counties each have exactly 10 fast food restaurants one of those counties will be classified in a different group, because there are only 3 counties per group, despite the values being the same. 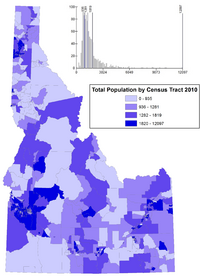