The RGB color model is a physics-oriented model for specifying color based on the intensity of the Additive primary colors (red, green and blue) to produce a wide array of colors. Under the RGB model, "colors are specified based on the intensity of red, green, and blue at each pixel location".[1] These intensities are represented as an 8-bit numeric RGB triplet (r,g,b) value. One of the most common representations of an RGB triplet is an integer value between 0-255 for each color. In the mid-19th century, Thomas Young and Hermann Helmholtz proposed a theory of trichromatic color vision, which became the basis for the RGB color model.[1]

RGB (red, green, and blue) is one of the six models of color used on a map. Under the RGB color model, the primary colors of red, green, and blue form the basis of almost every other color in the visible light spectrum (for example, a combination of red and green results in yellow). This is known as additive mixing.

The RGB color model is defined by three variables, which are expressed as a RGB triplet. There are several ways to quantify a RGB triplet:

A fractional value can be represented as a cube on three axes. This cube uses only non-negative values within a 0-1 range, where the black at the origin (0, 0, 0) and white at the vertex (1, 1, 1). 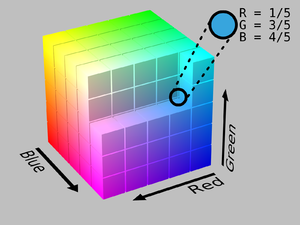 The RGB color model mapped to a cube

Additive models, such as the RGB color model, are the preferred choice when displaying maps on a computer system or digital device. The CMYK color model is a better model when creating a printed map. When RGB is converted to CMYK for printing, some of the color data is lost because CMYK covers less of the visible spectrum. When in doubt it is better to use the RGB color model, thereby supporting a larger portion of the visible spectrum.[3]

In the context of computer cartography the RGB model has had great usage since the colors based on it are compatible with many other forms of digital output devices such as TVs, smartphones and video projectors which can display maps without distorting the colors first specified by the cartographer.