From wiki.gis.com
Jump to: navigation, search
For other uses, see Radius (disambiguation). 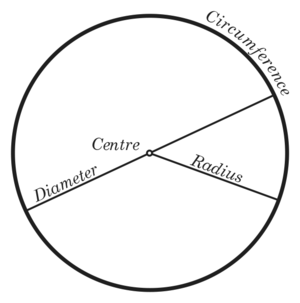 More generally — in geometry, science, engineering, and many other contexts — the radius of something (e.g., a cylinder, a polygon, a mechanical part, a hole, or a galaxy) usually refers to the distance from its center or axis of symmetry to a point in the periphery: usually the point farthest from the center or axis (the outermost or maximum radius), or, sometimes, the closest point (the short or minimum radius).[2] If the object does not have an obvious center, the term may refer to its circumradius, the radius of its circumscribed circle or circumscribed sphere. In either case, the radius may be more than half the diameter (which is usually defined as the maximum distance between any two points of the figure).

In graph theory, the radius of a graph is the minimum over all vertices u of the maximum distance from u to any other vertex of the graph.[4]

The name comes from Latin radius, meaning "ray" but also the spoke of a chariot wheel. The plural in English is radii (as in Latin), but radiuses can be used, though it rarely is.[5]

The radius of the circle with perimeter (circumference) C is

The radius of a circle with area A is

To compute the radius of a circle going through three points P1, P2, P3, the following formula can be used:

where θ is the angle

These formulas assume a regular polygon with n sides.

The radius can be computed from the side s by:

The radius of a d-dimensional hypercube with side s is