Raised relief maps show the land in 3D. They are a great visual aid for gaining understanding of geographic areas
For the depiction of terrain on flat paper maps, see cartographic relief depiction.

A raised-relief map or terrain model is a three-dimensional representation, usually of terrain. When representing terrain, the elevation dimension is usually exaggerated by a factor between five and ten; this facilitates the visual recognition of terrain features. Since the map is in 3-D it can provide an advantage in teaching about topography. A 3-D display of a map can greatly enhance the understanding of a student as they study a contour map.

There are a number of ways to create a raised-relief map. There are benefits and disadvantages to each in regards to accuracy, price, and ease of creation.

The original relief was designed by structures began with the Han dynasty in the first century A.D. The fist construction method began with models made from rice, which then expanded to wood and clay and eventually a variety of sawdusts, pastes and beeswax to allow better versatility. Relief maps were first used in the early Asian Dynasties to provide a visual representation of the empires and their various provinces.

Starting with a topographic map, one can cut out from some sheet material successive layers, with edges following the contour lines on the map. These may be assembled in a stack to obtain a rough approximation of the terrain. This method, without vertical exaggeration, is commonly used as the base for architectural models. For models of landforms, the stack will then be smoothed by filling with some material. This may then be used directly or for greater durability a mold may be made from this. This mold may then be used to produce a plaster model.

By using automated machinery a topographic model is made by cutting a form with a numerically controlled mill guided by interpretation of the data used to produce a topographic map. From there, there are two ways to create a map from the milled material.

First, the map may be printed on a sheet of thermoplastic, which is then heated and drawn over the master. A vacuum is then applied to draw the soft plastic into the shape of the form [1]. Such maps are commonly available in specialty map stores.

The other method used to create maps with a milled model is by using a dense foam for the model, upon which the map data can be printed directly into it. Solid Terrain Modeling is currently one of the leaders in this type of map production. 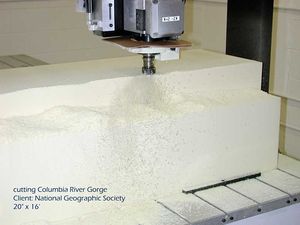 A Map being made at Solid Terrain Modeling.

Solid Terrain Modeling Inc was founded in August 2000, by Lawrence Faulkner and Mark Fisher. Solid Terrain Models (STM) are cut in dense polyurethane foam and have satellite imagery printed on top. Thus, digital elevation data and an image are needed to create an STM. STMs are also known as terrain models or sand tables. Oftentimes, vertical exaggeration is needed to portray elevation changes on terrain models. However, the process that Solid Terrain Modeling uses does not make vertical exaggeration necessary [2]. They depict size and terrain with accuracy allowing the models to be interactive. Below is a picture that shows the fabrication process of STM. 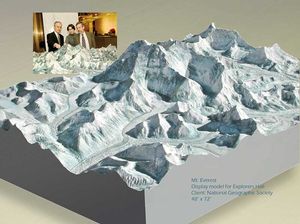 A 3-D rendering of Mt.Everest done by Solid Terrain Modeling.

3D printing is a fast-growing technology that is becoming a viable way to easily create 3D terrain maps. Digital Elevation Models (DEM) are rendered into a 3D computer model, which can then be sent to a 3D printer. Most consumer-level 3D printers extrude plastic layer by layer to create a 3D object. Other higher-end printers use a combination of powders or resins and lasers to create higher-quality models. Color may be added to provide a realistic view in the model. Some benefits of using a 3D printed model is that the information is immediately available, everyone "gets it" right away- scale, distance, terrain, points of view, sight lines, etc. without knowing how to read a topographical map or grading plan [3].

The Vacuum Forming technique, invented in 1947 by the Army Map Service in Washington, D.C., uses vacuum-formed plastic sheets to produce large amounts of terrain models. To make the Vacuum-Formed plastic maps, first a master model made of resin or other materials is created with a computer guided milling machine using a digital terrain model. Then a reproduction mold is cast using the master mold and a heat and pressure resistant material. Fine holes are put into the reproduction mold so that the air can later be removed by a vacuum. A plastic sheet is then applied to the mold so that they are airtight, and a heater is placed above the plastic for about 10 seconds. Then the vacuum is applied to remove the remaining air. After letting the plastic cool, it can be removed and the process is complete.[4] Similar to other terrain maps, vacuum formed maps have various advantages and disadvantages with their functionality. Some advantages that they offer are that they can be produced quickly and be useful during emergencies or for military reasons. However, producing accurate portrayals of regions or areas with rugged and sharp terrain may be difficult without having problems with distortion.

For appropriate mathematical functions and especially for certain types of statistics, a similar model may be constructed as an aid to understanding a function or as an aid to studying the statistical data. The product of such functions may not be cartographic in nature at all.