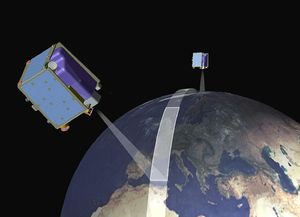 RapidEye AG is a German geospatial information provider focused on assisting in management decision-making through services based on their own Earth observation imagery. The company owns a five satellite constellation producing 5 meter resolution imagery that was designed and implemented by MacDonald Dettwiler (MDA) of Richmond, Canada. Originally located in Munich, the company relocated 60 km southwest of Berlin to Brandenburg an der Havel in 2004.

RapidEye works with the following industries:

Five Identical Satellites: Each of RapidEye's five satellites contain identical sensors, are equally calibrated and travel on the same orbital plane. Therefore, an image from one satellite will be equivalent to an image from any of the other four, allowing for a large amount of imagery to be collected (4 million km² each day) and quick revisit times. The RapidEye satellite system is capable of imaging any point on Earth every day.

Size: The RapidEye satellites are quite small. Each satellite is approximately 1 meter cubed (roughly the size of a dorm refrigerator or a dishwasher). The only other constellation of this size used for remote sensing is the DMC (Disaster Management Constellation), also designed and built by SSTL.

The RapidEye satellite platforms has been constructed by Surrey Satellite Technology Ltd (SSTL). [1] This makes RapidEye the second multiple-satellite imaging constellation that SSTL has been involved with, after building and launching the Disaster Monitoring Constellation.

RapidEye invited the public to name their satellites with a contest in July 2008. The winning names chosen from this contest were : TACHYS (Rapid), MATI (Eye), CHOMA (Earth), CHOROS (Space), TROCHIA (Orbit). All names are Greek in origin.

On August 29, 2008, a DNEPR-1 rocket (a refurbished ICBM missile), was successfully launched from Baikonur in Kazahstan carrying RapidEye's constellation of five Earth observation satellites designed and implemented by MacDonald Dettwiler (MDA) of Richmond, Canada.[2][3][4] Since then, the satellites have been undergoing their initial testing and calibration phase, which will last until approximately the end of 2008.

1996: The RapidEye business concept was designed by Kayser-Threde GmbH, based on a call for ideas from the DLR (German Aerospace Agency), on how to commercialize remote sensing in Germany.

1998: RapidEye was established as an independent company in Munich with seed financing from a few private investors and Vereinigte Hagelversicherung, a German agricultural insurance provider.

2004: Funding was secured for the RapidEye satellite constellation and ground segment with the help of the European Union, the State of Brandenburg (Germany), a banking consortium consisting of Commerzbank, EDC (Export Development Canada) and KfW Banking Group. Through a contract with the CCC (Canadian Commercial Corporation), MacDonald Dettwiler (MDA) was awarded the contract as the prime contractor to build RapidEye's satellite system. RapidEye relocated their business to Brandenburg an der Havel, Germany.

2008: RapidEye earned ISO 9001:2000 certification in April from TÜV Nord The RapidEye constellation of five Earth observation satellites was successfully launched on August 29 from Baikanour, Kazakhstan. After the satellites completed their MPAR phase (consisting of testing and calibration) they became commercially operational in February 2009.

November 27, 2008 release of the image gallery on RapidEye's website.

February 4, 2009 with initial testing complete, the RapidEye satellites are put into commercial operations. [8]