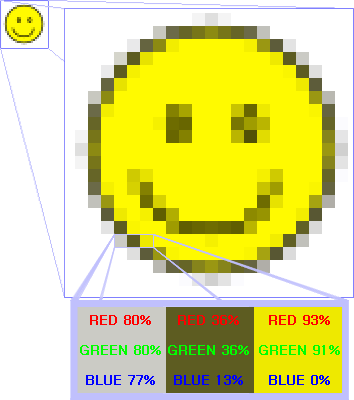 Imagine the smiley face in the top left corner as an RGB bitmap image. When enlarged, it might look like the big smiley face to the right. Every square represents a pixel. Zooming in further, the individual pixels can be analyzed, with their colors constructed by adding the values for red, green and blue.

In computer graphics, a raster graphics image or bitmap is a data structure representing a generally rectangular grid of pixels, or points of color, viewable via a monitor, paper, or other display medium. Raster images are stored in image files with varying formats (see Comparison of graphics file formats).

A bitmap corresponds bit-for-bit with an image displayed on a screen, generally in the same format used for storage in the display's video memory, or maybe as a device-independent bitmap. A bitmap is technically characterized by the width and height of the image in pixels and by the number of bits per pixel (a color depth, which determines the number of colors it can represent).

The printing and prepress industries know raster graphics as contones (from "continuous tones") and refer to vector graphics as "line work".

The word "raster" has its origins in the Latin rastrum (a rake), which is derived from radere (to scrape), and was originally used in the raster scan of cathode ray tubes (CRT), which paint the image line by line; it is used for a grid of pixels by generalization. See also rastrum, a device for drawing musical staff lines.

Raster graphics are resolution dependent. They cannot scale up to an arbitrary resolution without loss of apparent quality. This deficiency contrasts with the capabilities of vector graphics, which easily scale up to the quality of the device rendering them. Raster graphics deal more practically than vector graphics with photographs and photo-realistic images, while vector graphics often serve better for typesetting or for graphic design. Modern computer-monitors typically display about 72 to 130 pixels per inch (PPI), and some modern consumer printers can resolve 2400 dots per inch (DPI) or more; determining the most appropriate image resolution for a given printer-resolution can pose difficulties, since printed output may have a greater level of detail than a viewer can discern on a monitor. Typically, a resolution of 150 to 300 pixel per inch works well for 4-color process (CMYK) printing.

A bitmap or pixmap is pixel data storage structure employed by the majority of raster graphics file formats such as PNG.

OpenRaster is a file format being developed under the auspices of the Create Project to give free software graphics editors a common raster graphics interchange format, that maintains as much of the working information that the applications use.