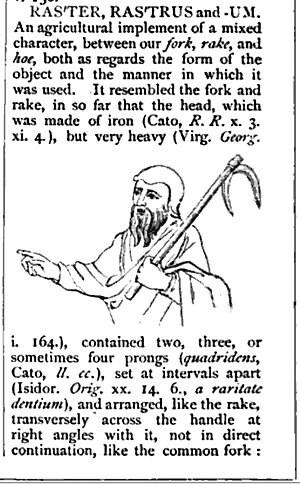 The word raster comes from the Latin word rastrum (a rake), which is derived from radere (to scrape); see also rastrum, an instrument for drawing musical staff lines.

The pattern left by the tines of a rake, when drawn straight, resembles the parallel lines of a raster: this line-by-line scanning is what creates a raster. It's a systematic process of covering the area progressively, one line at a time. Although often a great deal faster, it's similar in the most-general sense to how one's gaze travels when one reads text.

In a raster scan, an image is subdivided into a sequence of (usually horizontal) strips known as 'scan lines'. Each scan line can be transmitted in the form of an analog signal as it is read from the video source, as in television systems, or can be further divided into discrete pixels for processing in a computer system.

This ordering of pixels by rows is known as raster order, or raster scan order.

In raster scanning, the beam sweeps horizontally left-to-right at a steady rate, then blanks and rapidly moves back to the left, where it turns back on and sweeps out the next line. During this time, the vertical position is also steadily increasing, but much more slowly – there is one vertical sweep per image frame, but one horizontal sweep per line of resolution. Thus each scan line is sloped slightly 'downhill' (towards the lower right), with a slope of approximately –one horizontal resolution, while the sweep back is very rapid and almost horizontal.

The tilt in the scan lines is imperceptible – it is tiny to start, and is dwarfed in effect by screen convexity and other modest geometrical imperfections. Even on the rare truly-flat computer monitors such as the Zenith Flat Tension Mask, the effect was too small to see[citation needed].

There is a misconception that once a scan line is complete, a CRT display in effect suddenly jumps internally, by analogy with a typewriter or printer's paper advance or line feed, before creating the next scan line. As discussed above, this does not happen: the vertical sweep continues at a steady rate over a scan line, creating imperceptible tilt. Steady-rate sweep is done, instead of a stairstep of advancing every row, because steps are hard to implement technically, while steady-rate is much easier, and the resulting distortion is imperceptible. In detail, scanning of CRTs is done by magnetic deflection, by changing the voltage. Rapidly changing the deflection (a jump) requires a voltage spike to be applied to the yoke, and the deflection can only react slowly. Electronically, the inductance of the deflection yoke's vertical windings is relatively high, and thus the current in the yoke, and thus the vertical part of the magnetic deflection field, can change only slowly.

In electronics, these (usually steady-rate) movements of the beam[s] are called 'sweeps', and the circuits that create the currents for the deflection yoke (or voltages for the horizontal deflection plates in an oscilloscope) are called the sweep circuits. These follow roughly a sawtooth wave: steady movement across the screen, then rapidly move back to the other side, and likewise for the vertical sweep. This is not exact, both due to bandwidth limits on the circuits (hence undershoot and ringing occur), and due to the sync pulse having non-zero time.

Computer printers create their images basically by raster scanning. Laser printers use a spinning polygonal mirror (or an optical equivalent) to scan across the photosensitive drum, and paper movement provides the other scan axis. Considering typical printer resolution, the 'downhill' effect is minuscule. Inkjet printers have multiple nozzles in their printheads, so many (dozens to hundreds) of 'scan lines' are written together, and paper advance prepares for the next batch of scan lines. However, converting vector-based data into the form required by a display, or printer, requires a raster image processor (RIP).

Computer text is mostly created from font files that describe the outlines of each printable character or symbol (glyph). (A minority are 'bit maps'.) These outlines have to be converted into what are effectively little rasters, one per character, before being rendered (displayed or printed) as text, in effect merging their little rasters into that for the page.

In detail, each line (horizontal frame or HFrame) consists of:

The porches and associated blanking are to provide fall time and settle time for the beam to move back to the left (the voltage to decrease), and for ringing to die down. The vertical frame (VFrame) consists of exactly the same components, but only occurs once per image frame, and the times are considerably longer. The details of these intervals are called the video timing.

See Video timing details revealed for a diagram of these.

These are mostly not visible to end users, but were visible in the case of XFree86 Modelines, where users of XFree86 could (and sometimes needed to) manually adjust these timings, particularly to achieve certain resolutions or refresh rates.

In a cathode-ray-tube (CRT) display, when the electron beams are unblanked, the horizontal deflection component of the magnetic field created by the deflection yoke makes the beams scan 'forward' from left to right at a constant rate. The data for consecutive pixels goes (at the pixel clock rate) to the digital-to-analog converters for each of the three primary colors. (For modern flat-panel displays, however, the pixel data remains digital.)

As the scan line is drawn, at the right edge of the display, all beams are blanked, but the magnetic field continues to increase in magnitude for a short while after blanking.

[To clear up possible confusion: Referring to the magnetic deflection fields, if there were none, all beams would hit the screen near the center. The farther away from the center, the greater the strength of the field needed. Fields of one polarity move the beam up and left, and those of the opposite polarity move it down and right. At some point near the center, the magnetic deflection field is zero. So, therefore, a scan begins as the field decreases. Midway, it passes through zero, and smoothly increases again to complete the scan.]

After one line has been created on the screen and the beams are blanked, the magnetic field reaches its designed maximum. Relative to the time required for a forward scan, it then changes back relatively quickly to what's required to position the beam beyond the left edge of the visible (unblanked) area. This process occurs with all beams blanked, and is called the retrace. At the left edge, the field steadily decreases in magnitude to start another forward scan, and soon after the start, the beams unblank to start a new visible scan line.

Vertical retrace is comparatively slow, occurring over a span of time required for several tens of horizontal scans. (In old analog TVs, typically, setting brightness to maximum made the vertical retrace visible.)

In analog TV, originally it was too costly* to create a simple sequential raster scan of the type just described with a fast-enough refresh rate and sufficient horizontal resolution, although the French 819-line system had better definition than other standards of its time. To obtain a flicker-free display, analog TV used a variant of the scheme in moving-picture film projectors, in which each frame of the film is shown twice or three times. To do that, the shutter closes and opens again to increase the flicker rate, but not the data update rate. *Practical video (similar to digital dot clock) bandwidth, including transmission bandwidth

Raster scans have been used in (naval gun) fire-control radar, although they were typically narrow rectangles. They were used in pairs (for bearing, and for elevation). In each display, one axis was angular offset from the line of sight, and the other, range. Radar returns brightened the video. Search and weather radars have a circular display Plan Position Indicator (PPI) that covers a round screen, but this is not technically a raster. Analog PPIs have sweeps that move outward from the center, and the angle of the sweep matches antenna rotation, up being north, or the bow of the ship.

A set of lines forming a musical staff was formed by a tool known as a rastrum as early as 1833.[1]

The concept of raster scanning was inherent in the original mechanical disc-scanning television patent of Paul Nipkow in 1884.

The term raster was used for a halftone printing screen pattern as early as 1894.[2] Similar terminology was used in German at least from 1897; Eder[3] writes of "die Herstellung von Rasternegativen fur Zwecke der Autotypie" (the production of raster negatives for halftones).

Max Dieckmann and Gustav Glage were the first to produce actual raster images on a cathode-ray tube (CRT); they patented their techniques in Germany in 1906.[4] It has not been determined whether they used the word raster in their patent or other writings.

An early use of the term raster with respect to image scanning via a rotating drum is Arthur Korn's 1907 book which says (in German)[5]: "...als Rasterbild auf Metall in solcher Weise aufgetragen, dass die hellen Töne metallisch rein sind, oder umgekehrt" (...as a raster image laid out on metal in such way that the bright tones are metallically pure, and vice versa). Korn was applying the terminology and techniques of halftone printing, where a 'Rasterbild' was a halftone-screened printing plate.

There were more scanning-relevant uses of Raster by German authors Eichhorn in 1926:[6] "die Tönung der Bildelemente bei diesen Rasterbildern" and "Die Bildpunkte des Rasterbildes" ("the tone of the picture elements of this raster image" and "the picture points of the raster image"); and Schröter in 1932:[7] "Rasterelementen," "Rasterzahl," and "Zellenraster" ("raster elements," "raster count," and "cell raster").

The first use of raster specifically for a television scanning pattern is often credited to Baron Manfred von Ardenne who wrote in 1933:[8] "In einem Vortrag im Januar 1930 konnte durch Vorführungen nachgewiesen werden, daß die Braunsche Röhre hinsichtlich Punktschärfe und Punkthelligkeit zur Herstellung eines präzisen, lichtstarken Rasters laboratoriumsmäßig durchgebildet war" (In a lecture in January 1930 it was proven by demonstrations that the Braun tube was prototyped in the laboratory with point sharpness and point brightness for the production of a precise, bright raster).

Raster was adopted into English television literature at least by 1936, in the title of an article in Electrician.[9]

The mathematical theory of image scanning was developed in detail using Fourier transform techniques in a classic paper by Mertz and Gray of Bell Labs in 1934[10].