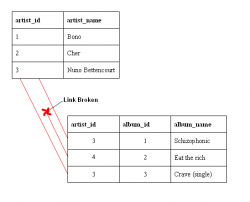 An example of a database that has not enforced referential integrity. In this example, there is a foreign key (artist_id) value in the album table that references a non-existent artist — in other words there is a foreign key value with no corresponding primary key value in the referenced table. What happened here was that there was an artist called "Aerosmith", with an artist_id of "4", which was deleted from the artist table. However, the album "Eat the Rich" referred to this artist. With referential integrity enforced, this would not have been possible.

Referential integrity is a property of data which, when satisfied, requires every value of one attribute (column) of a relation (table) to exist as a value of another attribute in a different (or the same) relation (table).[citation needed]