Remote sensing is the small or large-scale acquisition of information of an object or phenomenon, by the use of either recording or real-time sensing device(s) that are wireless, or not in physical or intimate contact with the object (such as by way of aircraft, spacecraft, satellite, buoy, or ship). In practice, remote sensing is the stand-off collection through the use of a variety of devices for gathering information on a given object or area. Thus, Earth observation or weather satellite collection platforms, ocean and atmospheric observing weather buoy platforms, the monitoring of a parolee via an ultrasound identification system, Magnetic Resonance Imaging (MRI), Positron Emission Tomography (PET), X-radiation (X-RAY) and space probes are all examples of remote sensing. In modern usage, the term generally refers to the use of imaging sensor technologies including: instruments found in aircraft and spacecraft as well as those used in electrophysiology, and is distinct from other imaging-related fields such as medical imaging.

There are two kinds of remote sensing. Passive sensors detect natural radiation that is emitted or reflected by the object or surrounding area being observed. Reflected sunlight is the most common source of radiation measured by passive sensors. Examples of passive remote sensors include film photography, infrared, charge-coupled devices, and radiometers. Active collection, on the other hand, emits energy in order to scan objects and areas whereupon a sensor then detects and measures the radiation that is reflected or backscattered from the target. RADAR is an example of active remote sensing where the time delay between emission and return is measured, establishing the location, height, speed and direction of an object.

Remote sensing makes it possible to collect data on dangerous or inaccessible areas. Remote sensing applications include monitoring deforestation in areas such as the Amazon Basin, the effects of climate change on glaciers and Arctic and Antarctic regions, and depth sounding of coastal and ocean depths. Military collection during the cold war made use of stand-off collection of data about dangerous border areas. Remote sensing also replaces costly and slow data collection on the ground, ensuring in the process that areas or objects are not disturbed.

Orbital platforms collect and transmit data from different parts of the electromagnetic spectrum, which in conjunction with larger scale aerial or ground-based sensing and analysis, provides researchers with enough information to monitor trends such as the El Niño-Southern Oscillation (ENSO) and other natural long and short term phenomena. Other uses include different areas of the earth sciences such as natural resource management, agricultural fields such as land usage and conservation, and national security and overhead, ground-based and stand-off collection on border areas.[1]

The basis for multi-spectral collection and analysis is that of examined areas or objects that reflect or emit radiation that stand out from surrounding areas.

To coordinate a series of large-scale observations, most sensing systems depend on the following: platform location, what time it is, and the rotation and orientation of the sensor. High-end instruments now often use positional information from satellite navigation systems. The rotation and orientation is often provided within a degree or two with electronic compasses. Compasses can measure not just azimuth (i.e. degrees to magnetic north), but also altitude (degrees above the horizon), since the magnetic field curves into the Earth at different angles at different latitudes. More exact orientations require gyroscopic-aided orientation, periodically realigned by different methods including navigation from stars or known benchmarks.

Resolution impacts collection and is best explained with the following relationship: less resolution=less detail & larger coverage, More resolution=more detail, less coverage. The skilled management of collection results in cost-effective collection and avoid situations such as the use of multiple high resolution data which tends to clog transmission and storage infrastructure.

Generally speaking, remote sensing works on the principle of the inverse problem. While the object or phenomenon of interest (the state) may not be directly measured, there exists some other variable that can be detected and measured (the observation), which may be related to the object of interest through the use of a data-derived computer model. The common analogy given to describe this is trying to determine the type of animal from its footprints. For example, while it is impossible to directly measure temperatures in the upper atmosphere, it is possible to measure the spectral emissions from a known chemical species (such as carbon dioxide) in that region. The frequency of the emission may then be related to the temperature in that region via various thermodynamic relations.

The quality of remote sensing data consists of its spatial, spectral, radiometric and temporal resolutions.

Spatial resolution
The size of a pixel that is recorded in a raster image - typically pixels may correspond to square areas ranging in side length from Template:Convert/to.
Spectral resolution
The number of different frequency bands recorded - usually, this is equivalent to the number of sensors carried by the platform(s). Current Landsat collection is that of seven bands, including several in the infra-red spectrum. The MODIS satellites are the highest resolving at 31 bands.
Radiometric resolution
The number of different intensities of radiation the sensor is able to distinguish. Typically, this ranges from 8 to 14 bits, corresponding to 256 levels of the gray scale and up to 16,384 intensities or "shades" of colour, in each band.
Temporal resolution
The frequency of flyovers by the satellite or plane, and is only relevant in time-series studies or those requiring an averaged or mosaic image as in deforesting monitoring. This was first used by the intelligence community where repeated coverage revealed changes in infrastructure, the deployment of units or the modification/introduction of equipment . Cloud cover over a given area or object makes it necessary to repeat the collection of said location.

In order to create sensor-based maps, most remote sensing systems expect to extrapolate sensor data in relation to a reference point including distances between known points on the ground. This depends on the type of sensor used. For example, in conventional photographs, distances are accurate in the center of the image, with the distortion of measurements increasing the farther you get from the center. Another factor is that of the platen against which the film is pressed can cause severe errors when photographs are used to measure ground distances. The step in which this problem is resolved is called georeferencing, and involves computer-aided matching up of points in the image (typically 30 or more points per image) which is extrapolated with the use of an established benchmark, "warping" the image to produce accurate spatial data. As of the early 1990s, most satellite images are sold fully georeferenced.

In addition, images may need to be radiometrically and atmospherically corrected.

Radiometric correction
gives a scale to the pixel values, e.g. the monochromatic scale of 0 to 255 will be converted to actual radiance values.
Atmospheric correction
eliminates atmospheric haze by rescaling each frequency band so that its minimum value (usually realised in water bodies) corresponds to a pixel value of 0. The digitizing of data also make possible to manipulate the data by changing gray-scale values.

Interpretation is the critical process of making sense of the data. The first application was that of aerial photographic collection which used the following process; spatial measurement through the use of a light table in both conventional single or stereographic coverage, added skills such as the use of photogrammetry, the use of photomosaics, repeat coverage, Making use of objects' known dimensions in order to detect modifications. Image Analysis is the recently developed automated computer-aided application which is in increasing use.

Object-Based Image Analysis (OBIA) is a sub-discipline of GIScience devoted to partitioning remote sensing (RS) imagery into meaningful image-objects, and assessing their characteristics through spatial, spectral and temporal scale.

Old data from remote sensing is often valuable because it may provide the only long-term data for a large extent of geography. At the same time, the data is often complex to interpret, and bulky to store. Modern systems tend to store the data digitally, often with lossless compression. The difficulty with this approach is that the data is fragile, the format may be archaic, and the data may be easy to falsify. One of the best systems for archiving data series is as computer-generated machine-readable ultrafiche, usually in typefonts such as OCR-B, or as digitized half-tone images. Ultrafiches survive well in standard libraries, with lifetimes of several centuries. They can be created, copied, filed and retrieved by automated systems. They are about as compact as archival magnetic media, and yet can be read by human beings with minimal, standardized equipment. 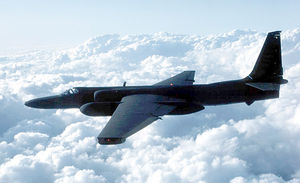 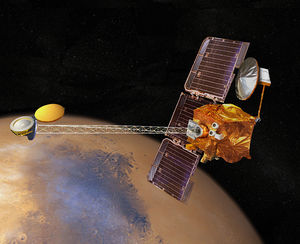 The 2001 Mars Odyssey used spectrometers and imagers to hunt for evidence of past or present water and volcanic activity on Mars.

Beyond the primitive methods of remote sensing our earliest ancestors used (ex.: standing on a high cliff or tree to view the landscape), the modern discipline arose with the development of flight. The balloonist G. Tournachon (alias Nadar) made photographs of Paris from his balloon in 1858. Messenger pigeons, kites, rockets and unmanned balloons were also used for early images. With the exception of balloons, these first, individual images were not particularly useful for map making or for scientific purposes.

Systematic aerial photography was developed for military surveillance and reconnaissance purposes beginning in World War I and reaching a climax during the Cold War with the use of modified combat aircraft such as the P-51, P-38, RB-66 and the F4-C, or specifically designed collection platforms such as the U2/TR-1, SR-71, A-5 and the OV-1 series both in overhead and stand-off collection. A more recent development is that of increasingly smaller sensor pods such as those used by law enforcement and the military, in both manned and unmanned platforms. The advantage of this approach is that this requires minimal modification to a given airframe. Later imaging technologies would include Infra-red, conventional, Doppler and synthetic aperture radar.

The development of artificial satellites in the latter half of the 20th century allowed remote sensing to progress to a global scale as of the end of the cold war. Instrumentation aboard various Earth observing and weather satellites such as Landsat, the Nimbus and more recent missions such as RADARSAT and UARS provided global measurements of various data for civil, research, and military purposes. Space probes to other planets have also provided the opportunity to conduct remote sensing studies in extraterrestrial environments, synthetic aperture radar aboard the Magellan spacecraft provided detailed topographic maps of Venus, while instruments aboard SOHO allowed studies to be performed on the Sun and the solar wind, just to name a few examples.

Recent developments include, beginning in the 1960s and 1970s with the development of image processing of satellite imagery. Several research groups in the "Silicon Valley" area of California including NASA Ames Research Center, GTE and ESL Inc. developed Fourier transform techniques leading to the first notable enhancement of imagery data.

The introduction of online web services for easy access to remote sensing data in the 21st century (mainly low/medium-resolution images), like Google Earth, has made remote sensing more familiar to the big public and has popularized the science.