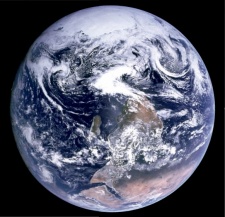 The famous photo of Earth from Apollo 17 (Blue Marble) originally had the south pole at the top, as in this view, with the island of Madagascar visible just left of center, and the continent of Africa at its right. However, the image was turned upside-down to fit the traditional view.[1]

A reversed map, also known as an Upside-Down map or South-Up map, is a world map that generally shows the Southern Hemisphere at the top of the map instead of the bottom. Indonesia is placed in the center while Europe and the Americas are placed to the sides, although there are reversed maps centered on the Prime Meridian[2].

These maps are just as accurate as traditionally-oriented maps, because the position of North at the top of maps is arbitrary. There are many maps with non-standard orientation, such as Medieval maps, polar maps, and Dymaxion maps. The convention that North is at the top (and East at the right) on most modern maps was established by the astronomer Ptolemy[3] and was widely adopted by other cartographers.