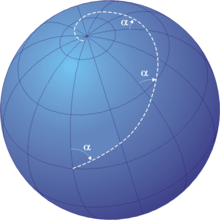 Image of a loxodrome, or rhumb-line, spiraling towards the North Pole

In navigation, a rhumb line (or loxodrome) is a line crossing all meridians of longitude at the same angle, i.e. a straight line path derived from a defined initial bearing. That is, upon taking an initial bearing, one proceeds along the line defined by it, and continues this line without changing one's true (not magnetic) direction.

Old maps do not have grids composed of lines of latitude and longitude but instead have rhumb lines which are oriented directly towards North, at a right angle from the North, or at some angle from the North which is some simple rational fraction of a right angle. These rhumb lines would be drawn so that they would converge at certain points of the map: lines going in every direction would converge at each of these points. See compass rose.

The radial oriented lines on a compass rose are also called rhumbs. The expression "sailing on a rhumb" was used in the 16th–19th centuries to indicate a particular compass heading.[1]

The 1878 edition of The Globe Encyclopaedia of Universal Information describes loxodrome lines as:[3]

Loxodrom'ic Line is a curve which cuts every member of a system of lines of curvature of a given surface at the same angle. A ship sailing towards the same point of the compass describes such a line which cuts all the meridians at the same angle. In Mercator's Projection (q.v.) the Loxodromic lines are evidently straight.[3]

The name is derived from Old French: "rumb", a line on the chart which intersects all meridians at the same oblique angle.[1] On a plane surface this would be the shortest distance between two points over short distances, where the curvature of the earth is not a major factor, and thus can be used for plotting a vehicle, aircraft or ship's course.[1] Over longer distances great circle routes provides the shortest routes. However the inconvenience of having to continuously change bearings while travelling a great circle route makes rhumb line navigation appealing in certain instances.[1]

Unlike a great circle route (for which the bearing of travel is not constant), following a rhumb line requires turning the vehicle more and more sharply while approaching the poles. The effect of following a rhumb line course on the surface of a globe was first discussed by the Portuguese mathematician Pedro Nunes in 1537, in his Treatise in Defense of the Marine Chart, with further mathematical development by Thomas Harriot in the 1590s.

All rhumb lines spiral from one pole to the other. Near the poles, they are close to being logarithmic spirals (on a stereographic projection they are exactly, see below), so they wind round each pole an infinite number of times but reach the pole in a finite distance. The pole-to-pole length of a rhumb line is (assuming a perfect sphere) the length of the meridian divided by the cosine of the bearing away from true north. Rhumb lines are not defined at the poles.

On a Mercator projection map, a loxodrome is a straight line; beyond the right edge of the map it continues on the left with the same slope. The full loxodrome on a full infinitely high map would consist of infinitely many line segments between these two edges.

Meridians of longitude and parallels of latitude provide special cases of the rhumb line, where their angles of intersection are respectively 0° and 90°. Rhumb lines which cut meridians at oblique angles are loxodromic curves which spiral towards the poles.[1]

On a stereographic projection map, a loxodrome is an equiangular spiral whose center is the North (or South) Pole.

be the longitude where the loxodrome passes the equator. Let

being the slope. For a point with latitude

the position in the Mercator projection can be expressed as

Then the latitude of the point will be

Using cartesian X-Y-Z coordinates, this can be simplified to

Finding the loxodromes between two given points can be done graphically on a Mercator map, or by solving a nonlinear system of two equations in the two unknowns tan(α) and λ0. There are infinitely many solutions; the shortest one is that which covers the actual longitude difference, i.e. does not make extra revolutions, and does not go "the wrong way around".

The distance between two points, measured along a loxodrome, is simply the absolute value of the secant of the bearing (azimuth) times the north-south distance (except for circles of latitude).