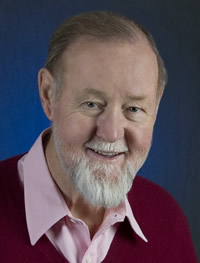 "Geography really matters in human decision making. Geography is a set of fundamental skills we must embed in our young people." - Dr. Roger F. Tomlinson

Roger F. Tomlinson, GISP, CM, (17 November 1933 – 9 February 2014) was an English geographer and the primary originator of modern computerized geographic information systems (GIS), and has been acknowledged as the "father of GIS".[1]

Dr. Tomlinson was born in Cambridge, England. Before attending university, he served in the Royal Air Force from 1951-54 as a pilot and flying officer. He also led two expeditions to the Norwegian Ice Cap in 1956 and 1957.[2]

After his military service, Tomlinson attended the University of Nottingham and Acadia University for two separate undergraduate degrees in geography and geology, respectively.[3] He received a master's degree in geography from McGill University, where he specialized in the glacial geomorphology of Labrador. His doctoral thesis at University College London was titled The application of electronic computing methods and techniques to the storage, compilation, and assessment of mapped data.

Dr. Tomlinson's early career included serving as an assistant professor at Acadia, working as the manager of the computer mapping division at Spartan Air Services in Ottawa, Ontario (following his studies at McGill), and work with the government of Canada first as a consultant and later as a director of regional planning systems with the Department of Forestry and Rural Development.

It was during his tenure with the federal government in the 1960s that Dr. Tomlinson initiated, planned and directed the development of the Canada Geographic Information System, the first computerized GIS in the world.

From the 1970s to his death, Dr. Tomlinson worked in geographic consulting and research for a variety of private sector, government and non-profit organizations, largely through his Ottawa-based company, Tomlinson Associates Ltd., which has branches with consulting geographers in Canada, the United States, and Australia.

Over the course of his distinguished career, Dr. Roger Tomlison has received a number of awards and recognitions for his contributions to the fields of geography and GIS.