A Romer or Roamer is a device for plotting a grid reference on a map. Made from transparent plastic, they are also found on most baseplate compasses. Essentially, it is a specially marked-out ruler which matches the scale of the map in use. The scales are laid out in reverse, such that by lining up the numbers given in the grid reference with the gridlines for the square in question, the corner of the romer lies on the referenced spot. Some have a small hole at this point, which allows the location to be marked with a pencil. They are used in most types of land navigation, from car rallying to orienteering.

They describe only an approximate location. The larger the scale on the map, the less accurate the romer reading. On 1:25,000 scale maps, such as the Ordnance Survey Explorer Series, a 6 figure grid reference gives an area of 10,000m2. This is larger than a football pitch. A more popular and accurate device is a Grid Reference Tool.

The illustration below shows how the romer is used. Here, we are plotting the reference 696018. The marks corresponding to (6, 8) on the romer are lined up along the gridlines (69, 01). The hole in the corner yields the exact point, the church at Little Plumpton. 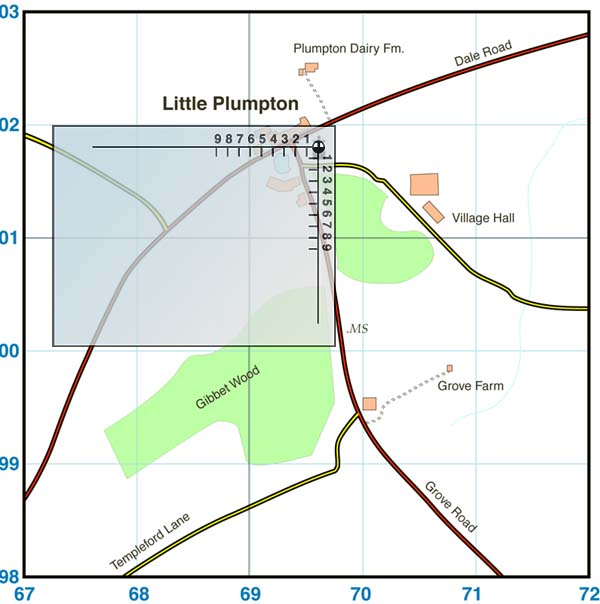