From wiki.gis.com
Jump to: navigation, search
For the axiom of set theory, see Axiom schema of separation.

The precise meanings of the terms associated with the separation axioms has varied over time, as explained in History of the separation axioms. Especially when reading older literature, be sure to get the authors' definition of each condition mentioned to make sure that you know exactly what they mean.

Before we define the separation axioms themselves, we give concrete meaning to the concept of separated sets (and points) in topological spaces. (But separated sets are not the same as separated spaces, defined in the next section.)

For more on these conditions (including their use outside the separation axioms), see the articles Separated sets and Topological distinguishability.

Many of these names have alternative meanings in some of mathematical literature, as explained on History of the separation axioms; for example, the meanings of "normal" and "T4" are sometimes interchanged, similarly "regular" and "T3", etc. Many of the concepts also have several names; however, the one listed first is always least likely to be ambiguous.

Most of these axioms have alternative definitions with the same meaning; the definitions given here are those which fall into a consistent pattern relating the various notions of separation defined in the previous section. Other possible definitions can be found in the individual articles.

In all of the following definitions, X is again a topological space, and all functions are supposed to be continuous.

Relationships between the axioms

The T0 axiom is special in that it can not only be added to a property (so that completely regular plus T0 is Tychonoff) but also subtracted from a property (so that Hausdorff minus T0 is R1), in a fairly precise sense; see Kolmogorov quotient for more information. When applied to the separation axioms, this leads to the relationships in the table below:

Other than the inclusion or exclusion of T0, the relationships between the separation axioms are indicated in the following diagram: 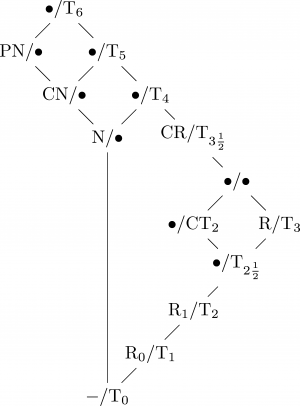 In this diagram, the non-T0 version of a condition is on the left side of the slash, and the T0 version is on the right side. Letters are used for abbreviation as follows: "P" = "perfectly", "C" = "completely", "N" = "normal", and "R" (without a subscript) = "regular". A bullet indicates that there is no special name for a space at that spot. The dash at the bottom indicates no condition.

As you can see from the diagram, normal and R0 together imply a host of other properties, since combining the two properties leads you to follow a path through the many nodes on the rightside branch. Since regularity is the most well known of these, spaces that are both normal and R0 are typically called "normal regular spaces". In a somewhat similar fashion, spaces that are both normal and T1 are often called "normal Hausdorff spaces" by people that wish to avoid the ambiguous "T" notation. These conventions can be generalised to other regular spaces and Hausdorff spaces.

There are some other conditions on topological spaces that are sometimes classified with the separation axioms, but these don't fit in with the usual separation axioms as completely. Other than their definitions, they aren't discussed here; see their individual articles.