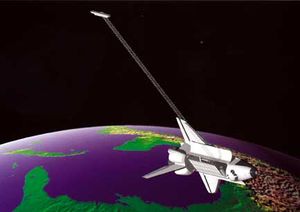 The SRTM was flown on an 11-day mission of the Space Shuttle Endeavour in February of 2000.[1]

The Shuttle Radar Topography Mission (SRTM) is an international research effort that obtained digital elevation models on a near-global scale from 56 °S to 60 °N,[2] to generate the most complete high-resolution digital topographic database of Earth to date.[citation needed] SRTM consisted of a specially modified radar system that flew on board the Space Shuttle Endeavour during the 11-day STS-99 mission in February 2000, based on the older Spaceborne Imaging Radar-C/X-band Synthetic Aperture Radar (SIR-C/X-SAR), previously used on the Shuttle in 1994. To acquire topographic (elevation) data, the SRTM payload was outfitted with two radar antennas.[2] One antenna was located in the Shuttle's payload bay, the other – a critical change from the SIR-C/X-SAR, allowing single-pass interferometry – on the end of a 60-meter (200-foot) mast[2] that extended from the payload bay once the Shuttle was in space. The technique employed is known as Interferometric Synthetic Aperture Radar.

The elevation models are arranged into tiles, each covering one degree of latitude and one degree of longitude, named according to their south western corners. It follows that "n45e006" stretches from 45°N 6°E to 46°N 7°E and "s45w006" from 45°S 6°W to 44°S 5°W. The resolution of the cells of the source data is one arc second, but 1" (approx. 30 meter) data have only been released over United States territory; for the rest of the world, only three arc second data (approx. 90 meter) are available. [3] Each one arc second tile has 3,601 rows, each consisting of 3,601 16 bit bigendian cells. The dimensions of the three arc second tiles are 1201 x 1201.

The elevation models derived from the SRTM data are used in Geographic Information Systems. They can be downloaded freely over the Internet, and their file format (.hgt) is supported by several software developments.

The elevation datasets are affected by mountain and desert no-data areas. These amount to no more than 0.2% of the total area surveyed, but can be a problem in areas of very high relief. They affect all summits over 8,000 metres, most summits over 7,000 metres, many Alpine and similar summits and ridges, and many gorges and canyons. There are some SRTM data sources which have filled these data voids, but some of these have used only interpolation from surrounding data, and may therefore be very inaccurate. If the voids are large, or completely cover summit or ridge areas, no interpolation algorithms will give satisfactory results. Other developers, including NASA World Wind and Google Earth, have improved their results by using 30 arc second data in the interpolation process, but, due to the poor resolution of these data, and very poor quality of some of them, they have further improved their earth viewing services by adding data from other sources. Readers with Google Earth software can examine an example of the most recent results by clicking on 27°59′14″N 86°55′31″E﻿ / ﻿27.98722°N 86.92528°E﻿ / 27.98722; 86.92528﻿ (Mount Everest) (Mount Everest) and tilting the image.

Groups of scientists have worked on algorithms to fill the voids of the original SRTM data. Two datasets offer global coverage void-filled SRTM data at full resolution: the CGIAR-CSI versions and the USGS HydroSHEDS dataset. The CGIAR-CSI version 4 provides the best global coverage full resolution SRTM dataset. The HydroSHEDS dataset was generated for hydrological applications and is suitable for consistent drainage and water flow information. References are provided on the algorithms used and quality assessment. The void-filled SRTM data from Viewfinder Panoramas are high quality at full SRTM resolution, but coverage is limited to areas of high mountain void incidence, and some areas north of 60 degrees of latitude.