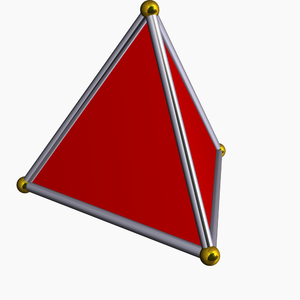 A 3-simplex or tetrahedron

In geometry, a simplex (plural simplexes or simplices) or n-simplex is an n-dimensional analogue of a triangle. Specifically, a simplex is the convex hull of a set of (n + 1) affinely independent points in some Euclidean space of dimension n or higher (i.e., a set of points such that no m-plane contains more than (m + 1) of them; such points are said to be in general position).

A regular simplex is a simplex that is also a regular polytope. A regular n-simplex may be constructed from a regular (n − 1)-simplex by connecting a new vertex to all original vertices by the common edge length.

In geometric or arithmetic combinatorics, a simplex is simply the n-dimensional point set composed of n+1 points.

The convex hull of any nonempty subset of the n+1 points that define an n-simplex is called a face of the simplex. Faces are simplices themselves. In particular, the convex hull of a subset of size m+1 (of the n+1 defining points) is an m-simplex, called an m-face of the n-simplex. The 0-faces (i.e., the defining points themselves as sets of size 1) are called the vertices (singular: vertex), the 1-faces are called the edges, the (n − 1)-faces are called the facets, and the sole n-face is the whole n-simplex itself. In general, the number of m-faces is equal to the binomial coefficient

. Consequently, the number of m-faces of an n-simplex may be found in column (m + 1) of row (n + 1) of Pascal's triangle. A simplex A is a coface of a simplex B if B is a face of A. Face and facet can have different meanings when describing types of simplices in a simplicial complex. See Simplicial_complex#Definitions

In some conventions, the empty set is defined to be a (−1)-simplex. The definition of the simplex above still makes sense if n = −1. This convention is more common in applications to algebraic topology (such as simplicial homology) than to the study of polytopes. 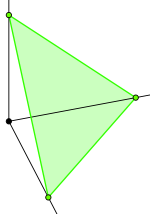 The standard 2-simplex in R3

The simplex Δn lies in the affine hyperplane obtained by removing the restriction ti ≥ 0 in the above definition. The standard simplex is clearly regular.

The n+1 vertices of the standard n-simplex are the points {ei} ⊂ Rn+1, where:

There is a canonical map from the standard n-simplex to an arbitrary n-simplex with vertices (v0, …, vn) given by

A numerical procedure for the Cartesian coordinates of a regular N-dimensional simplex can be obtained by utilizing the following two geometric properties,

represent the vectors from the center of the simplex to each of its vertices. According to property 1, the vector lengths can be arbitrarily chosen to be some fixed number. We take

, taking the origin as the center of the simplex.

Property 2 then implies that the dot product between any two

These two conditions allow a simple enumeration scheme for the Cartesian coordinates of a regular N-dimensional simplex. For convenience, the simplex is centered at the origin.

In three-dimensions, we have to specify

, the vertices of a tetrahedron.

The above procedure is implemented in the following Matlab code, which returns the N+1 vertices of the regular simplex as row vectors in the rows of matrix v.

The oriented volume of an n-simplex in n-dimensional space with vertices (v0, ..., vn) is

where each column of the n × n determinant is the difference between the vectors representing two vertices. Without the 1/n! it is the formula for the volume of an n-parallelepiped. One way to understand the 1/n! factor is as follows. If the coordinates of a point in a unit n-box are sorted, together with 0 and 1, and successive differences are taken, then since the results add to one, the result is a point in an n simplex spanned by the origin and the closest n vertices of the box. The taking of differences was a unimodular (volume-preserving) transformation, but sorting compressed the space by a factor of n!.

The volume under a standard n-simplex (i.e. between the origin and the simplex in Rn+1) is

as can be seen by multiplying the previous formula by xn+1, to get the volume under the n-simplex as a function of its vertex distance x from the origin, differentiating with respect to x, at

(where the n-simplex side length is 1), and normalizing by the length

, along the normal vector.

Simplexes with an "orthogonal corner"

Orthogonal corner means here, that there is a vertex at which all adjacent hyperfaces are pairwise orthogonal. Such simplexes are generalizations of right angle triangles and for them there exists a n-dimensional version of the Pythagorean theorem:

, which is the hyperface opposite of the orthogonal corner.

For a 2-simplex the theorem is the Pythagorean theorem for triangles with a right angle and for a 3-simplex it is de Gua's theorem for a tetrahedron with a cube corner.

The Hasse diagram of the face lattice of an n-simplex is isomorphic to the graph of the (n+1)-hypercube's edges, with the hypercube's vertices mapping to each of the n-simplex's elements, including the entire simplex and the null polytope as the extreme points of the lattice (mapped to two opposite vertices on the hypercube). This fact may be used to efficiently enumerate the simplex's face lattice, since more general face lattice enumeration algorithms are more computationally expensive.

The n-simplex is also the vertex figure of the (n+1)-hypercube.

Topologically, an n-simplex is equivalent to an n-ball. Every n-simplex is an n-dimensional manifold with boundary.

In probability theory, the points of the standard n-simplex in

-space are the space of possible parameters (probabilities) of the categorical distribution on n+1 possible outcomes.

A finite set of k-simplexes embedded in an open subset of Rn is called an affine k-chain. The simplexes in a chain need not be unique; they may occur with multiplicity. Rather than using standard set notation to denote an affine chain, it is instead the standard practice to use plus signs to separate each member in the set. If some of the simplexes have the opposite orientation, these are prefixed by a minus sign. If some of the simplexes occur in the set more than once, these are prefixed with an integer count. Thus, an affine chain takes the symbolic form of a sum with integer coefficients.

denoting the vertices, then the boundary

of σ is the chain

More generally, a simplex (and a chain) can be embedded into a manifold by means of smooth, differentiable map

. In this case, both the summation convention for denoting the set, and the boundary operation commute with the embedding. That is,

are the integers denoting orientation and multiplicity. For the boundary operator

to a topological space X is frequently referred to as a singular n-simplex.

Simplices are used in plotting quantities that sum to 1, such as proportions of subpopulations, as in a ternary plot.

Simplices are used in Operations Research for solving problems involving multiple constraints expressed as linear equations. An example is designing a balanced diet which has some amount of calories from each of carbohydrates, proteins and fats. The method for solving problems of this sort using simplices is called the simplex method.

The first method is based on the fact that sampling from the K-dimensional unit simplex is equivalent to sampling from a Dirichlet distribution with parameters α = (α1, ..., αK) all equal to one. The exact procedure would be as follows:

The second method to generate a random point on the unit simplex is based on the order statistics of the uniform distribution on the unit interval (see Devroye, p.568). The algorithm is as follows:

[WARNING: This may be broken according to http://www.cs.cmu.edu/~nasmith/papers/smith+tromble.tr04.pdf ]

An efficient algorithm to do the walk can be derived from the fact that the normalized sum of K unit-exponential random variables is distributed uniformly over the simplex. We begin by defining a univariate function that "walks" a given sample over the positive real line such that the stationary distribution of its samples is the unit-exponential distribution. The function makes use of the Metropolis-Hastings algorithm to sample the new point given the old point. Such a function can be written as the following, where h is the relative step-size:

Then to perform a random walk over the simplex:

The set of ti will be restricted to the simplex, and will walk ergodically over the domain with a uniform stationary density. Note that it is important not to re-normalize the xi at each step; doing so will result in a non-uniform stationary distribution. Instead, think of the xi as "hidden" parameters, with the simplex coordinates given by the set of ti.

This procedure effectively samples x_new from a gamma random variable with mean of x_old and standard deviation of h*x_old. If library routines are available to generate the requisite gamma variate directly, they may be used instead. The Hastings ratio for the MCMC step (which is different and independent of the Hastings-ratio in the next_point function) can then be computed given the gamma density function. Although it is theoretically possible to sample from a gamma density directly, experience shows that doing so is numerically unstable. In contrast, the next_point function is numerically stable even after many, many iterations.