From wiki.gis.com
Jump to: navigation, search
For other uses, see The Spirit Level (disambiguation).

A spirit level or bubble level is an instrument designed to indicate whether a surface is level or plumb. Different types of spirit levels are used by carpenters, stone masons, bricklayers, other building trades workers, surveyors, millwrights and other metalworkers, and serious videographers.

Original spirit levels had two banana-shaped curved glass vials at each viewing point and were much more complicated to use. In the 1920s, Henry Ziemann, the founder of Empire Level, invented the modern level with a single vial. These vials, common on most ordinary levels today, feature a slightly curved glass tube which is incompletely filled with a liquid, usually a yellow-colored 'spirit' (a synonym for ethanol), leaving a bubble in the tube. A spirit such as Ethanol is used due to its very low viscosity. This provides an ideal element for a bubble to travel the tube quickly and settle accurately with minimal interference generated from surface tension between the transfer fluid and the glass housing. Most commonly, spirit levels are employed to indicate how horizontal (level) or how vertical (plumb) a surface is.

Some are also capable of indicating the level of a surface between horizontal and vertical to the nearest degree. The crudest form of the spirit level is the bull's eye level: a circular flat-bottomed device with the liquid under a slightly convex glass face which indicates the center clearly. It serves to level a surface in two perpendicular directions, while the tubular level only does so in the direction of the tube. The most sophisticated spirit levels are guaranteed accurate to five-ten-thousandth of an inch (.0005) per inch and are much easier to read because of their blue colour. Where a spirit level must also be usable upside-down, the banana-shaped tube is replaced by a barrel-shaped tube. The upper internal surface of the tube is thus always of the appropriate shape.

There are different types of spirit levels for different uses:

A spirit level is also usually found on the head of combination squares.

Tilting level, dumpy level or automatic level [1] are terms used to refer to types of leveling instruments as used in surveying to measure height differences over larger distances. It consists of a spirit level in the above sense, mounted on a telescope containing cross-hairs, itself mounted on a tripod. The observer reads height values off two staffs, one 'behind' and one 'in front', to obtain the height difference between the ground points on which the staffs are resting. Starting from a point with a known (absolute) elevation, by repeating 'behind', 'front' and intermediate 'front' readings, (relative) height differences can be measured cumulatively over large distances and elevations can be calculated of intermediate points. 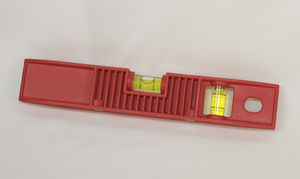 A traditional carpenter's spirit level looks like a short plank of wood and often has a wide body to ensure both stability, and that the surface is being measured correctly. Embedded in the middle of the spirit level is a small window where the bubble and the tube is mounted. Two notches (or rings) designate where the bubble should be if the surface was level. Often an indicator for a 45 degree inclination is included.

An engineer's precision level permits leveling items to a greater degree of accuracy than a plain spirit level. They are used to level the foundations, or beds of machines to ensure the machine can output workpieces to the accuracy prebuilt in the machine.

The spirit level was invented by Melchisedech Thevenot (born in either 1620 or 1621; died 1692). Thevenot was an amateur scientist and patron of many scientists and mathematicians. He was wealthy and well-connected, later becoming the Royal Librarian to King Louis XIV of France. Thevenot invented the instrument some time before February 2, 1661. This date can be very accurately established from Thevenot's correspondence with scientist Christiaan Huygens. Within a year of this date the inventor circulated details of his invention to others, including Robert Hooke in London and Vincenzo Viviani in Florence. It is occasionally argued that these bubble levels did not come into widespread use until the beginning of the eighteenth century, the earliest surviving examples being from that time, but Adrien Auzout had recommended that the Académie Royale des Sciences take "levels of the Thevenot type" on its expedition to Madagascar in 1666. It is very likely that these levels were in use in France and elsewhere long before the turn of the century.

Thevenot is often confused with his nephew, the traveler Jean de Thevenot (born 1633; died 1667). There is evidence to suggest that both Huygens and Hooke later laid claim to the invention, although only within their own countries.

In the 1920s, Henry Ziemann the founder of Empire Level, invented the modern level with a single vial.