Role of Statistics in Geography

Geographers use statistics in numerous ways:[3]

Performing analysis in GIS naturally evokes an element of science, particularly the analysis step of the scientific process. The results generated from analysis within a GIS are not significant or valid simply because the tools used yielded a result. The results must have statistical tests/analysis performed on them in order to confirm mathematically that they are actually significant, or that they actually mean something. Below are typical methods used by geographers to confirm the significance of their analysis. More information about inferential statistics and hypothesis testing can be found elsewhere on wiki.

Type I and Type II Errors 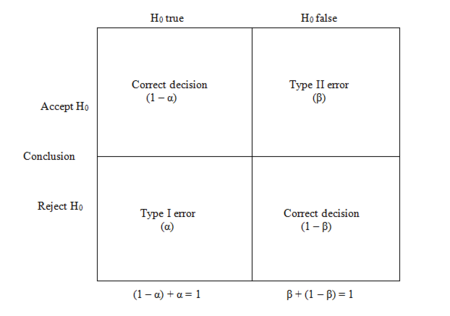 There are two types of errors that occur in statistical testing: Type I and Type II. Type I error results from falsely rejecting the tested null hypothesis. Type II error results from falsely accepting the tested hypothesis. [6] There are always errors in the results of statistical tests due simply to the nature of the testing.[7] These errors can be minimized by increasing the sample size.