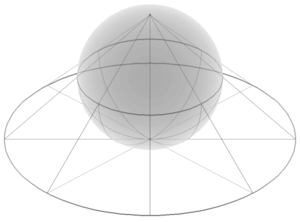 In geometry, the stereographic projection is a particular mapping (function) that projects a sphere onto a plane. The projection is defined on the entire sphere, except at one point — the projection point. Where it is defined, the mapping is smooth and bijective. It is conformal, meaning that it preserves angles. It is neither an isometry nor area-preserving: that is, it preserves neither distances nor the areas of figures.

Intuitively, then, the stereographic projection is a way of picturing the sphere as the plane, with some inevitable compromises. Because the sphere and the plane appear in many areas of mathematics and its applications, so does the stereographic projection; it finds use in diverse fields including complex analysis, cartography, geology, and photography. In practice, the projection is carried out by computer or by hand using a special kind of graph paper called a stereonet or Wulff net. 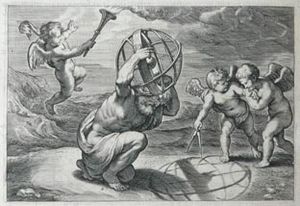 Illustration by Rubens for "Opticorum libri sex philosophis juxta ac mathematicis utiles", by François d'Aiguillon. It demonstrates how the projection is computed.

The stereographic projection was known to Hipparchus, Ptolemy and probably earlier to the Egyptians. It was originally known as the planisphere projection.[1] Planisphaerium by Ptolemy is the oldest surviving document that describes it. One of its most important uses was the representation of celestial charts.[1] The term planisphere is still used to refer to such charts. 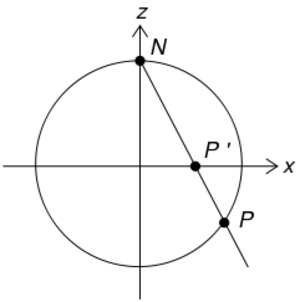 Stereographic projection of the unit sphere from the north pole onto the plane z = 0, shown here in cross section

This section focuses on the projection of the unit sphere from the north pole onto the plane through the equator. Other formulations are treated in later sections.

For any point P on M, there is a unique line through N and P, and this line intersects the plane z = 0 in exactly one point P

' . Define the stereographic projection of P to be this point P

For the stereographic projection to be performed on a computer, it must be expressed by explicit formulas. In Cartesian coordinates (x, y, z) on the sphere and (X, Y) on the plane, the projection and its inverse are given by the formulas

In spherical coordinates (φ, θ) on the sphere (with φ the zenith and θ the azimuth) and polar coordinates (R, Θ) on the plane, the projection and its inverse are

Here, φ is understood to have value π when R = 0. Also, there are many ways to rewrite these formulas using trigonometric identities. In cylindrical coordinates (r, θ, z) on the sphere and polar coordinates (R, Θ) on the plane, the projection and its inverse are

The projection is not defined at the projection point N = (0, 0, 1). Small neighborhoods of this point are sent to subsets of the plane far away from (0, 0). The closer P is to (0, 0, 1), the more distant its image is from (0, 0) in the plane. For this reason it is common to speak of (0, 0, 1) as mapping to "infinity" in the plane, and of the sphere as completing the plane by adding a "point at infinity". This notion finds utility in projective geometry and complex analysis. On a merely topological level, it illustrates how the sphere is homeomorphic to the one point compactification of the plane. 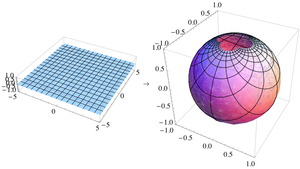 A Cartesian grid on the plane appears distorted on the sphere. The grid lines are still perpendicular, but the areas of the grid squares shrink as they approach the north pole. 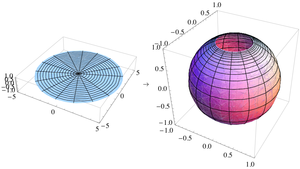 A polar grid on the plane appears distorted on the sphere. The grid curves are still perpendicular, but the areas of the grid sectors shrink as they approach the north pole. 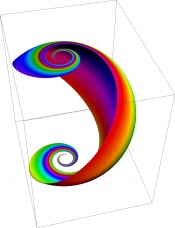 The sphere, with various loxodromes shown in distinct colors

-
Wulff net or stereonet, used for making plots of the stereographic projection by hand

Stereographic projection plots can be carried out by a computer using the explicit formulas given above. However, for graphing by hand these formulas are unwieldy; instead, it is common to use graph paper designed specifically for the task. To make this graph paper, one places a grid of parallels and meridians on the hemisphere, and then stereographically projects these curves to the disk. The result is called a stereonet or Wulff net (named for the Russian mineralogist George (Yuri Viktorovich) Wulff [5]).

In the figure, the area-distorting property of the stereographic projection can be seen by comparing a grid sector near the center of the net with one at the far right of the net. The two sectors have equal areas on the sphere. On the disk, the latter has nearly four times the area as the former; if one uses finer and finer grids on the sphere, then the ratio of the areas approaches exactly 4.

The angle-preserving property of the projection can be seen by examining the grid lines. Parallels and meridians intersect at right angles on the sphere, and so do their images on the Wulff net.

For an example of the use of the Wulff net, imagine that we have two copies of it on thin paper, one atop the other, aligned and tacked at their mutual center. Suppose that we want to plot the point (0.321, 0.557, -0.766) on the lower unit hemisphere. This point lies on a line oriented 60° counterclockwise from the positive x-axis (or 30° clockwise from the positive y-axis) and 50° below the horizontal plane z = 0. Once these angles are known, there are four steps:

To plot other points, whose angles are not such round numbers as 60° and 50°, one must visually interpolate between the nearest grid lines. It is helpful to have a net with finer spacing than 10°; spacings of 2° are common.

To find the central angle between two points on the sphere based on their stereographic plot, overlay the plot on a Wulff net and rotate the plot about the center until the two points lie on or near a meridian. Then measure the angle between them by counting grid lines along that meridian.

Other formulations and generalizations 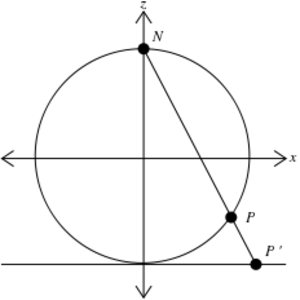 Stereographic projection of the unit sphere from the north pole onto the plane z = −1, shown here in cross section 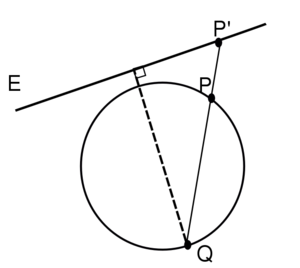 Stereographic projection of a sphere from a point Q onto the plane E, shown here in cross section

In general, one can define a stereographic projection from any point Q on the sphere onto any plane E such that

As long as E meets these conditions, then for any point P other than Q the line through P and Q meets E in exactly one point P′, which is defined to be the stereographic projection of P onto E.[7]

All of the formulations of stereographic projection described thus far have the same essential properties. They are smooth bijections (diffeomorphisms) defined everywhere except at the projection point. They are conformal and not area-preserving. 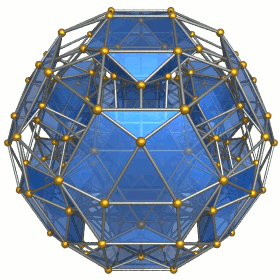 Stereographic projection of a Cantellated 24-cell.

Still more generally, suppose that S is a (nonsingular) quadric hypersurface in the projective space Pn + 1. By definition, S is the locus of zeros of a non-singular quadratic form f(x0, ..., xn + 1) in the homogeneous coordinates xi. Fix any point Q on S and a hyperplane E in Pn + 1 not containing Q. Then the stereographic projection of a point P in S − {Q} is the unique point of intersection of

This construction has special significance in complex analysis. The point (X, Y) in the real plane can be identified with the complex number ζ = X + iY. The stereographic projection from the north pole onto the equatorial plane is then

define a stereographic projection from the south pole onto the equatorial plane. The transition maps between the ζ- and ξ-coordinates are then ζ = 1 / ξ and ξ = 1 / ζ, with ζ approaching 0 as ξ goes to infinity, and vice versa. This facilitates an elegant and useful notion of infinity for the complex numbers and indeed an entire theory of meromorphic functions mapping to the Riemann sphere. The standard metric on the unit sphere agrees with the Fubini-Study metric on the Riemann sphere.

Visualization of lines and planes

Animation of tilt traverse between 4 of the 8 <111> zones in an fcc crystal. Planes edge-on (banded lines) intersect at fixed angles.

However, one can "almost" visualize it as a disk, as follows. Any line through the origin intersects the southern hemisphere

in a point, which can then be stereographically projected to a point on a disk. Horizontal lines intersect the southern hemisphere in two antipodal points along the equator, either of which can be projected to the disk; it is understood that antipodal points on the boundary of the disk represent a single line. (See quotient topology.) So any set of lines through the origin can be pictured, almost perfectly, as a set of points in a disk.

Also, every plane through the origin intersects the unit sphere in a great circle, called the trace of the plane. This circle maps to a circle under stereographic projection. So the projection lets us visualize planes as circular arcs in the disk. Prior to the availability of computers, stereographic projections with great circles often involved drawing large-radius arcs that required use of a beam compass. Computers now make this task much easier.

Further associated with each plane is a unique line, called the plane's pole, that passes through the origin and is perpendicular to the plane. This line can be plotted as a point on the disk just as any line through the origin can. So the stereographic projection also lets us visualize planes as points in the disk. For plots involving many planes, plotting their poles produces a less-cluttered picture than plotting their traces.

This construction is used to visualize directional data in crystallography and geology, as described below.

which gives Euclid's formula for a Pythagorean triple.

Applications to other disciplines

Stereographic projection is used to map the Earth, especially near the poles, but also near other points of interest.

The fact that no map from the sphere to the plane can accurately represent both angles (and thus shapes) and areas is the fundamental problem of cartography. In general, area-preserving map projections are preferred for statistical applications, because they behave well with respect to integration, while angle-preserving (conformal) map projections are preferred for navigation. 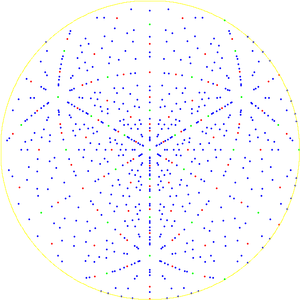 In crystallography, the orientations of crystal axes and faces in three-dimensional space are a central geometric concern, for example in the interpretation of X-ray and electron diffraction patterns. These orientations can be visualized as in the section Visualization of lines and planes above. That is, crystal axes and poles to crystal planes are intersected with the northern hemisphere and then plotted using stereographic projection. A plot of poles is called a pole figure.

In electron diffraction, Kikuchi line pairs appear as bands decorating the intersection between lattice plane traces and the Ewald sphere thus providing experimental access to a crystal's stereographic projection. Model Kikuchi maps in reciprocal space,[9] and fringe visibility maps for use with bend contours in direct space,[10] thus act as road maps for exploring orientation space with crystals in the transmission electron microscope.

These orientations of lines and planes at various scales can be plotted using the methods of the Visualization of lines and planes section above. As in crystallography, planes are typically plotted by their poles. Unlike crystallography, the southern hemisphere is used instead of the northern one (because the geological features in question lie below the Earth's surface). In this context the stereographic projection is often referred to as the equal-angle lower-hemisphere projection. The equal-area lower-hemisphere projection defined by the Lambert azimuthal equal-area projection is also used, especially when the plot is to be subjected to subsequent statistical analysis such as density contouring. 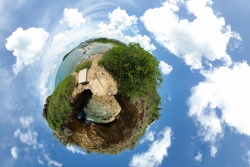 Compared to other azimuthal projections, the stereographic projection tends to produce especially visually pleasing panoramas; this is due to the excellent shape preservation that is a result of the conformality of the projection.