From wiki.gis.com
(Redirected from Street map)
Jump to: navigation, search
For other uses, see Map (disambiguation).

A map is a graphic representation of geographic phenomena—a symbolic depiction of the spatial relationships that phenomena such as objects, regions, or themes have with each other. It is a tool used for performing geographic tasks. Many maps are static two-dimensional, geometrically accurate (or approximately accurate) representations of three-dimensional space, while others are dynamic or interactive, even three-dimensional. While most maps are commonly used to depict geography, maps may represent any space, real or imagined, independent of context or scale in other fields of study (i.e. brain mapping, DNA mapping, extraterrestrial mapping).

Cartography, or map-making is the study, and often the practice, of crafting representations of the Earth upon a flat surface (see History of cartography). One who makes maps is called a cartographer.

Road maps are perhaps the most widely used maps today, and form a subset of navigational maps, which also include aeronautical and nautical charts, railroad network maps, and hiking and bicycling maps. In terms of quantity, local surveys, which are carried out by municipalities, utilities, tax assessors, emergency services providers, and other local agencies, probably make up the greatest number of drawn maps. Many national surveying projects have been carried out by the military, such as the British Ordnance Survey (now a civilian government agency internationally renowned for its comprehensively detailed work). 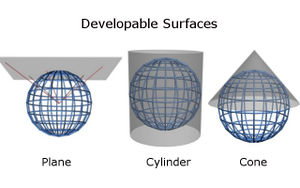 Three of the most commonly used surfaces for map projections are planes, cylinders, and cones. [1]

A map projection is a way of translating the three-dimensional lines of latitude and longitude from the surface of a sphere or geoid to a two-dimensional plane. There are many different types of projections, each capable of maintaining one or more of the properties of area, shape, direction, and distance, though never all at once. The projection selected for a particular map is determined by which properties need to be maintained for the intended use of the map. The three most common projections are cylindrical, conical, and azimuthal (or stereographic). 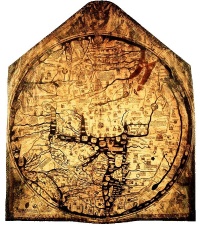 The Hereford Mappa Mundi, about 1300, Hereford Cathedral, England. A classic "T-O" map with Jerusalem at centre, east toward the top, Europe the bottom left and Africa on the right.

The term Orientation (physical) refers to the relationship between directions on a map and compass directions. The word orient is derived from orients, meaning east. In the Middle Ages many maps, including the T and O maps (also known as Beatine or Beatus maps), were drawn with east at the top. Today the most common, but far from universal, cartographic convention is that North is at the top of a map. Examples of maps not oriented to the north are:

Many, but not all, maps are drawn to a scale, often expressed as a ratio such as 1:10,000, meaning that 1 of any unit of measurement on the map corresponds exactly, or approximately, to 10,000 of that same unit on the ground. The scale statement may be taken as exact when the region mapped is small enough for the curvature of the Earth to be neglected, for example in a town planner's city map. Over larger regions where the curvature cannot be ignored we must use map projections from the curved surface of the Earth (sphere or ellipsoid) to the plane. The impossibility of flattening the sphere to the plane implies that no map projection can have constant scale: on most projections the best we can achieve is accurate scale on one or two lines (not necessarily straight) on the projection. Thus for map projections we must introduce the concept of point scale, which is a function of position, and strive to keep its variation within narrow bounds. Although the scale statement is nominal it is usually accurate enough for all but the most precise of measurements.

Scale may be expressed in different ways on maps. As displayed above, ratios or fractions are commonly used (such as 1:10,000 or 1/10,000). Some maps may instead use a verbal or written representation of scale (such as 1.5 inches = 5 miles), and other maps may use graphical representations known as scale bars.

It is important to recognize that even the most accurate maps sacrifice a certain amount of accuracy in scale to deliver a greater visual usefulness. For example, the width of roads and small streams are exaggerated when they are too narrow to be perceived by the naked eye on the map at true scale. The same applies to computer maps, in which the smallest unit is the pixel. For example, a narrow stream must be shown to have the width of a pixel even if at the map scale, it would be only a fraction of the pixel width. 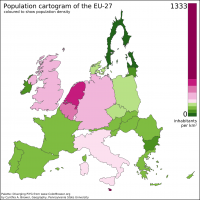 Another example of a distorted scale is the famous London Underground map. The basic geographical structure is respected but the tube lines (and the River Thames) are smoothed to clarify the relationships between stations. Near the centre of the map stations are spaced out more than near the edges of map.

Further inaccuracies may be deliberate. For example, cartographers may simply omit military installations or remove features solely in order to enhance the clarity of the map. For example, a road map may or may not show railroads, smaller waterways or other prominent non-road objects, and even if it does, it may show them less clearly (e.g. dashed or dotted lines/outlines) than the highways. Known as decluttering, the practice makes the subject matter that the user is interested in easier to read, usually without sacrificing overall accuracy. Software-based maps often allow the user to toggle decluttering between ON, OFF and AUTO as needed. In AUTO, the degree of decluttering is adjusted as the user changes the scale being displayed. 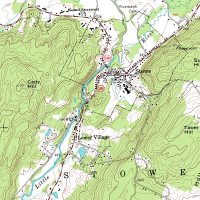 From the last quarter of the 20th century, the indispensable tool of the cartographer has been the computer. Much of cartography, especially at the data-gathering survey level, has been subsumed by Geographic Information Systems (GIS). The functionality of maps has been greatly advanced by technology simplifying the superimposition of spatially located variables onto existing geographical maps. Having local information such as rainfall level, distribution of wildlife, or demographic data integrated within the map allows more efficient analysis and better decision making. In the pre-electronic age, such superimposition of data led Dr. John Snow to discover the cause of cholera. Today, it is used by agencies as diverse as wildlife conservationists and militaries around the world.

Even when GIS is not involved, most cartographers now use a variety of computer graphics programs to generate new maps.

Interactive, computerised maps are commercially available, allowing users to zoom in or zoom out (respectively meaning to increase or decrease the scale), sometimes by replacing one map with another of different scale, centred where possible on the same point. In-car global navigation satellite systems are computerised maps with route-planning and advice facilities which monitor the user's position with the help of satellites. From the computer scientist's point of view, zooming in entails one or a combination of:

Index maps are a type of finding aid that allows users find a set of maps covering their regions of interest along with the name or number of the relevant map sheet. An index map provides geospatial representation on either a sheet of paper or a computer screen. In this way, a map acts as a kind of gazetteer, with the location (such as a call number) represented within a grid overlaying the maps surface.[2]

One important need for geospatial data such as this: political borders often change. Information is being searched by coordinates, rather than the metadata for a particular country and region that can be entered into a catalog. Additionally, in various institutions, maps are sometimes cataloged individually or as sets, resulting in various levels of specificity.

A street map is a map showing roads and streets in a district or entire city. Street maps are great tools for navigating cities, towns or communities. They are available in printed forms, online on the internet or on mobile phones with GPRS connection.

Maps exist of the solar system, and other cosmological features, such as star maps. In addition maps of other bodies such as the Moon and other planets are technically not geological maps.

Many maps are topological in nature, and the distances are completely unimportant, and only the connectivity is significant.

Part of the problem with maps is that people often think that a map shows everything, like a photograph. A map is not a photograph. Maps do not show every bit of information; they are generalized. This generalization limits the usability of the map because of selection, scale, spatial, and distortion when transferring information from the earth (a sphere) to a map (flat).

Selection involves the generalization of maps and the inevitable bias that a map has that a photograph does not. A well-made map shows what the map's creator wants to emphasize, and is inevitably biased.

Scale limitations come from the fact that all maps are scaled down. They show large areas on an area that is small enough to view on that map. This process of scaling down causes generalization that increases (loss of detail) as you decrease from the real-life size of the area being viewed on the map. (Note: Smaller the scale of the map gives less detail.)

Spatial limitations are also inevitable in mapmaking. Maps can only accurately show relationships and characteristics that have some sort of spatial component..[3]

According to Map Use: Reading, Analysis, and Interpretation, there are four main factors that contribute to the popularity and widespread use of maps.

"1. Maps are convenient to use. They are usually small and flat for ease of storage and handling. Thus, they bring reality into a less unwieldy proportion for study.

2. Maps simplify our surroundings. Without them, our world often seems a chaos of unrelated phenomena that we need to organize in order to understand our environment. The section of information found on a map, on the other hand, is clear at a glance. The world becomes intelligible.

3. Maps are credible. They claim to show how things really are. The coordination between symbol and reality seems so straightforward that we're comfortable letting maps 'stand for' the environment. When we manipulate maps, we expect the results to apply to our surroundings. Maps, even more than the printed word, impress people as authentic. We tend to accept the information on maps without question.

4. Maps have a strong visual impact. Maps create a direct, dramatic, and lasting impression of the environment. Their graphic form appeals to our visual sense. It's axiomatic that 'seeing is believing' and 'a picture is worth a thousand words.'"[4]